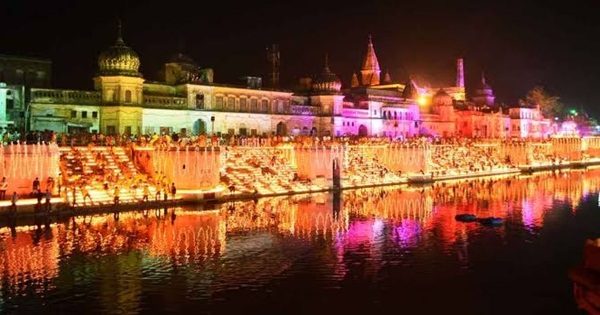 Here is how Ayodhya is described in the original samskrtam version of Valmiki Ramayana, Balakanda Fifth sarga!!

On the banks of river Sarayu, a great and prosperous country named Kosala, abundant in food grains and wealth and inhabited by contended people, was situated.

In the country called Kosala was the famous capital city of Ayodhya built by the lord of men, Manu:

With well-laid out thoroughfares, the beautiful and prosperous city of Ayodhya extended for twelve yojanas in length and three yojanas in breadth.

It looked splendid with its well-laid out and broad highway strewn with flowers and regularly sprinkled with water. King Dasartha, augmenting the prosperity of the great kingdom, lived in the city of Ayodhya like Indra in heaven. The city where all kinds of artificers lived had arched outer gateways, well arranged local markets and all kinds of instruments and weapons.

With matchless splendour, it abounded in eulogists and genealogists. It contained stately edifices decorated with flags and hundreds of sataghnis (missiles). The city with suburban towns on all sides had several female dancers and actors.It was filled with gardens and mango groves. And girdled by sal trees. It was enclosed by strong fortifications and a deep moat. No enemy can ever enter and occupy that city. It abounded with several elephants and horses, cattle, camels and mules. It was embellished with a host of tributary kings who used to pay tributes and with merchants from different countries.

Like Indra’s Amaravati, it was adorned by mountains and mansions with precious stones.

With groups of men and women and adorned with seven-storied palaces, it looked wonderful like a board where the game of ashtapada, is played. It was rich in all kinds of gems. Its dwellings were constructed on levelled ground with no space left unutilised it was abundant stocked with fialgrained rice and water which fasted sweet like sugarcane juice (note the sugarcane for which entire Uttarpradesh is famous for).

The city echoed with the sounds of trumpets, mrudangas, vinas and panavas. There was no city on earth superior to Ayodhya. Like a vimana (note the mention of vimana in Ayodhya city itself) acquired by the siddhas in heaven through their austerities, the palaces were perfectly constructed in rows and inhabited by the noblest of men.

The city was inhabited by thousands of warriors known as maharathas. They were skilled archers and sharphanded. They would not pierce with arrows, solitary persons, persons without defence, fleeing foes who could be tracked down through hints from sound. With sharp arrows or with the strength of their arms, they would kill roaring and inebriated lions, tigers, boars etc. in the forest. It was in that city that king Dasaratha lived.

That city was filled with excellent citizens performing rituals of sacrificial fire, virtuous and well versed in the Vedas and Vedangas. They were generous, truthful and dignified. They were almost equal to rishis and maharshis.

End of the 5th Sarga!

Look at the images below taken during the Sarayu puja and Deepotsav during last Deepavali in 2019 . Look at the city of Ayodhya reflected in the waters of Sarayu. It looks exactly with the same splendor by which it is mentioned in the Valmiki Ramayana!!