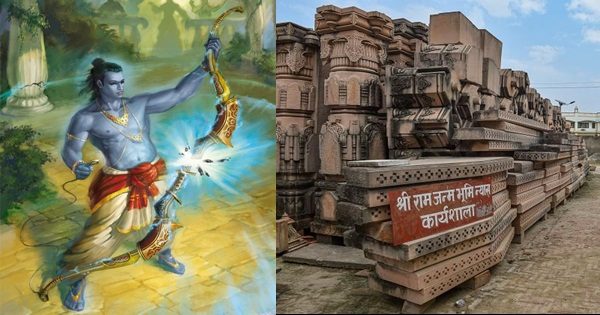 Recently the Nepali Prime Minister Oli made a controversial statement that Ayodhya is in Nepal! Many Nepali historians tried to substantiate it by saying that the distance from the city of Janaka (as per them named as Janakpur) to Ayodhya is traveled in a single day etc.

As a researcher of Mahābhārata and Rāmāyaṇa focusing on the geography I listened to this news and thought it will be dismissed as a freak assertion. But I soon found that due to the general lack of information in public about the very clear statements mentioned in Rāmāyana  about the location of Ayodhya and Mithila (the capital city of king Janaka) a lot of people has taken this seriously and are discussing, debating and arguing about this taking a lot of bandwidth in the news reports, tweets and other social media posts.

Hence, I am presenting the facts by taking the verses from Vālmīki Rāmāyana. Since there are multiple versions of Rāmāyana I am only basing the facts on the critical edition which has excised any later additions in the original Samkrtam version of Vālmīki Rāmāyana and has addressed all issues arising out of its regional variations.

1. The first one is the travel narrative of Sri Rāma and Lakshmana along with the sage Vishvāmitra which starts from Ayodhya but finally ends at Mithila

2. The second one is the travel of the messengers of Mithila to Ayodhya to invite Dasaratha

3. The third one is the travel of Dasaratha from Ayodhya to Mithila to conduct the marriage of Rāma and Sita

4. The fourth one is the travel of Dasaratha with his sons and daughters in laws from Mithila to Ayodhya after the marriage ceremony

This entire narrative is mentioned in the Bāla Kānda of Rāmāyana. In this travel narrative, Sri Rāma with Lakshmana led by the sage Vishvāmitra starts from Ayodhya. First, they reached the Sarayu river which is nearby. Then passing along the Sarayu river bank they went to the Ganga-Sarayu confluence. Here they saw Kamāsrama. From there they went to the domains of Tātaka. After slaying Tātaka they reached Siddhāsrama. There Rāma and Lakshmana protected Vishvāmitra ’s Yajna defending it against the attacks of the Rakshasas like Māricha and Subāhu. After becoming successful in helping Vishvāmitra to do his Yajna, Rāma and Lakshmana followed the sage further in his journeys. He took them to Mithila. In this journey they travel along the Shone (Son) river and reaches the confluence of Shone and Ganga. From there they took a boat and reached the city of Vishala. From there they went north and reached the city of Mithila, ruled by king Janaka.

This is one among the many verses that clearly shows the proximity of Ayodhya to Sarayu river apart from the numerous other verses which unambiguously establish Ayodhya mentioned in Rāmāyaṇa (especially the Ayodhya ruled by king Dasharatha and later by Rāma) to be same as the current location of Ayodhya on the banks of Sarayu. Yojana is used in Rāmāyaṇa to denote the distances ranging from 130 meters (in 70% of cases) to bigger distances like 5.2 km (rarely), 13 km (rarely) and so on. Even the highest value assigned to Yojana won’t allow one to locate Ayodhya in Nepal, at half a Yojana away from Sarayu! 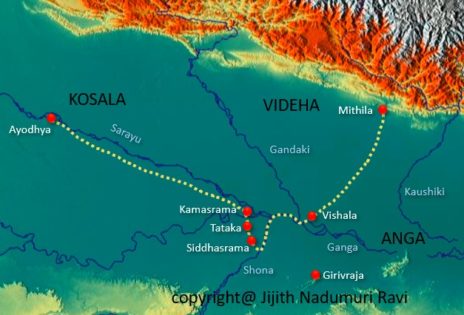 Any doubt in the location in Ayodhya will be cleared as we progress further in this journey.

They saw Kamāsrama near this confluence. This place fell in the domain of Anga Janapada (आङ्गविषय).

From there they reached the domains of Tātaka. This is identified with Arrah close to the banks of the Son river (mentioned in Rāmāyaṇa as Shona) and Ganga river. After this the narrative of the killing of Tātaka by Rāma is mentioned which runs into few chapters. After killing Tātaka they reached the Siddhāsrama nearby.

Then we have the narrative of Rāma defending the Siddhāsrama from the attacks of the Rakshasas protecting it for 6 nights so that Vishvāmitra could do his Yajna successfully. Happy with the outcome, in order to give a favour to Rāma, Vishvāmitra took them to Mithila where king Janaka was arranging a competition to give his beautiful daughter Sita to the brave warrior who can lift a heavy bow and tie its bow-string.

After resting there for the night, they crossed Ganga in a boat arranged by the sages and reached its northern banks. Then they reached the city of Vishāla (identified as Vaishali).

After enjoying the hospitality of king Sumati ruling at Vishāla they set forth to Mithila. Close to the city of Janaka viz Mithila, they saw the āsrama (hermitage).

That was the hermitage of sage Gautama. Here Rāma gave relief to Ahalya the wife of Gautama from a curse.

By going through this narrative containing plenty of geographical data (river names and place-names) we can clearly understand that Ayodhya (near Faizabad in Uttar Pradesh) and Mithila (in Nepal) has retained their name correctly at the right locations even today, aligning well with this narrative. This narrative is thus closely tied with the geography detailed in Vālmīki Rāmāyaṇa and cannot be transposed to any other set of places in the globe. If we analyse the other two narratives the assertion strengthens even further.

Other Travels between Ayodhya and Mithila

At Mithila Rāma lifted the heavy bow used by Shiva and tried to tie the bowstring. Then it broke into two pieces. Seeing this Janaka declared Rāma as a brave warrior worthy of marrying Sita and offered her hand to Rāma as Viryashulka (given in honour of bravery). Rāma wanted the consent of Dasaratha to marry Sita. Janaka sent messengers to Ayodhya to invite Dasaratha to give the consent and to commence the marriage. The messengers travelled for 3 days from Mithila to Ayodhya as shown in the below verse from Vālmīki Rāmāyaṇa critical edition. (Bāla Kānda, Sarga 67, Verse 1). This is the second travel we are examining in detail.

Distance from Mithila (in Nepal) to Ayodhya (near Faizabad) passing along Sarayu river to the Ganga confluence and then passing through Vishala is around 500 km. A horse can travel at 40 km per hour. Traveling for 5 hours each day and taking adequate rest in between and at nights, the messengers can reach Ayodhya correctly after the 3rd night.

Now let us examine the third travel viz the travel of Dasaratha from Ayodhya to Mithila. The following verses make it clear that Dasaratha took four days from Ayodhya to reach the boarder of Videha Janapada (with Mithila as its capital city). More days are taken because unlike the messengers traveling on swift horses, Dasaratha travelled with his priests, wives and the army.

This information corroborates well with the travel of the messengers from Mithila to Ayodhya. Since they reached the boarders of Videha (the kingdom of Janaka) in four days they can reach Mithila in the same day late night or early in the next day. If they travel at a rate of 20 km per hour and travel for 5 hours per day, taking adequate rest in between and at nights, they can reach Mithila along the same path in five days.

The fourth travel between Mithila and Ayodhya is the return journey of Rāma, Bharata, Lakshmana and Satrughna with their wives Sita, Māndavi, Urmila and Srutakirti, along with Dasaratha and others. Here Dasarathi-Rāma encountered his namesake Bhargava-Rāma. There is no distances and time duration mentioned about this travel. But since we have such information from the previously mentioned travel details, it is assumed they travelled in the same way they arrived.

Apart from the above four travel narratives, there are numerous references of Ayodhya as a city that lies along the banks of the Sarayu river which make its identification in Nepal impossible. The following one below is just one among the many such references from Vālmīki Rāmāyaṇa.

निविष्टः सरयूतीरे प्रभूतधनधान्यवान् अयोध्या नाम नगरी तत्रासील् लोकविश्रुता – situated along the banks of Sarayu, with a glorious past, full of wealth and grain is the city named Ayodhya famous in the three worlds. (Vālmīki Rāmāyaṇa 1.5.4).

Even if by the wildest of imagination if anyone locates Ayodhya on a tributary of Sarayu flowing through Nepal like Sharda or Karnali, even then such a location cannot be corroborated with other travel narratives of Rāmāyaṇa, like Rāma’s travel from Ayodhya to south by crossing rivers like Tamasa ( a small tributary of Sarayu to its south), Vedasruti, Gomati (a tributary of Ganga), Syandika, passing through the towns like Sringiverapura and places like Bharadvāja āsrama at Prayaga to reach Chitrakuta. It cannot be corroborated with Bharata’s messengers traveling from Ayodhya to Kekaya.

Hence there is no way we can identify Ayodhya with any place in Nepal. Instead the Nepal PM should be proud that Janaka’s city Mithila is situated in Nepal. This Mithila in Nepal along with Ayodhya in India should be celebrated together pointing to a shared Rāmāyaṇa heritage of the two countries. That is what both the countries and their people should be proud of.