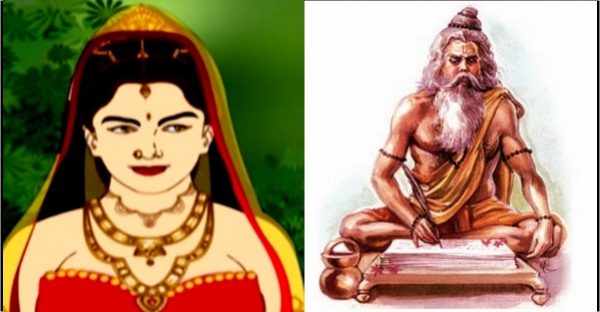 The confusion of the ugliness of Surpanakha is due to the biased understanding many translators have about Rākshasas. The word ‘Rākshasa’ originally had a positive meaning viz.:- protectors, from the word ‘Raksha’ – protection, much like the word ‘Kshatriya’ is derived from ‘Kshatra’ (area, field, territory or region). Like the Kshatriyas, the Rākshasas too were the protectors of territory. The change of meaning from positive to negative or negative to positive is quite common in the long history of Samksrit language. Another derivative of ‘Kshatra’ viz. ‘Kshetriya’ took a negative meaning viz. ‘hereditary disease’, as in Atharvaveda (kṣetriyāt tvā nirṛtyā jāmiśaṃsād druho muñcāmi varuṇasya pāśāt –avs.2.10.1a) while its original meaning was much like Kshatriya, viz. related to a field (Kshatra).

The word Asura was a honorific used even by Indra, found as such in RgVeda, but later in Puranas meant the bad guys (viz. Daityas and Danavas, the ancient cousins of the Adityas, who later parted ways from them, moving westward, occupying today’s Pakistan and later Iran, speaking Avestan and later Persian, evolving a religion of their own viz. Zoroastrianism from which Abrahamism arose (later in the Semitic region).

Similarly the Pishāchas of Kashmir Valley, too were later demonized. Originally ‘Pishācha’ meant yellow skinned or pale skinned, indicating the pale skinned inhabitants of Kashmir (pish: yellow, tawny, reddish-yellow, yellowish-brown or reddish; pitha: yellow) Then they were treated as flesh-eaters (Pishitaa-shanas) and the darkness of their character got attributed into their skin color so that in many Puranas they were called dark skinned.

Due to this confusion, words like Kāmarupini which used to describe the shape of Surpanakha is interpreted as ‘one who can choose any desired form at will, but its original meaning was ‘of desirable / beautiful form’

Almost all our goddesses like Durga, Lakshmi and Sarasvati are described as Kāmarupini in our ancient Samskrit texts, always meaning ‘of beautiful / desirable form’ and never as ‘shape shifters’.

Other words that used to describe Surpanakha are manojñāngī (‘having organs agreeable to mind’, used by Rāma to describe her, in some versions of Vālmiki Rāmayana).

I wish to know about you. Whose (wife) are you? Who are you? Whose (daughter) are you? You are having organs agreeable to mind, and so apparently must be a Rākshasi.

Unlovely and unshapely is she (Sīta), who is no match for you. I am the lone match for you in form, hence see me as your wife.

This disfigured, dishonest, hallow stomached, devilish woman (Sīta) along with that brother of yours (Lakshmana), I will consume.

All of these words of verbal abuse Surpanakha uses against Sīta, due to her hatred and jealousy towards Sīta who is otherwise described as one of the most beautiful women who lived then on earth. Thus we see an example of how a disliked person can be described as ugly looking, even if the person is of agreeable physical attributes.

In response to the abuse of Sīta by Surpanakha, Rāma replies:-

Oh, honorable one, I am married and this is my dear wife (Sīta), thus it will be distressing for your sort of females to live with a co-wife.

The reason why Lakshmana cut the nose and ears of Surpanakha and made her virūpā (disfigured) is because she called Sīta as virūpā, asatī, karālā, nirṇatodarī etc multiple times and tried to attack and kill her.

After clarifying that Sīta is his dear wife, Rāma in jest ask Surpanakha to try her luck with his brother Lakshmana, probably to ward her off from Sīta who felt uncomfortable with the advances of Surpanakha towards her husband.

He is my younger brother named Lakshmana, he is with a good conduct, good looking, a promising and valiant one, and he is without a wife. He is without a wife and in need of a wife he is youthful, good-looking and he can become a fitly husband of yours, fit enough to your kind of features. You woo him, oh, wide eyed one, this brother of mine as your husband like sunshine seeking Mēru, then oh, you of great waist, and you will be without a co-wife.

I, with my best complexion will be your deserving wife befitting to you charm, you can happily take a trip all over Dandaka forest along with me.

How you wish to become a female servant, oh, lotus-colored one, by becoming the wife of a servant like me? I am just a vassal of my adorable brother. Oh, wide eyed one, befitting to your blemish-less complexion, you better become the wife of my brother Rāma who is abounding in means, and on becoming the younger wife of that adorable one, you too will achieve your means and thus you will be happy. On discarding her who is disfigured, untruthful, devilish, hallow-stomached, old wife (viz. Sīta) that Rāma will adore you alone. (This is a rhetoric to Shurpanakha’s own abusive words describing Sīta, a few moments before). Oh, best complexioned one having the best waist, is there any wise men to simply discard your kind of great beauty, indeed, in preference to human females?

Tenacious of her who is disfigured, untruthful, devilish, hallow-stomached old wife of yours you are not giving importance to me. Now I wish to consume this human female right before your very eyes, and then I can happily make merry along with you, without worrying about a co-wife.

Lakshmana said things in jest, but this cruel and anārya (uncultured) one took it otherwise. Oh, Saumitri, watch this gentle Vaidehi, still alive (not yet harmed). She is ugly, untruthful and overtly lustful and big-stomached oh, tiger among men, this Rākshasi deserved to be defaced.

Instead of reading Vālmiki Rāmayana in originals the media and Leftist intellectuals are trying to project Surpanakha as a ‘victim of patriarchy’ whereas as per all accounts of the story, she was the aggressor and almost a female-rapist.