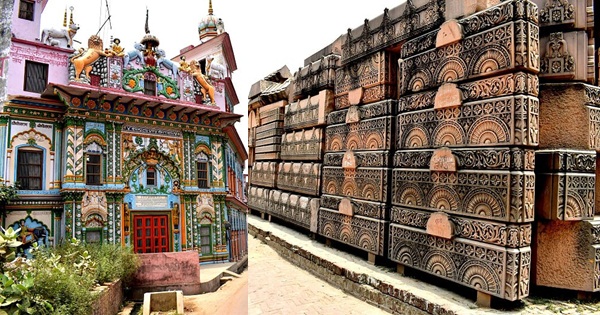 Ayodhya is a mesmerizing town. It is untouched by modern civilization and the perils it brings. Unlike Kanpur, Prayagraj, Mathura, Lucknow and other historical cities, Ayodhya remained out of public memory because of the aura surrounding the city. It has in fact proved to be a boon for the city as it retains its glorious past and is completely non crowded.

Every inch of the town is drenched in the name of Ram and Sita. Ram and Sita drive the entire economy of the town. I will today take you to the pictorial journey of my visit to this forgotten town that is now being revived in the public memory with renovation efforts of the government. 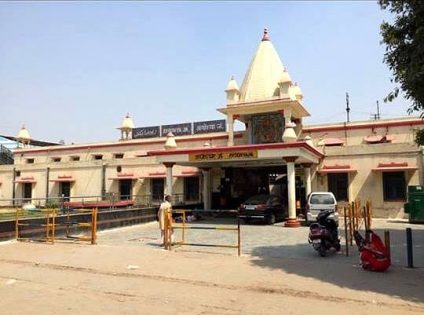 The Ayodhya station is small, but neat and clean. The station is full of imagery of Ram Parivar and couplets from Ramayana are depicted everywhere. One could see the monkeys all over the ancient city and people don’t mind their existence at all.

The city is lined up with temples. Almost every second house or haveli has a big courtyard. Their home deity either Rama and Sita, Krishna and Radha and even Kali can be seen adorning their vigrahas. 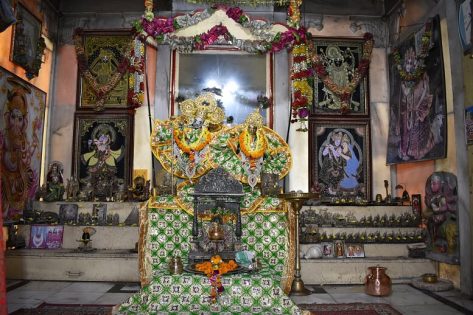 The first such temple I visited was an old Radha Krishna Temple. It must be a 200 year old temple. It was an amazing experience to see it in a such a well maintained condition. There are numerous Shaligrams carefully lined up alongside Radha Krishna. 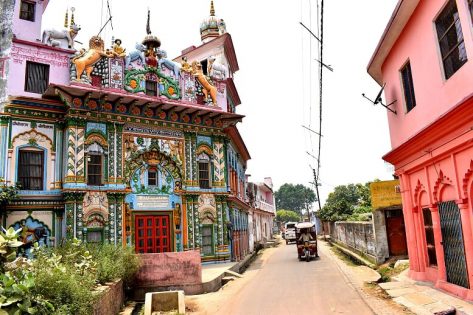 You can see such colorful and ornate temples in every lane, by every road, corner. The two fish motif is also fairly common sight on houses, temples and havelis. Many such temples have Vishnu avatars worshipped in south Indian style as well. Some people claim that Ayodhya has over 7000 temples. iT does not seem to be an exaggerated number! 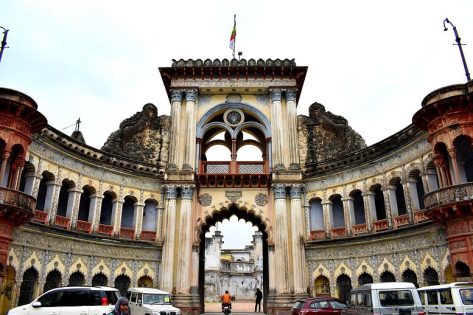 The majestic Ayodhya Palace is a huge landscape. There are wide open spaces at every entry. You can see the palace after you cross three huge gates.  The current Raja Bimlendu Moan Pratap Mishra resides in the palace with his family and their children. The palace is now turned into a hotel. 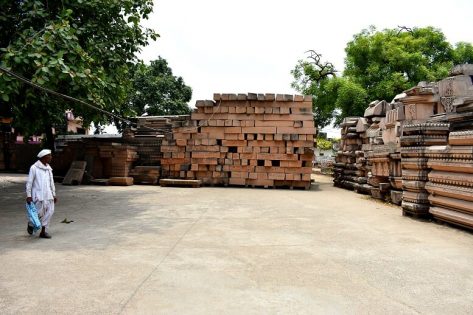 Such sights are common across Ayodhya where both cows and monkeys are revered and respected.

River Saryu flows gently across Ayodhya. This is the same river that has given life giving water to people of Ayodhya since the era of Ram. It is the same river in which Ram, at the end of his avatar took ‘Jal Samadhi’ before appearing as Vishnu and going back to Vaikuntha.  You can take a bath in the river and perform pooja on the banks. 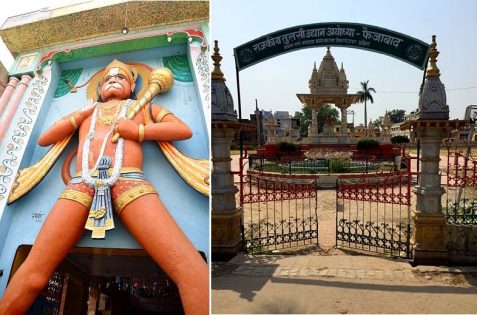 The Bade Hanuman Ji temple (left image above) is also one of the main temples of Ayodhya. Tulsi Vatika (right image above) is a small and neat and clean park that holds the memorial to Sant Gosawami Tulsidasji who wrote Ramayan, the story of Rama. 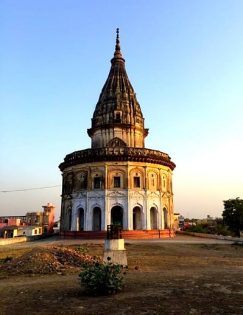 The Raj Dwar Temple atop a hill near Hanumangarhi is also a sight to see. The three hundred year old temple is not visited much by people but holds a neat and clean vigraha managed by some temple priests. 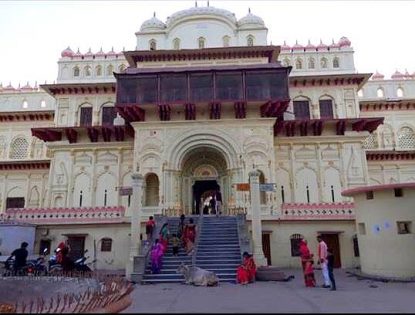 The Magnificient Kanak Bhavan is a 200 year old restored haveli of Shri Sitaji, built at the same place where historical temples once stood dating back to the times of Rama. The Kanak Bhavan was a gift from Kaushalaya Devi, mother of Shri Ram to Sita as a part of welcome to the Dashrath Household. It now holds a vigraha of Ram and Sita that wear only one mala that is wrapped around both of them. The temple also holds Ram and Sita idol as established by Krishna. 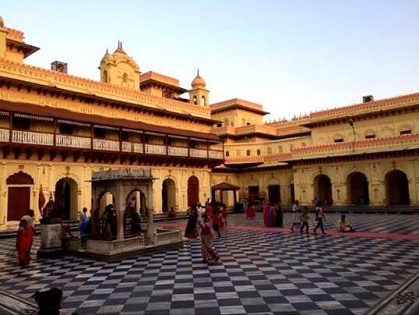 The inside view of Kanak Bhavan. 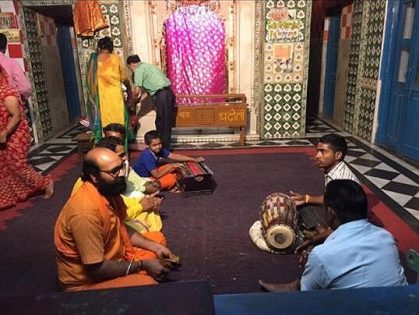 Rama Kirtan being performed along side Kanak Bhavan, where Ram is in the form of a baby. 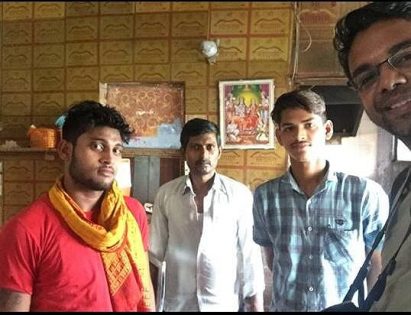 Outside Kanak Bhavan is the ‘Sita ki Rasoi’, a food eating joint controlled by the management of Kanak Bhavan. The joint serves delicious home cooked thali. You can have lunch and dinner here only. (The author of this piece with the cooks of the Rasoi in above image). 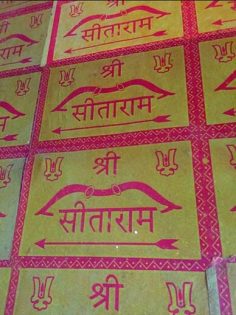 The Sita Ram wall paper is built out of cow dung. It was very interesting thing to see.

As you come out of Kanak Bhavan Lane you will come across Dashrath Mahal, the Palace of Raja Dashrath. The palace is again a huge property with many courtyards before the main temple appears. You can see a lot of sadhus actively roaming around here. Notice the two fish motif here as well. Two fish together are considered to be lucky. Also notice Ayodhya is written as AyodhyaJi showing mark of respect for the city. 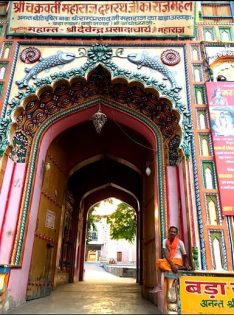 The above image is the main entrance to the sprawling complex of Shri Dashrath Mahal. Dashrath literally meant one whose chariot can go in all ten directions. The current Palace is a huge area with walk ways and places for saints to stay. A dedicated temple inside the premises has Ram, Sita, Bharat, Shatrughan, and Lakshman in its vigraha. 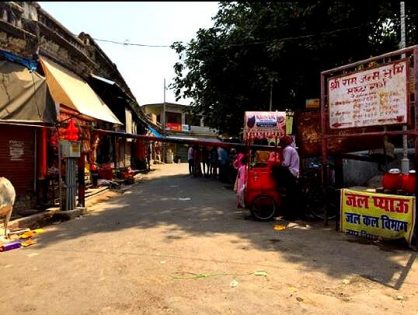 The above image is the way to Ram Janambhumi temple. The whole area is barricaded and you have to walk almost a mile in high security to need to be deposited at this point. 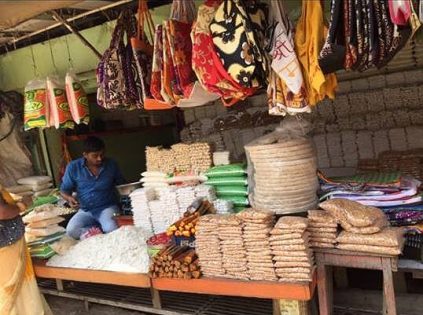 The shopkeepers in Ayodhya – men, women and children arrange their shops neatly and sit after a bath in the morning. It was a delight to see neat and clean shops and roads. There was a lot of praise for Shri Yogi Aditya Nath Government for the developmental work carried out in the last two years. 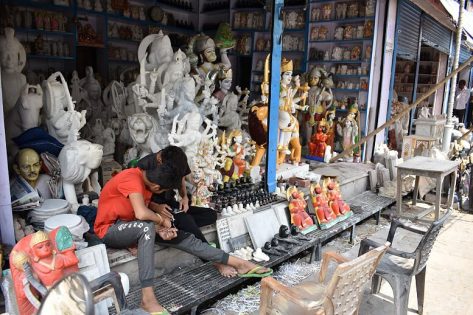 Hello! God calling?  Youngsters sit in their shop with their heads buried in the phones as countless Gods and Goddesses carved in different stones stand neatly arranged. 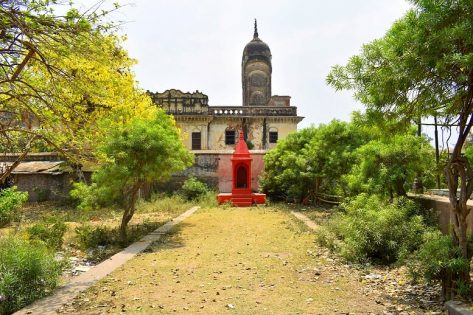 A small temple, possibly a place for Ganesha or tulsi, coloured in saffron stands alone inside a huge complex. 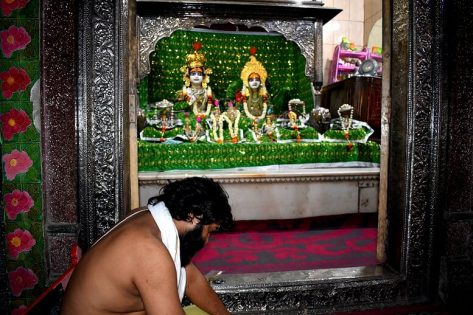 Inside another Ram Temple with Ram and Sita in the vigraha. The temple belongs to the current petitioner in the disputed Ram Janambhumi Case. The temple complex had a huge hall named as ‘Sita Ki Rasoi’ as well. 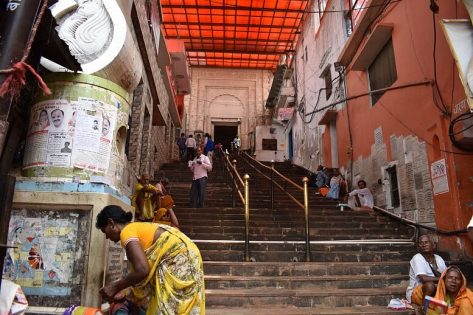 Hanuman Garhi Temple: Hanumangarhi Temple is a major Hanuman Temple in Ayodhya. 76 steps lead to the huge temple premises where Hanuman resides with his mother Anjani. It is said Hanuman used to sit here protecting the Palace of Ram. People visit Hanuman Garhi temple before visiting the Janambhoomi Site. 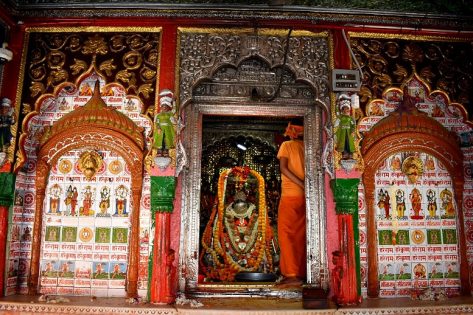 The main deity inside the Hanuman Garhi Temple. 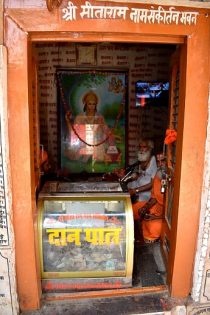 Almost all major Ram Temples hold non stop kirtan or singing of Ram and Sita’s name in their premises. This one is at Hanuman Garhi Temple. 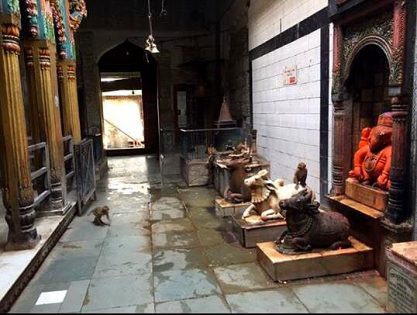 Two monkeys play on Nandi Statues as Ganesha overlooks the Shiva Lingam known as Nageshwar NathJi. The lingam is believed to have been established by Luv and Kush in the memory of their parents Ram and Sita. 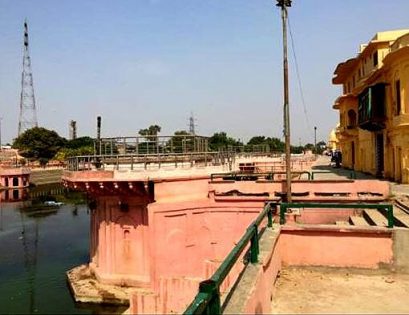 The Ghats of Saryu are getting a makeover by the current government and fresh water will flow soon. The ghats serve as a common platform to celebrate festivals, fairs, events and other activities for people of Ayodhya. 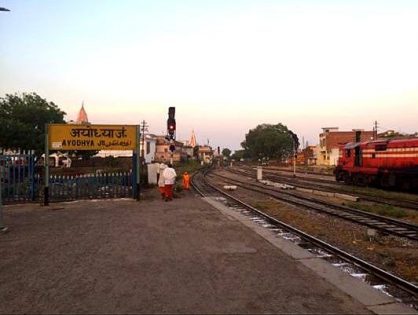 Ayodhya is a charming city. It is untouched by modern civilization and development is just stepping in. I had an amazing stay soaked in the spiritual fervor of Ayodhya and chanting the name of Ram and Sita in their home land. I hope Rama calls me again soon. Iti Ayodhya Darshanam Sampoornam.

Anubhav Gupta is Founder Director of Jeevan Trust (an NGO dedicated to the cause of albinism) and a blogger.