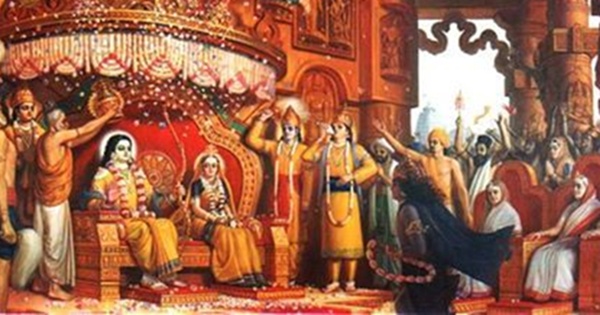 People expect an elected government to create conditions for peace, progress and prosperity. Good governance is a basic requirement for maintaining peace and harmony in any society. However, we notice that good governance has become a rarity in today’s world. A large majority of political, business and other leaders are increasingly engaged in self-serving pursuits of personal glorification and enrichment. The masses have practically no role in governance. Economic progress and prosperity is confined to a handful of top industrialists, who are politically well connected; at the same time the fate of large masses has painfully remained unchanged. Social justice remains a mere slogan at election rallies and in five- star conferences attended by the elite.

A study of ancient scriptures provides answers to the governance issues that we face today. We often hear the mention of ‘Ram Rajya’ as the ideal form of governance. The Ramayana tells us that during the rule of Rama or Ram  Rajya, there was no poverty, pain, grief or discrimination. The term was popularized by Mahatma Gandhi.

In this system, the ruler rules democratically for the happiness and prosperity of people. There are equal rights for everyone. The justice is swift, accessible even by the poorest and the marginalized. The rules are based on truth, non- violence and other moral principles. The stress is on moral authority and self-discipline rather than coercive action. Government aims to uphold truth in its own actions and also expect the same from the people. Respect for all religions and faiths, without discrimination. To summarize this in three words – justice, respect and non-coercion. Such a utopia should have prosperity, dharma and happiness.

While Rama was ruling the kingdom, there were happy families, with no widows to lament, no danger from wild animals, nor any fear born of diseases.

Every creature was full of joy and happiness. Everyone was engaged in pursuit of dharmic actions or virtue. Turning their eyes towards Rama alone, creatures did not kill one another.

All the people were endowed with excellent characteristics. All were engaged in dharma.

The Ramayana underlines that everyone should follow the injunctions of scriptures when faced with difficult situations. A similar message is given in the Gita, “One should understand what duty is and what not duty is by the regulations of scriptures. Acting in accordance with such rules and regulations, one attains spiritual elevation. (Chapter 16.24)

In the Ramayana there is a very touching episode when Bharata goes to the forest to persuade Rama to return to Ayodhya to take up the throne. Rama declines to do so saying that his sacred duty was to abide by the instructions of his father. Having failed in his noble mission, a tearful Bharat seeks Rama’s permission to serve the people of Ayodhya in his name. Rama lovingly advises Bharata about his duty as a ruler in the following verses:

“One who obeys the wise counsel of his teacher, his father, his mother and his master will never stumble even if he follows a wrong path.”

Thus, the Ramayana provides an easy way out to determine what is right; follow the sagacious advice of the elders in family and the learned scholars in society. Besides, the injunctions contained in holy books are a useful guide to a peaceful and spiritualized life.

“A chief or leader should be like the mouth, which is the organ responsible for eating and drinking; but the latter nourishes all the limbs of the body, with due care.” says Tulsidas.

According to Ram Rajya, a leader is expected to look after everyone who need help and support instead of accumulating wealth for himself. His focus should be on public welfare coupled with self – austerity. The message here is one of righteous and ethical conduct. A true leader leads by example and acts as a role model for others.

“Whatever action is performed by a great man, common men follow in his footsteps. And whatever standards he sets by exemplary acts, all the world pursues.” (Chapter 3.21)

To sum up, leadership and governance should be born out of the understanding of the needs of those who would be affected by it with a view to accomplishing universal welfare.

The Ramacharit-Manas of Tulsi has a very apt advice for a benevolent ruler:

Guru Vashistha says to Rama “Listen carefully to Bharata’s humble submission and then reflect upon it.  Further, give due consideration to the views of civil society, advice of the holy persons, political ethics and scriptures; and then do what they enjoin upon you.”

The above verse reveals that the concept of Ram Rajya is one wherein the king takes all important decisions after taking into consideration:

a) views of the civil society;

b) opinion of holy persons;

Such a decision making process will ensure that the policy being framed is in accordance with dharma and for the larger good of society. Thus, Ram Rajya can be ushered even today provided the rulers are willing to abide by and honour the above four conditions as laid down in the Ramayana.

Basant K. Gupta has been a career diplomat and former Ambassador to Rome. He is author of 'Timeless Wisdom from Ancient India', 'Eternal Beauty and Infinite Joy' and 'The Gita-An Eternal Wonder'.