Share
Afghanistan Was Part of Rgvedic Horizon: A Historical Analysis 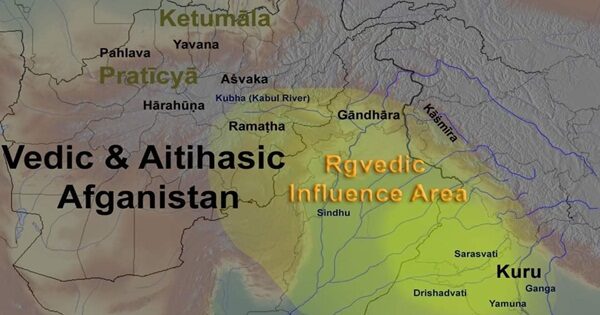 How many of us know that Afghanistan was part of the Rgvedic horizon?
The great river Kubha (Kabul River) a tributary of Sindhu, watered the lands of Afghanistan, the land famous for its horses (Ashva : Af) and hence the name Afghanistan. It is the land of Ashva and the horse-people or the ‘Ashva-Ganas‘ which is rendered as Af-ghana and as Afghanistan. This name is attested in history as Aśvakan and Assakan.
The name Ashvaka is mentioned as a kingdom in the Mahabharata allied to the Kambojas and Gandharas but situated to their west, currently located in Afghanistan.
Here there is a note of caution. Contrary to popular belief, the Gandhara of Shakuni is not the Kandahar province of Afghanistan. Many people without proper research equate the Shakuni’s Gandhara mentioned in the Mahabharata with the whole of Afghanistan and some think that it is the Kandahar Province of Afghanistan. Both are wrong. Mahabharata clearly mentions Takshasila as the prominent city of Gandhara.
Pushkalavati near Charsadda is another Gandhara city during the Mouryan period. Another Gandhara city is Purushapura (Peshawar). All these Gandhara cities are clearly located in Pakistan in its Charsadda Valley and the regions in and around Charsadda. Thus the Gandhara of Shakuni which finds mention in the Mahabharata is the Charsadda Valley. None of them are located in Kandahar or anywhere in Afghanistan.
Why is there a province called Kandahar in Afghanistan? The descendants of Gandhara kings later expanded westwards into Afghanistan and occupied Kandahar and other regions. This is the reason why names like Kandahar exist in Afghanistan.
Much older in Rgveda, the tribes like the Pakthas and the Bhalanas are mentioned. They were even part of the Dasarajnya battle against the Thrstu Bharata king Sudas (who had his Rigvedic kingdom along the Sarasvati and Dhrishadvati region). They were a mountain dwelling tribe. From here the Rgvedic influence area spread to as far as south-eastern Afghanistan as indicated in the map.
Currently the Pakthas are known as the Paktuns (Pashtuns) and Bhalanas those who live in what is now Bolan pass. Though the Pakthas are just a name in Rgveda allied to the Anavas (alternatively the Daityas or the Avastans who later evolved into the Zoroastrians) , their descendants like the Kambojas, etc. are mentioned in the Mahabharata as mountain dwelling war-like people who engage in wars on any side based on payment. War is an occupation for them.
In the Mahabharata, the word Pratichya is used to describe the places currently in Afghanistan. Pratichya means the western regions. Some of the kingdoms in Afghanistan as per the military expedition of the Pandava Nakula are the Ramatas, Harahunas, Pahlavas and the Yavanas in the east to west order. A city and kingdom named Karpasika (Kapisa) too is mentioned in the Puranas and in Panini’s works. This city is in Afghanistan bearing the same name.
Along with the river Kubha (Kabul River) another river Kusava (Kunar River) too is mentioned in the Vedas. It is a tributary of Kubha and flows close to the Af-Pak border. 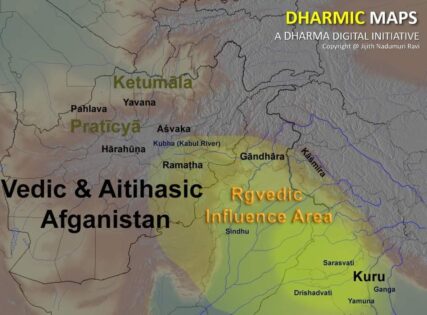 The south western stretch of Pamir mountains passes through Afghanistan. These mountains were called ‘Hindu Kush‘ only since 10th Century CE with the meaning ‘Hindu Killer’. The reason for it is stated as thus:- when Islamic armies abducted Hindus from India to sell them into slave markets of Central Asia, these Hindus would die when reaching these mountains due to extreme cold climates. While the fact that Hindus had to suffer this atrocity because of the barbarity of the Islamic armies is true, the original meaning of Hindu-Kush before this meaning twist occurred is ‘Hindu-Mountains’, because Kuh in Persian means mountain. Thus, Hindu-Kush meant Hindu-Mountain, because it was the mountain encountered by travelers from the West while coming into the regions inhabited by the Hindus (the Sindhu River basin).
Hindu-Kush is also interpreted as Sindhu-Kush meaning water-mountain, because its snow melts into water in summer. Others interpret it as a different rendering of the word ‘Indicus’ (Indian-Caucasus) implying that Hindu-Kush is the Indian equivalent of the Caucasus Mountains of Europe that is located at the intersection of Europe and Asia.
Look what is Afghanistan now after Dharma is wiped off from Afghanistan! The people of Afghanistan abandoned Dharma and embraced the Adharmic religion that spread from Arabia.
Now they are killing each other. Women of 15 to 45 years are abducted and handed over to the Taliban terrorists as brides to satisfy their lust. Everybody is crying for a little mercy. This is the nature of monotheism. It will first kill all the polytheists in a region. Once none of them is left, they turn against their own people. This is also how a biological virus infects a human cell and destroys the entire body eventually. No human being benefits from a religion like this, not even those who are now willing to fight and die for it.
While we celebrate our Independence, Afghanistan stays today as a reminder of what will happen if we abandon Sanatana Dharma and allow the Adharmic religion that has destroyed Afghanistan to spread in our country. We got political independence in 1947. But we have not obtained Dharmic Independence yet, because Sanatana Dharma is still under the tight control of the Adharmic ideologies that have spread from Arabia and West Asia.
Dharmic independence is achieved when all the great lies that sustain Kali Yuga are exposed clearly to everybody who believes in those lies and to everybody who suffers the consequence of believing those lies that has spread from Soviet Russia, Arabia and West Asia.
Like a mentally unstable person turning violent and afflicting the other family members, the people who are under the spell of lies afflict all the people of the country and also harm themselves. This is in its acute state currently in Afghanistan. India too is under the spell of these lies and it is our duty to prevent it from relapsing into the kind of madness that is seen in Afghanistan.
Disclaimer: The views expressed here are solely of the author. My India My Glory does not assume any responsibility for the validity or information or images shared in this article by the author.
The following two tabs change content below.

Hercules and Balarama: The Symbolic and Historical Connections

436 Inscriptional Evidences on Kaliyuga and its Timeline; An Analysis