387 ‘Moplah Martyrs’ to be Removed from Freedom Struggle Dictionary 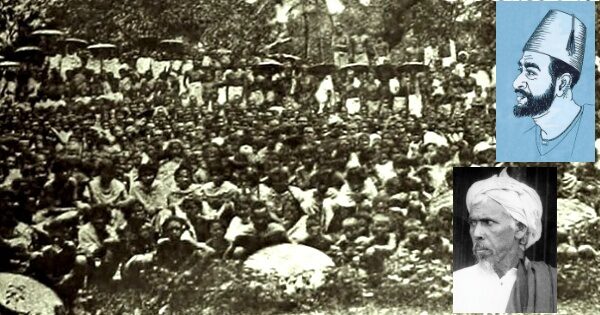 Gratitude to the ICHR and the Government of India for correcting a page of false history that is wrongly inserted into the Indian Freedom Struggle!
The Moplah Riot leaders Varian Kunnat Kunji Mohamad Haji, Ali Musaliar and 387 others will be removed from the Dictionary of Martyrs of India’s Freedom Struggle. A three member panel, which reviewed the entries in the 5th volume of the dictionary brought out by the Indian Council of Historical Research (ICHR) recommended the deletion as it felt that the 1921 Islamic Riots which started since August 20, 1921 and continued into 1922 was never part of the India’s Independence struggle and it was an Islamic fundamentalist movement focused on religious conversion of the polytheist Hindus. 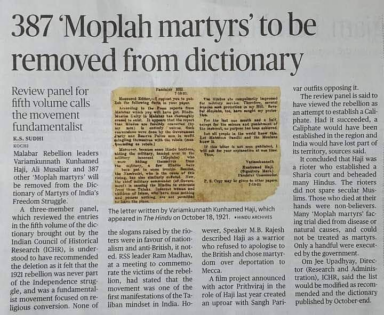 The Moplah riots in Malabar Kerala which occurred exactly 100 years ago in 1921 August was portrayed as part of India’s freedom struggle and as the struggle of peasants against the landlords though it was crystal clear that this was a well planned attack on the polytheist Hindus of Malabar, Kerala, aimed at the establishment of an Islamic Caliphate in Malabar, similar to what we witnessed in Iraq and Syria in 2014-2016 period and what we are seeing in Afghanistan now.
Thousands of Hindus in Kerala were murdered, women raped in front of their children, husbands and parents. Some of them were skinned alive and then burned. The eyes of others were gouged out and many other unheard of tortures were unleashed. The murderers did not even spare little children and unborn babies in the mother’s wombs. Many more were converted when they were threatened with death. In a well near Tuvvur, hundreds of dead bodies of Hindus along with many others who are tortured to near death, but are yet to die were thrown so that they would die a painful death inside the well.
It is good to see that a conclusion is reached on this painful history and this great distortion of history is now getting corrected. We have to analyze the incidents like the Moplah riots with what is currently happening in Afghanistan which is taken over by the Taliban, an Islamic terrorist organization. There, the girls of age 12 to women of 45 age are taken out and married to the Taliban terrorists. Moplah riots have to be analyzed along with what happened in Iraq and Syria in the 2014 to 2016 period where ISIS, an Islamic terrorist group, tortured and raped Yazidi women, killed their men and little children calling them as polytheists. There too, the girls of age 12 to women of 45 age were taken out and married to the ISIS terrorists or sent to slave markets. Similar atrocities are committed by hundreds of other Islamic terror organizations like Boko Haram in several African countries.
Many try to blame RSS, BJP etc for Moplah riots and other such riots . But here are the facts. RSS was founded in 1925, 3 years after the Mopla riots, Jana Sangh in 1951, Janata Party in 1977 and BJP in 1980.

If we examine the reasons for this, we will reach the polytheist Arabia of 7th century. Blame for this goes to the Arab invaders brainwashed by the Abrahamic monotheism from West Asia who forcefully converted the polytheist Arabs of pre Islamic Arabia of 7th century. In the later centuries they similarly converted the Parsis of Iran, the Buddhists of Afghanistan, Central Asia and Xinjian, the Jains and Hindus of India, including the fore fathers of today’s Indian Muslims, by using the fear of death, rape and torture.
The root cause of all these incidents is Abrahamic Monotheism.
Sitaram Goel and Ram Swaroop have diagnosed Abrahamic monotheism and given solutions 30 years ago.
The Arabs were earlier similar to Hindus of India. Like the Hindus, the pre-Islamic Arabs worshiped many goddesses like Allat, Al Ussa, Manat, Shams and many gods like Hubal, Allah, Wadd and so on. For a complete list of Arabian gods and goddesses the reader can access the following scholarship of the scholarAmr-Athtar Yunajjam listed below. The actual religion of these pre-Islamic Arabs was known as Din al-‘Abāʼi-ka or the “Faith of the Forefathers” or alternatively as Din al-Aliha or the “Faith of the Gods”.

2. Ritual and practices in pagan Arabia

If we go through this scholarship detailed in three well researched papers and combine this information with the scholarship of Sitaram Goel, we can understand that the Abrahamic missionaries with a background of Judaism and Christianity migrated from West Asia and settled in Arabia starting in the 6th century. These missionaries propagated the “One and Only One God Theory” (monotheism) to the Arabs. It urged the polytheist Arabs to worship only one god instead of many gods and goddesses. The Judo-Christian missionaries groomed many local Abrahamic missionaries who spoke Arabic in the cities of Mecca and Madina. Some of them started to preach that only Allah among the many gods and goddesses in Arabia is the true god and all others gods and goddesses worshiped in Arabia were false.
The most important shrine of the polytheist Arabs was the Kaaba in the city of Mecca which housed all the regional and pan-Arabian gods and goddesses of the whole Arabian peninsula. Kaaba was thus the center of Arabian syncretism, and Arabian cultural unity where all the regional cultures of the Arabian peninsula had a representation through their regional gods and goddesses. The Kuraishi tribe, a caretaker to Kaaba, housed the icons of Abraham, Mary, Joseph and Jesus into Ka’ba to honour the Abrahamic migrants from Syria and Israel. But the presence of these Abrahamic icons in Kaba was used by the Arabic speaking locally groomed Abrahamic missionaries. They claimed that Ka’ba was originally created by Abraham. The propaganda was so high that eventually the new creed of the locally groomed Arabic speaking Abrahamic monotheists gained strength and destroyed all the icons of the Arabian polytheistic gods and goddesses in Kaaba. The worshipers of other gods and goddesses were massacred brutally, including little children, women and men. All the shrines in Arabia worshipping the Arabian gods and goddesses were destroyed.
The great Arabian polytheist civilization that existed in Arabia for many millennia was destroyed in a matter of a few decades by the introduction of the Abrahamic Monotheism into the Arabian peninsula from West Asia! For more information of the above topics the reader is advised to read the scholarship of Sitaram Goel: HINDU TEMPLES: WHAT HAPPENED TO THEM – Volume II, Section 4, Chapters 9 to 16.


Subsequently, Arabian monotheism spread from Arabia to the African and Asian neighborhoods. Wherever they went, the wealth of the people who refused to convert was taken as booty and distributed among the Arabian monotheist warriors. Their women were taken as sex slaves and distributed among the Arabian monotheist warriors. Due to this, the Arabian monotheism grew by itself sustained by the wealth of those who refused to convert. The sex slaves were used to increase their population.
No army could resist this kind of a brutal and inhuman onslaught which could destroy even civilizations that lasted for millenia. Hence, the Zoroastrians of Iran succumbed to their onslaught. A few escaped took refuge in Gujarat and live today as the Parsis. The Buddhists in Afghanistan, Central Asia, and Xinjian were all forcibly converted. They invaded India as Mughals. They destroyed 1000s of temples, killed many men, women and children and converted many Hindus by the fear of death. They took many women as sex slaves and sent them to slave markets (similar to what we witnessed in Iraq and Syria during ISIS rule in 2014-2016). Since they also raped dead bodies of women, the Rajput women of India, self immolated during the Mughal rule, in a practice called Jauhar, to avoid dishonouring of their dead bodies. In any country of occupation the Arabian monotheists are advised by their religious texts, to divide it into two parts – the place where they are strong in numbers and where their special laws apply (Dar ul Islam) and the place where they are not yet strong (Dar ul Harb) where they need to struggle (Jihad) to turn it into a place where they are strong. This is why the united India is partitioned into Pakistan (Dar ul Islam or the Islamic State) and India (Dar ul Harb). Kashmir was run as a Dar-ul-Islam or Islamic State until the special laws were abrogated by the current Indian government. The Moplah rioters tried to create a similar Islamic State named al-Daula in Malappuram in 1921.
This information is not used to save the people of India from a very real and imminent danger that can strike us as early as 2030 or 2050. Not even the preparedness that we do for the deadly virus, we are doing to prevent the spread of this deadly ideological virus, driven by the false, human-killer concept of monotheism.
Monotheism in its pure form is always violent. It is the largest killer of humanity in the last 2500 years. It is the most powerful predator of human life, stronger than all deadly viruses.
The price of adopting a dangerous ideology that spread from Arabia is suffered by India, Afghanistan, Iran, Iraq, Syria, and many other Islamic countries in Asia and Africa. All that glitters is not gold. An ideology which claims to be peaceful need not be peaceful at all. Rather it is indeed the ideology which is most violent that requires a cover up projecting it as the most peaceful!
If an ideology violently claims itself to be the direct divine messages from the almighty god, and then use rape, murder and violence to shut up any one who question this claim, then it is 100% sure, the opposite is true. It is not inspired by any divinity. It is propelled by human greed to usurp more than what is required to live peacefully.
Even if the monotheists conquer the whole world and convert everybody into their religion, they will divide themselves into sub sects and kill each other as happened in Iran, Iraq, Syria and now happening in Afghanistan. This is the basic nature of monotheism. It creates endless quarrels until the whole of humanity is destroyed. Hence the whole world pays the price of ignoring the root problem (monotheism) and trying to pretend that development of infrastructure will save the people. The whole world is part of this collective lie of ignoring the ideology and always blaming it onto something else.
Disclaimer: The views expressed here are solely of the author. My India My Glory does not assume any responsibility for the validity or information or images shared in this article by the author.