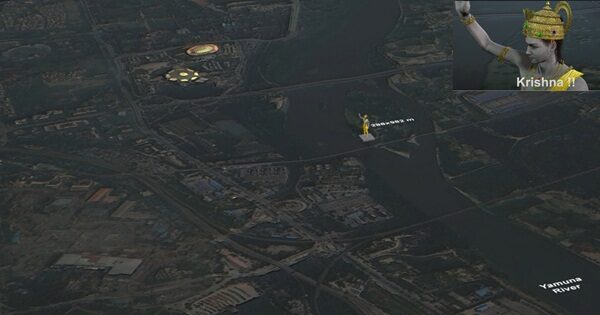 India, that is Bharat as a nation goes beyond 1947, as Bhāratavarṣa! The name Bhārata originated from goddess Bhāratī hailed in the Ṛgveda as the patron goddess of the Bharatas like Devavāta, Divodāsa and Sudās who ruled in a territory that lied between Sarasvati in the west and Yamuna in the east.

Indra was their beloved god.

This sacred region between Yamuna and Sarasvati was called Vara-Pṛthvya (the best place in the world), Uttara-vedi (the northern altar) and Brahmavedi (the altar of Brahma-knowledge). It was called Brahmavarta where all the Vedic Brahmarshis like Vasiṣṭha, Vishvamitra, Vāmadeva, Gautama, Bharadvāja, Gr̥tsamada and others lived. It was called Ilāyas-pada in honour of the oldest ancestor of the Ailās, Bharatas and Pūru, viz goddess Ilā.

Many centuries later, the Pandavas from Hastinapura inherited this ancient Vedic land. But it was then covered by the Khāṇdava forest and scrubs because when the flow of Sarasvati reduced, the settlements migrated to Yamuna and to its east and got established on the banks of Ganga. It was called Kuru-jangala, the forest bushland of the Kurus. In its southern half, Naga Takṣaka allied to Duryodhana was ruling. Its northern half was declared the sacred devata-bhūmī with the energy and aura of Indra too sacred to be dominion of kings.

However the Pandavas turned this adversity into an opportunity. With the direction of the city-builder Krishna, those industrious men created a new city on the banks of Yamuna in a region which we now called Delhi. That ancient city of the Pandavas was named Indraprastha in honour of the most popular Rigvedic devata, viz. Indra which also helped to pacify Indra’s energy and harness it for the well-being of the new kingdom. The palace and the central area of the city of the Pandavas was situated on the banks of Yamuna in what is now Purana-Qila. The outer city where lived all the citizenry, extended beyond Purana Quila to almost all of the current Delhi.

Krishna had already demonstrated his expertise of building the city of Dwaraka in the western coast of Gujarat above the lost ruins of older Harappan cities like Kusashtali. After building the city of Indraprastha, it was Krishna who asked Maya Danava, one of the architect of the Harappan cites to create a Sabha for the Pandavas. After building the Sabha, it was Krishna who advised the Pandavas to build their empire, by eliminating kings like Jarasandha who performed animal sacrifices (Nara-Bali) and by conducting Digvijaya in all the four directions starting from Indraprastha.

Thus, Krishna was instrumental not only in creating Indraprastha city, but also in building a great nation with Indraprastha as its capital for the very first time in our pre-history and history.

Chandragupta Mourya’s empire is comparable but its centre was Pataliputra of Magadha. But Yudhishthira’s new Bhāratavarṣa-empire with Indraprastha as its capital matches much more closely with today’s Indian union.

Today’s India, which is much similar in its form to the Bhāratavarṣa of the Pandavas by several factors,  need to honour Krishna in the same way, in order to make it well rooted into the great Dharmic culture of this great nation and to derive strength from it. This can be achieved by creating a befitting tall statue of Krishna in a place that is most appropriate. It can be built near the Raṣtrapati Bhavan, in front of the new Parliament, at Purana Quila or in a strategically located island in Yamuna. It can be made 100 to 134 meters tall so that it will be visible from all places in Delhi.

In this way, our nation can pay its civilizational debt to our ancestors who gave us Ŗgveda, Bhagavat Gita and all the Dharmic wisdom. It will also energize the entire nation, much like how Ram temple at Ayodhya is energizing the nation. It will propel Bhāratavarṣa, our nation Bhārata, which we now call India into a new super power and enable us to be a great player in the 21st century.

There is no doubt about it.

Let us get back to our roots!

Let us honour Krishna in Delhi as Rāṣtra Purusha! Let us pay respect to him as the founder of Indraprastha and the oldest nationhood of Bhāratavarṣa! Let us create a befitting statue for Krishna at the national capital!

Let our nation soar high in the 21st century!

Featured image and all images designed by the author.