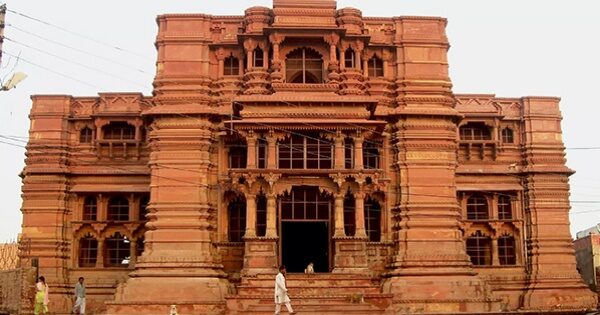 Mathura or Mahaban has been the place of the arrival of the Purushottam Sri Krishna from the Dwapar Yug. He descended in the prison of Kansh in this Mahaban or Mathura. After his death and towards end of Dwapar Yug some 5500 years ago, his grandson Vajranabh launched himself into giving the world a series of living deities of Sri Krishna and erecting some magnificent temples in the memory of Sri Krishna ably assisted by Old Rani Ut, who his mother Usha (Daughter of Banasur and Wife of Anirudh) was the only living being of the Pandava and Kuru family who had seen Sri Krishna Vajranabh was a master sculptor. It was during this time that with encouragement from his mother Usha, he sculpted Sri Krishna Vigrahas remembering his various Leelas. He created 04 Devs – Hari Dev (Goverdhan), Keshava Dev (Mathura), Govind Dev (Vrindavan) and Baldev (Baldeo – Mahavan) and also dedicated the grand temples to the 4 Devs. He constructed the temples at Krishna Janmabhoomi – exactly on top of the Prison Cell where Krishna was born. However, this temple was destroyed and deities lost which modern history has not been able to trace back. All these deities were made up of a special stone called “Bajra Kit”, rendering them absolute strong against all kind of weather conditions. And this is why they even today are equally shining and looks alive. I am fortunate to have had the darshan from a very very close quarter of a few of them which are truly magnificent in their making. What a magician was Maharaj Vajranav, the king of Mathura as coronated by Samrat Yuddhistir.

The next big temple about which we are trying to share some insights about and reminding of our glorious past both historically and from a spiritual relevance, was built during the reign of the Guptas by Emperor Chandragupta Vikramaditya also known Chandragupta II in 400 CE. But what we have read about the legends and from the memoirs of Huen Tsang the Chinese traveller of 06th Century who had visited this temple, while on his travel to Thaneswar (modern day Kurukshetra) brings us to the doorstep of a temple that was believed to have been made by the Gods only. Standing at 250 feet height and visible from 20 kms ahead of Mathura, this beautiful structure was lost to the invasion of Mahamud of Ghazni in 1018 AD and his mindless destruction and religious bigotry. This Temple was such an exquisite structure and a marvel, that it was opined that neither a painting nor a description could do justice to this Celestial Architecture. Some legends say that it might have been built by demon architect Maay Danav or the Architect of the Gods Vishwakarma; such was the beauty. The temple had a huge Ghee Diya at the top around the Kalash being lit and visible from some 06 miles away.

Mahamud of Ghazni was a regular plunderer of Hindustan’s wealth and used to frequent every winter for his loot. In the words of Utbi (Court Historian of Sabaktagin and Mahmmud of Ghazni and who travelled with Mahmmud to Mathura) as mentioned and translated from the original Persian version of the contemporary Arabic chronicle by James Reynolds Al-Kitāb al-Yamīnī  “In the neighboring holy city, identified as Mathura, he (Mahmud of Ghazni) saw a building of exquisite structure, which the inhabitants declared to be the handiwork not of men but of Genii (Jin). The town wall was constructed of hard stone, and had opening on to the river two gates, raised on high, and massive basements to protect them from the floods (since this was located on the banks of Yamuna, which was huge that time and of massive proportions, with seasonal flooding and high current). On the two sides of the city were thousands of houses with idol temples attached, all of masonry and strengthened throughout with bars of iron, and opposite them were other buildings supported on stout wooden pillars. In the middle of the city Avas a temple, larger and finer than the rest, to which neither painting nor description could do justice. The Sultan thus wrote respecting it :— ‘ If any one wished to construct a building equal to it, he would not be able to do so without expending a hundred million dinars, and the work would occupy two hundred years, even though the most able and experienced workmen were employed.’” This magnificent structure finds its mention in the notes of the famous Chinese traveller Huen Tsang who had come to India during the reign of Emperor Harshavardhan of Kanauj or Thaneshwar (present day Kurukshetra).

Utbi further elaborates – Orders were given that “all the temples should be burnt with naphtha and fire, and leveled with the ground.” The city was given up to plunder for twenty days. Among the spoil are said to have been five great idols of pure gold with eyes of rubies and adornments of other precious stones, together with a vast number of smaller silver images, which, when broken up, formed a load for more than a hundred camels. The total value of the spoil has been estimated at three millions of rupees, while the number of Hindus carried away into captivity exceeded 5,000. Nizam-ud-din, Firishta, and the other late Muhammadan historians have confirmed that “They broke up several statues including a large golden image (probably of Krishna with a height of close to 15ft) weighing of 98300 miskals or approximately 456 kgs of pure gold and carried away a sapphire weighing 450 miskals or approximately 2.09 kgs. The Sultan obtained by this victory 185 fine elephants besides other booty only from plundering the Keshava Deo temple.” History provides an account of the genocide and devastation he unleased on the residents of Mathura, Vrindavan, Gokul and other adjoining areas of Krishna Janmabhoomi and also the other temples that he looted. Interestingly these other temples were left out from being plundered because of the sheer number, probably 10,000 plus, but the caravan of 200K Hindu slaves that he took back after the completion of his expedition with him on way to Ghazni, were put to sword around Taxila, which prompted the mountain range to be renamed as the Hindukush (slaughter house of the Hindus).

The present site known as Krishna Janmabhoomi (lit. ’birthplace of Krishna’) was known as Katra (lit. ’market place’) Keshavdeva. The archaeological excavations of the site had revealed pottery and terracotta from 6th century BC clearly pointing to the temple existent and built by Vajranabh and Chandragupta. This grand and opulent structure which was plundered by Mahmud of Ghazni was built around 400 AD. Some late 8th century inscriptions mentions donations to the site by the Rashtrakutas. In 2nd December of 1018AD, Mahmud of Ghazni attacked and plundered Mahaban (Mathura). Ghazni had ordered to burn all the temples and demolish them. He plundered gold and silver idols and carried away a load of some 300 hundred camels and close to 200 elephants.

Unconfirmed sources say that the Idol of Sri Krishna 15ft tall and which was of pure gold and eyes of Sapphire was kept inside the sanctum sanctorum in a hanging state, supported by extremely strong magnets, a technology which we finds mention in the Somanth and Konark Sun Temple’s ancient structure before being plundered by Ghazni and Kalaphad respectively.

Much later in 1672 during the month of Ramzaan when Mughal Emperor Aurangzeb plundered the Fourth version of this beautiful temple made of red Sandstone and an octagonal structure built by the The Legendary King of Bundelkhand Shri Veer Singh Bundela (who also created the Orcha Chaturbhuj Temple and Raja Rani Temple) at Krishna Janmabhoomi. He had donated 81 Metric tonnes of Gold for this opulent structure. Alamgir deliberately destroyed the area around the Prison Room of Devaki and Vasudeva. It is said that Shahi Eidgah was constructed on the sabhamandapa (assembly hall) of the original temple and the Garbha Griha (sanctum sanctorum) was left. It is considered as the place of the prison cell where Krishna is believed to have born. A marble pavilion and an underground prison cell were built on the place with spacious veranda. There is shrine near it dedicated to eight-handed goddess Yogmaya. It is located against the rear wall of the Shahi Eidgah. Although this fact couldn’t be established and in all probability the true Prison Cell of Sri Krishna still lies inside the present day Eidgah.

The last inspection of Krishna Janmabhoomi was done by Alexander Cunnigham and he after taking all due measurements and inspecting the plinth had clearly mentioned in his report the existence of the plinth of a temple on which the diaplated Idghah was standing by him which was around 70 plus feet in width.

To sum up here is the short flow of events pertaining to Krishna Janmabhoomi temple:

2. Second Structure by Chandragupta Vikramaditya in 400CE and destroyed by Mahamud of Ghazni 1018 AD. Finds mention by Hieun Tsang.

3. Third structure by Jajja from the reign of Vijaypal Deva and destroyed by Sikandhar Lodhi around 1510 – 12 CE. It was this temple that was visited by Sri Chaitanya Mahaprabhu and Vallabhacharya.

4. The fourth and last structure was built by the King of Orcha Maharaj Veer Singh Bundela, under the patronage of Mughal Emperor Jahangir, but destroyed by Emperor Aurangazeb in 1670 CE. This was also an opulent structure of Red Sand Stone & finds it mention in the accounts of few British and French travellers like Tavernier.

Surya Roy is an IT professional and an independent researcher of Indic history and culture. He has done his post graduation in Commerce & Logistics management.