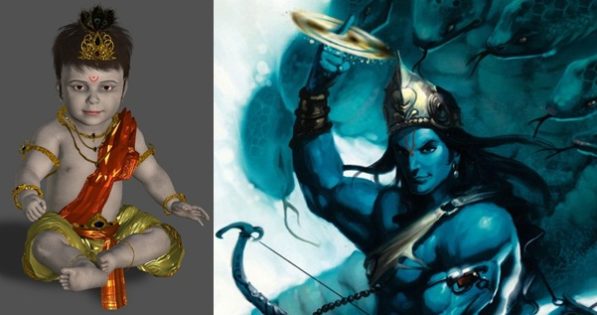 There are two forms of Krishna that has captivated the minds of us Bharatiyas.

The FIRST ONE is Bala Krishna, the little child who is loved by all the mothers. At the time of his birth, the little Krishna showed his mother Devaki and father Vasudeva his virat swarup (great divine form) in the prison house of Kamsa at Mathurapuri. But he made them forget it quickly as it could interfere with a parent’s ability to love a child.

The same memory erasing trick he did to his foster mother Yashoda at Vrindavan. When Krishna ate some soil, mother Yashoda asked him to open his mouth. Inside Krishna’s mouth Yashoda could see the entire Earth with its all beings, the planets, the galaxies and the whole Universe along with Brahma, Vishnu, Maheshvara and all the devatas! He made Yashoda forget all this soon, because knowing that her son is the divine Lord of the Universe, her motherly affection would be affected. It will be difficult for a parent to raise a child knowing that he is god himself. 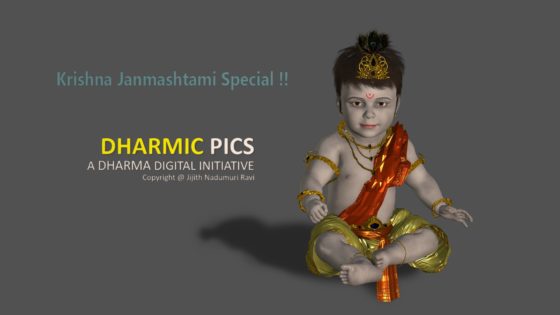 Various other childhood plays or lilaas of Krishna like the Ras Leela where he appeared as dancing with each Gopika of Vrindavana symbolically reveals the deep insights of the Dwaita-Adwaita, Bheda-abheda and Vishista Adwaita Vendantic concepts.

The SECOND is the young and matured Sri Krishna who is actually a great Sanyasi in the garb of a business attire (the business attire of Dwapara Yuga of course) who but knew all of the Samkhya philosophy taught by sage Kapila, who knew every secret knowledge of the Vedanta from his gurus like Ghora Angirasa and others like Sandipani.

This Krishna in his youth and middle ages, not only knew about it as the knowledge received from his gurus, but also experienced the Adwaita bhava by being One with the Universe, through Yoga and ascended his consciousness, becoming its swami or the Lord of the whole Universe with its manifest and unmanifest forms. Krishna reveals this to Arjuna during the Anu Gita discourse at Indraprastha after the Kurukshetra war, that all that he told to Arjuna at Kurukshetra was after immersing in deep Yoga, by being One with the Universe!

Krishna as a political diplomat and war strategist is amazing. He brought victory to king Yudhisthira by advising him to first eliminate Jarasandha of Magadha. With the king’s consent Krishna went to Magadha along with Bhima and Arjuna and with the help of Bhima killed Jarasandha in a duel thus eliminating the last thorn in the path of Yudhisthira to become the emperor of Bharatavarsha. He similarly made alliances with Pandya king Sarangadhwaja who later in the Kurukshetra war sided with the Pandavas and added to the 7 Akshauhini army of the Pandavas.

But Krishna’s real nature is that he is a great Yogi at his very core so that all these strategic moves and external actions don’t perturb the calmness within his mind. He revealed his Adwaita rupa in its Sagunaatmaka bhava as his vishvarupa to his friend and cousin brother turned disciple viz. the Pandava Arjuna.

It is well known that sages like Vasistha, Agastya and Vyasa frequently went to Dwaraka to visit him. Why should these sages and philosophers visit a political diplomat and war strategist like Krishna? Because being a political diplomat and war strategist is his daily job, but he in reality is a niskhama karmi sanyasi, a karma yogi, which is a new way of sanyasa unknown to the sanyasis like Vyasa, Vasistha, Agastya and others!

But like he did in his childhood, Krishna always made sure that he appeared as a normal human being to his friends, cousins and relatives. Those who were aware of this camouflage, like Bhishma, knew Krishna as the great Yogi and Yogeshvara in the inside, but others like Duryodhana took him to be what Krishna wanted others to believe – a cow herd, a chariot driver and an ordinary Yadava prince, who got some little fame because he killed Kamsa at Mathura in his teen age. This is how Duryodhana was fooled into thinking that Krishna’s army is a bigger asset to his Kurukshetra war plans than Krishna himself and why he gave the unarmed Krishna to Arjuna in exchange of Krishna’s cow herd army and was very happy about it. This is why Duryodhana thought of binding Krishna when he came as the messenger of the Pandavas at Hastinapura!

Krishna is a good example for today’s Dharmic leaders – keeping hidden powers and deep knowledge on matters of Dharma hidden within the self. Show to your friends, cousins and acquaintances a presentable, normal persona. Let them rebuke you, let them make jokes at you, let them be happy or unhappy on behalf of you, in your company and in your apparent follies.

But you should continue to work slowly for the ascendance of Dharma! It is difficult to bring about the right perspective today, due to the flood of information. Most Hindus know something. But what they know already is blocking their brains from knowing something more, something more profound than what they already know. This has to be imparted with a lot of patients because people don’t want to be corrected. Trying to correct leads to hostility and leads to aggression!! As a result, the Dharmic warriors and activists groups are splitting up into powerless small groups on silly issues.

Krishna will give all of us more strength and we will achieve success in our mission. May we be able to celebrate Sri Krishna Janmashtami  at the real Sri Krishna Janmasthan at Mathura in the coming years, like the celebrations of festivals of Ram Lalla at Sri Ram Janmasthan in Ayodhya!!

Through the medium of the Dharma Digital platform these two forms of Krishna are revealed here. Dharma Digital is a platform that aims for the Dharmic revival through the Jyotirupas (Virtual Reality Holograms) and Dharmic Lokas (Virtual Worlds) where the future warriors of Dharma can immerse in, interact each other, socialize and meet all our Veda Itihas Pauranic Devatas and personalities to derive Dharmic inspiration. Jyotirupas of more than 122 devatas (Brahma, Vishnu, Maheshvara, Sarasvati, Lakshmi, Parvati, the 12 Adityas like Indra, 11 Rudras, 8 Vasus, 7 Maruts and more)  and aitihasic heroes (Pandavas, Panchali, Sita, Rama, Lakshmana, Bharata, Shatrughna, Parasurama, Vamana, Balarama, Krishna and others) are already created.