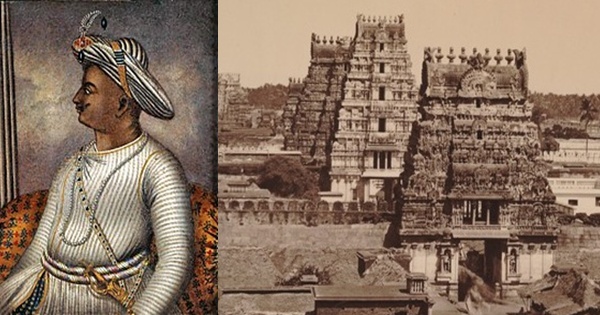 Tipu Sultan wanted to become an Emperor after defeating the British. He wanted to achieve his ambition after consulting the astrologers. There were a few Brahmin astrologers in Sree Ranganatha Swami Temple. They predicted that if some of the suggested remedial rituals were performed, Tipu would achieve his cherished ambition.

Believing that he could become the undisputed ruler of the whole of South India, after defeating the British, he performed all the suggested rituals in the Sree Ranaganatha Swami Temple, besides giving costly presents to the astrologers. This act is being widely interpreted by secularist historians as love and respect for Hindu religion and traditions! They also doubt if there were any Hindu temples which were desecrated or destroyed by Tipu Sultan and his Islamic army in Malabar.

Reputed historian, Lewis Rice, who wrote the History of Mysore after going through various official records, stated as follows: “In the vast empire of Tipu Sultan on the eve of his death, there were only two Hindu temples having daily pujas within the Sreerangapatanam fortress. It is only for the satisfaction of the Brahmin astrologers who used to study his horoscope that Tipu Sultan had spared those two temples. The entire wealth of every Hindu temple was confiscated before 1790 itself mainly to make up for the revenue loss due to total prohibition in the country.”

Thus historical records say, Tipu Sultan spared only two temples and destroyed the rest of the temples in his empire. He destroyed 99.9% of the temples during his military operations. Why Tipu Jayanti is celebrated today with enthusiasm? He destroyed completely the very roots of Hindu culture!

Thali, Thiruvannur, Varackal, Puthur, Govindapuram, Thalikkunnu and other important temples in the town of Kozhikode as well as those nearby were completely destroyed by Tipu Sultan. The devastation caused by Tipu Sultan to the ancient and holy temples of Keraladheeswaram, Thrikkandiyoor and Thriprangatu in Vettum region was terrible.

According to the Malabar Gazetteer by Charles Alexander Innes, the famous and ancient Thirunavaya Temple, known throughout the country as an ancient teaching-centre of the Vedas, revered by the devotees of Vishnu from Tamil Nadu, and existing before the advent of Christ, was also plundered and destroyed by Tipu’s army. William Logan wrote in the Malabar Manual: After dismantling and destroying the idol, Tipu converted the Thrikkavu Temple into an ammunition depot in Ponnani.

Tipu Sultan plundered and destroyed Kotikkunnu, Thrithala, Panniyoor and other family temples of the Zamorin (Hindu monarch of Kozhikode). The famous Sukapuram Temple was also desecrated. Damage done to the Perumparampu Temple and Maranelira Temple of Azhvancherry Thamprakkal (titular head of all Namboodiri Brahmins) in Edappadu, can be seen even today. Vengari Temple and Thrikkulam Temple in Eranadu, Azhinjillam Temple in Ramanattukara, Indyannur Temple, Mannur Temple and many other temples were defiled and damaged extensively during the military regime.

Tipu Sultan reached Guruvayoor Temple only after destroying Mammiyoor Temple and Palayur Christian Church. If the destruction caused by Tipu’s army is not visible today in the Guruvayoor Temple, it is mainly because of the intervention of Hydrose Kutty who had been converted to Islam by Hyder Ali Khan. He secured the safety of the temple and the continuation of land-tax exemption allowed by Hyder Ali earlier, besides the renovation and repairs done by the devotees later.

Damages caused to the nearby temples at Parampathali, Panmayanadu and Vengidangu are visible even today. The deplorable state of the architecture of the sanctum sanctorum of Parampathali Temple destroyed during the military operations of Tipu Sultan is really heart-rending.

Govinda Pillai says in his famous book, History of Literature, “During Malayalam Era 965 corresponding to 1789- 90, Tipu Sultan crossed over to Malabar with an army of uncivilised barbarians. With a sort of fanatical love for Islamic faith, he destroyed many Hindu temples and Christian churches which were the custodians of precious wealth and religious traditions. Besides, Tipu Sultan abducted hundreds of people and forcibly circumcised and converted them to Islam – an act which was considered by them as more than death.”

3. Most Authentic History of Attacks on India from 636 AD: Hindus Killed in Millions.