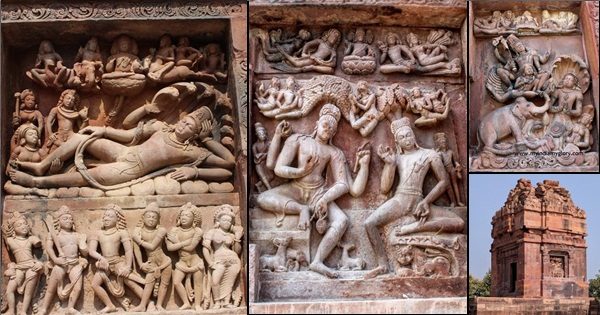 Dashavatar temple! This ancient temple in stone and masonry brick in ruins located in the Betwa River valley at Deogarh in Uttar Pradesh is one of the counted few surviving symbols of our glorious cultural past. The shrine is locally known as Sagar marh. Exhibiting ornate Gupta style architecture, this temple is dedicated to Vishnu. The carvings in the door lintels towards the garbhagriha (sanctum sanctorum), on the panel niches in the exterior walls, and at the base walls will take away one’s breath. They are so exquisite and so divine-like.

This temple with a simple, one cell square plan, is the only standing shrine in ruins at the site. Moorti of Vishnu in the garbhagriha is missing. The base that held the Moorti is there. Our guide said the Moorti was broken and vandalized by Islamic invaders when they destroyed and plundered the site. Signs of desecration by the plunderers are visible in all the carvings. 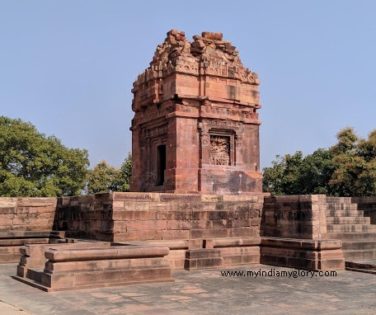 The site originally had nine temples with a Garuda stand in front of the main temple of Vishnu. Bases of all the 8 temples and the Garuda stand are still visible at the site. The Vishnudharmottara Purana finds mention of a ‘Sarvatobhadra temple’ with nine sikharas. The description about this temple exactly matches with this Dashavatar temple at Deogarh. There is also a kund in the temple premise.

Colonial historians have distorted the chronology of Indian historical events. Gupta era that lasted for nearly 300 years is projected to be from 3rd to 6th century CE. But according to Puranas, inscriptions, and several Indian literary historical evidences, Gupta era flourished during the last 300 years of BCE. As per Vedveer Arya’s book Chronology of India, the Gupta era commenced from 335 BCE. Going by this calculation, the Dashavatar temple of Deogarh UP is 2000 plus years old! 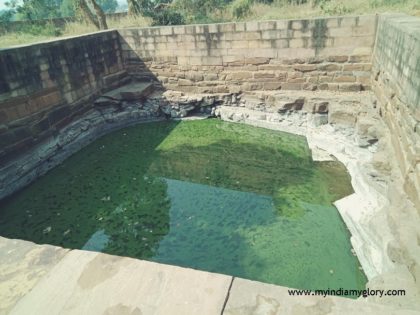 Inscriptions found in the Dashavatar temple site and in more places in Deogarh that house Hindu, Jain and Buddhist shrines prove the region was a flourishing city once upon a time. According to Madho Sarup Vats in his work The Gupta Temple at Deogarh published in the ‘Memoirs of the Archaeological Survey of India’, Deogarh was a connecting point of the ancient trade route that linked then ancient flourishing cities like Kashi, Pataliputra, Sanchi, etc.

Moortis of Ganga on makara (crocodile) and Yamuna on kurma (tortoise), their respective vahanas, adorn the doorway to the garbhagriha. The doorway lintel has carving of four-armed Vishnu seated on Sheshnaga below his hood. He is shown holding a conch shell and a chakra with one hand resting on thigh and the other hand in abhaya mudra (hand held upright with palm facing outwards). In this door lintel panel, Vishnu is flanked by Lakshmi, standing Narasimha in namaste posture, and Vamana. Above towards the left and right are Apsaras and Gandharvas. 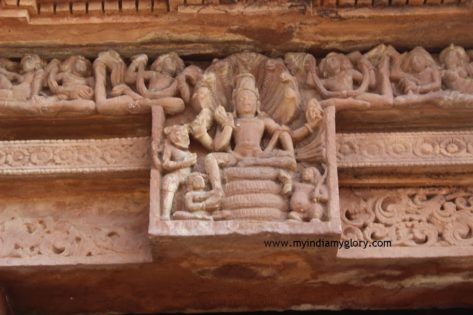 Vishnu in door lintel towards garbhagriha of Dashavatar temple

One can spend hours watching and studying the exquisite carvings of sleeping Vishnu crowned with kiritamukuta on 7-hooded Sheshnaga in this Dashavatar temple. Lakshmi is at Vishnu’s feet with attendants on left flanked by Skanda (Kartikeya), Indra, two-armed four-headed (three clearly visible) Brahma holding kamandalu, Shiva and Parvati on Nandi, and Vayu (few interpret this extreme top-right carving to be a Deva holding garland) on top. I interpret him to be Vayu because only a God can hold a place in a line with other deities. A point to be noticed in this panel is that Brahma at the centre on top is not shown emerging from Vishnu’s navel. Vishnu in this panel symbolizes his resting/sleeping posture after his creation of a new cosmic cycle.

Below are Arjun, Bhim, Yudhisthir, Nakul, Sahadev and Draupadi from the Mahabharata. There are numerous interpretations regarding the Mahabharata theme here with many interpreting them to be dwarpalas of Vishnu and few interpreting them to be Yavanas (Greeks) given their hairstyle. To my viewpoint, this may be true too because during the Maurya period till the Gupta period and later, many Greeks became devotees of Vishnu. There are archaeological evidences of Heliodorus, a Greek ambassador to Mauryan court, who became a Vishnu devotee and built a Vishnu temple and stambh (pillar) now known as Heliodorus pillar. Click here to navigate to the article on Heliodorus. 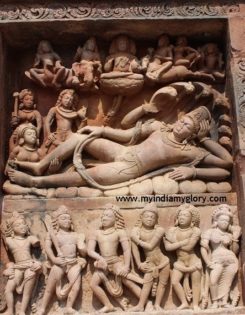 But five warriors with a lady also suggest that they are the Pandavas and Draupadi (if my assumptions/interpretations are right, Draupadi is holding her hair in this carving. The Mahabharata describes that Draupadi didn’t tie her hair for 13 years, owing to a vow that she would tie it until she washed it with blood of Dushshasan who disrobed her and Duryodhana who displayed his thigh asking her to sit on his lap when Pandavas lost the game of dice). There can also be other interpretations on this.

Splendid carvings of Gajendra Moksha in the outer north wall niche of the Dashavatar temple is lifelike. Gajendra (elephant) is portrayed praying to Bhagwan Vishnu for help with his leg inside water being strangled by Makara (crocodile) and his trunk holding a lotus flower as an offering to the deity. Bhagwan Vishnu is shown on Garuda coming to Gajendra’s rescue and liberating him. Sheshnaga is shown trying to save Gajendra too and praying Vishnu for help. There is also a carving of Nagin in one corner. Above the panel are Devas witnessing the act and seen holding a crown to adorn Vishnu. 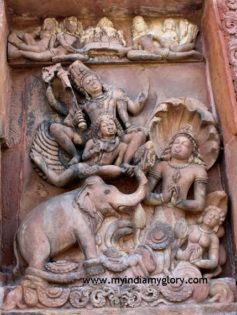 The story of Gajendra Moksha is described in the Bhagavat Purana in the form of a narration by Shuka (son of Rishi Vyas) to Kuru Raja Parikshit. Gajendra achieves moksha, attains the form of a Deva and accompanies Vishnu to Vaikuntha. According to Puranic History, Gajendra was Raja Indradyumna in his past past life who was cursed to be reborn as an elephant and the Makara was a Gandharva Raja named Huhu, who was also cursed to be reborn as a crocodile. Both attained Moksha through the blessings of Vishnu.

On the east side of the exterior wall of the Dashavatar temple are carvings of Nara Narayana in closed eyes, seated in meditation in lalitasana in the panel niche. Lalitasana is a mudra (pose) pertaining to royalty and the deities wherein the Moorti or sculpture of the deity or royal individual portrayed sits on a base with one leg tucked inwards on the seat and the other hanging down and resting on a support or the ground. Nara in the right with two hands and Narayana in the left with four hands in this panel are portrayed as being lost in meditation, both holding rosaries in hand. 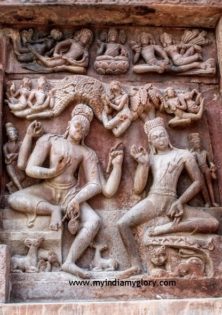 Above are Apsaras (celestial women) flying with cusped hands; they look like holding flower petals to shower on Nara Narayana. Four headed Brahma is shown seated on a lotus with Devas and Apsaras on either side. A lion and a deer relax below the deities. Carvings of trees, Devas, animals and Nara in this panel as a whole symbolize the universe where Dharma prevails and everyone lives in harmony.

Nara Narayana finds description in several Hindu scriptures including the Bhagavat Purana, Harivamsa, and the Mahabharata. Nara is human and Narayana is Vishnu. Nara is the human form of Vishnu and the deity’s eternal companion. In the Mahabharata, Narayana is Vishnu and Arjuna the Nara. Besides, Nara Narayana, who symbolize the preservation of Dharma, is also interpreted as the twin brother of the avatar of Vishnu. 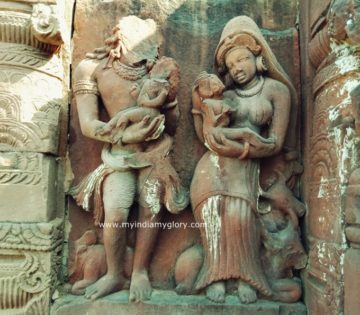 Carvings of couple in Dashavatar temple

Carvings of a couple carrying their children on the base wall of the Dashavatar temple gives us an insight into the lifestyle of the bygone days. Notice the attire the woman is wearing in the above attached image of the carving. It looks more like a lehenga or kurta and chunri or half saree or dupatta. This Gupta era carving prove ancient women in India some 2000 plus years ago wore this. The man is shown wearing dhoti.

Notice the carvings of cows at the backdrop, which may suggest a family keeping cows at home. The carvings may also suggest the babies as twins with the mother feeding one of them and the father holding the other. This is a small glimpse in stone of the lifestyle and family bonding of our ancestors in ancient India! Given the cows at the backdrop, the couple may be Nanda and Yashoda holding Balarama and Krishna respectively. There can be many interpretations on this. 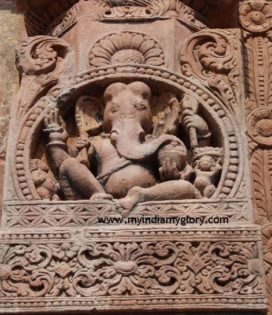 Carving of Ganesha eating laddoos in the wall of Dashavatar temple

Ganesha in iconography is always portrayed having a fat belly which proves the deity loves all things sweet. Many Moortis of Ganesha in the garbhagrihas and in wall panels and pillars in temples across India are portrayed with one hand holding laddoos. Most Moortis show His trunk touching/holding the laddoos to eat. The Dashavatar temple has a Moorti of Ganesha in the exterior wall in similar fashion.

Iron clamps at the foundation base ruins of ancient temples at the Dashavatar temple complex are rust-resistant! These clamps are under the open sky, bearing all weather conditions including rains. But the clamps never rusted! They are as fresh and original. Wonder how ancient Indians are so gifted! Compare these with today’s iron. Even if they are kept indoors under precautions, they rust! 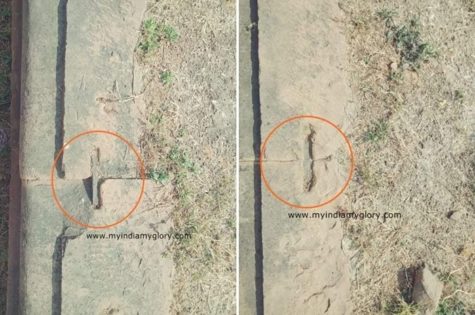 Carving of sound waves (Sankh Dhwani) emanating from a conch shell at the Dashavatar temple wall is intriguing. Our ancient sculptors were so gifted to have gone into the detailing of each and every carving, taking aesthetics into account. This carving is adjacent to carvings of Vishnu sculpture and Nara Narayana sculpture on the temple walls. Notice the finesse and intricacy of the carvings of the sound waves. 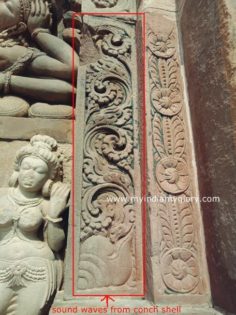 Blowing of the conch shell is a ritual observed in temples and homes before/during a puja. Considered auspicious, the sound that emanates from the conch symbolizes victory and success. In many Hindu homes and temples, the conch is blown in accompaniment with singing of hymns, chanting of mantras, and the sound of bells/cymbals. It was blown during commencement of war in ancient times; Krishna blew the conch shell during the commencement of the Mahabharata war.

When the Dashavatar temple was found in ruins and excavations initiated, many sculptural panels and Moortis were discovered. These are kept in the Delhi museum and other major museums. These sculptures portray scenes from the Ramayana, Mahabharata, and from Puranic History. Ram, Lakshman, Sita, Hanuman, Surpanakha, Krishna, Devaki are few of the characters from the epics and Puranas who are featured. Most ancient and medieval era temples across India depict the four Purusharthas (Dharma, Artha, Kama, Moksh) in the sculptures in the walls and pillars. The Kama aspect is featured by erotic carvings, which are also found in the Dashavatar temple complex.  The sculptures also depict lifestyle, culture, and dressing habits of the people of the Gupta period. 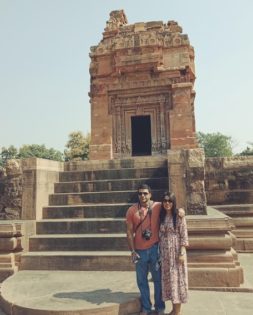 Dashavatar temple is an ancient shrine where Puranic History is brought alive in stone! A bow to our ancient mason and sculptor ancestors who were blessed by Bhagwan Vishwakarma and who created such wonderful sculptural marvels.

All images clicked by Yogaditya Singh Rawal and the author Manoshi Sinha.