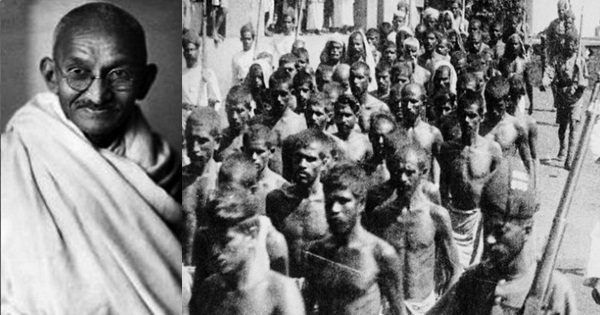 The Moplah riots in Malabar initially started as a fight against the British. But it ended in massacre and displacement of Hindus by Muslims. The British policy of divide and rule could not gain momentum in Malabar given the Hindu-Muslim unity in the region. The British started a propaganda of disseminating info about the Moplah rebellion not as fight against the British for freedom but a Hindu-Muslim conflict. They even distributed pamphlets outside Malabar, thus triggering the conflict between the two faiths.

Ultimately, the Moplah riots saw cruel attacks on Hindus and the nature of crimes committed was so brutal that the same could not be described in words. Gopalan Nair and Diwan Bahadur in their book Moplah Rebellion, 1921 wrote about the the Special Judge who tried the case against the Moplahs remarking thus, “…to my mind this murderous attack indicate something more than mere fanaticism or lust for looting. There is no evidence that the murders were committed because the murdered persons refused to embrace Islam, or resisted the rebels, or refused to show property. The rebels seem to have meant to kill every male in the place whom they could catch hold of, and the only survivors were those who either got away or were left as dead…”

The policy of Muslim Appeasement by Gandhi took front stage with the Khilafat Movement. In the Khilafat conference at Nagpur, the ayats (verses) of the Quran recited by Maulanas on that occasion contained frequent references to jihad against and the killing of kafirs. Swami Shraddhananda drew Gandhiji’s attention to this phase of the Khilafat movement. Gandhi latter smiled and said, “They are alluding to the British bureaucracy.” In reply Swami Shraddhananda said that it was all submersive of the idea of non-violence and when revulsion of feeling came, the Mohammedan Maulanas would not refrain from using these verses against the Hindus.

Later the Musalmans were not in a mood to listen to the advice of Mr. Gandhi. They refused to worship the principle of non-violence. They were not prepared to wait for Swaraj. They were in a hurry to find the most expeditious means of helping Turkey and saving the Khilafat. And the Muslims in their impatience did exactly what the Hindus feared they would do; namely, invite the Afghans to invade India. How far the Khilafatists had proceeded in their negotiations with the Amir of Afghanistan it is not possible to know. But that such a project was entertained by them is beyond.

Mahatma Gandhi had been very punctilious in the matter of condemning any and every act of violence and has forced the Congress, much against its will to condemn it. But Gandhi never protested against such murders. Not only did the Musalmans ever condemn these outrages nor did Gandhi ever called upon the leading Muslims to condemn them. He kept silent. Such an attitude can be explained only on the ground that Gandhi was anxious to preserve Hindu-Muslim unity and did not mind the murders of a few Hindus, if it could be achieved by sacrificing their lives.

This attitude to excuse the Muslims any wrong, lest it should injure the cause of unity, is well illustrated by what Gandhi had to say in the matter of the Moplah riots.

The blood-curdling atrocities committed by the Moplah in Malabar against the Hindus were indescribable. All over Southern India, a wave of horrified feeling had spread among the Hindus of every shade of opinion, which was intensified when certain Khilafat leaders were so misguided as to pass resolutions of “congratulations to the Moplah on the brave fight they were conducting for the sake of religion.” Any person could have said that this was too heavy a price for Hindu-Muslim unity.

But Gandhi was so much obsessed by the necessity of establishing Hindu-Muslim unity that he was prepared to make light of the doings of the Moplahs and the Khilafats who were congratulating them. He spoke of the Moplahs as the “brave God-fearing Moplahs who were fighting for what they consider as religion and in a manner which they consider as religious.”

Speaking of the Muslim silence over the Moplah atrocities Gandhi told the Hindus: “The Hindus must have the courage and the faith to feel that they can protect their religion in spite of such fanatical eruptions. A verbal disapproval by the Musalmans of Moplah madness is no test of Musalmans friendship. The Musalmans must naturally feel the shame and humiliation of the Moplah conduct about forcible conversions and looting, and they must work away so silently and effectively that such a thing might become impossible even on the part of the most fanatical among them. My belief is that the Hindus as a body have received the Moplah madness with equanimity and that the cultured Musalmans are sincerely sorry of the Moplahs perversion of the teaching of the Prophet.”

The Resolution passed by the Working Committee of the Congress on 16th January 1922 on the Moplah atrocities shows how careful the Congress was to not to hurt the feelings of the Musalmans. The Working Committee regrets to find that there have been instances of so-called forcible conversion by some fanatics among Moplahs, but warms the public against believing in the Government and inspired versions. The Report before the Committee says: ‘The families, which have been forcibly converted into Mohammedanism, lived in the neighborhood of Manjeri. It is clear that conversions were forced upon Hindus by a fanatic gang which was always opposed to the Khilafat and Non-co-operation Movement and there were only three cases so far as our information goes.’”

In the Liberator of 26th August 1926 the Swami Shraddhananda said, “The first warning was sounded when the question of condemning the Moplahs for their atrocities on Hindus came up in the Subjects Committee. The original resolution condemned the Moplahs wholesale for the killing of Hindus and burning of Hindu homes and the forcible conversion to Islam. The Hindu members themselves proposed amendments till it was reduced to condemning only certain individuals who had been guilty of the above crimes. But some of the Muslim leaders could not bear this even. Maulana Fakir and other Maulanas, of course, opposed the resolution and there was no wonder. But I was surprised, an out-and-out Nationalist like Maulana Hasrat Mohani opposed the resolution on the ground that the Moplah country no longer remained Dar-ul-Aman but became Dar-ul-Harab and they suspected the Hindus of collusion with the British enemies of the Moplahs. Therefore, the Moplahs were right in presenting the Quran or sword to the Hindus.”

“And if the Hindus became Musalmans to save themselves from death, it was a voluntary change of faith and not forcible conversion—Well, even the harmless resolution condemning some of the Moplahs was not unanimously passed but had to be accepted by a majority of votes only. There were other indications also, showing that the Musalmans considered the Congress to be existing on their sufferance and if there was the least attempt to ignore their idiosyncrasies the superficial unity would be scrapped as under.”

This inhuman defending of the barbaric Moplah atrocities prompted Annie Besant to comment bitterly as MALABAR AGONY in New India 29 Nov. 1921 as from that date [August 1] onwards thousands of the forbidden war-knives were secretly made and hidden away, and on August 20, the rebellion broke out; Khilafat flags were hoisted on police stations and Government offices. …The misery is beyond description. Girl wives, pretty and sweet, with eyes half blind with weeping, distraught with terror; women who have seen their husbands hacked to pieces before their eye, in the way “Moplahs consider religious”, old women tottering, whose faces become written with anguish and who cry at a gentle touch and a kind look, waking out of a stupor of misery only to weep, men who have lost all, hopeless, crushed, desperate.

“… I have walked among thousands of them in refugee camps, and sometimes heavy eyes would lift as a cloth was laid gently on the bare shoulder, and a faint watery smile of surprise would make the face even more piteous than the stupor. Eyes full of appeal, of agonized despair, of hopeless entreaty of helpless anguish, thousands of them camp after camp.…”

“Two Pulayas, lowest of the submerged classes were captured with others and were given the choice between Islam and Death. These, the outcaste of Hinduism, the untouchables, so loved the Hinduism which had been so unkind a step-mother to them that they chose to die Hindus rather than to live Muslim. May the God of both, Muslim and Hindus send His messengers to these heroic souls, and give them rebirth into the Faith for which they died.”

Madhvan Nair, secretary Calicut District Congress Committee had recorded the following in his report:
“Can you conceive of a more ghastly and inhuman crime than the murder of babies and pregnant women? … A pregnant woman carrying 7 months was cut through the abdomen by a rebel and she was seen lying dead with on the way with the dead child projecting out … Another baby of six months was snatched away from the breast of the mother and cut into two pieces. … Are these rebels’ human beings or monsters?”

Maulana Modini called the looting and killing of Hindus ‘military necessity’ while the high priest of Khilafat movement itself, the then Congress High Command applauded Moplahs for fighting devotedly for their religious cause in a way ‘they consider religious’: Men who consider it “religious” to murder, rape, loot, to kill women and little children, cutting down whole families, have to be put under restraint in any civilized society.

One of the favorite myths of the pseudo-secularist is that Moplah atrocity was actually a rebellion against land-owners who ‘happened to be Hindus’. As demonstrated by the large number of swords and knives ornamentally decorated in their handles show how much money and careful planning had gone into these atrocities against Hindus.

Annie Beasant’s report also shatters the myth that Moplah massacre in which by all moderate counts more than 5000 Hindus perished and many families dishonored and converted through sword and rapine, was not against just the ‘high-caste Hindus’ but all Hindus. Just because they were Hindus they were killed. Infants were slaughtered before their mothers because they were born of Hindu parents.