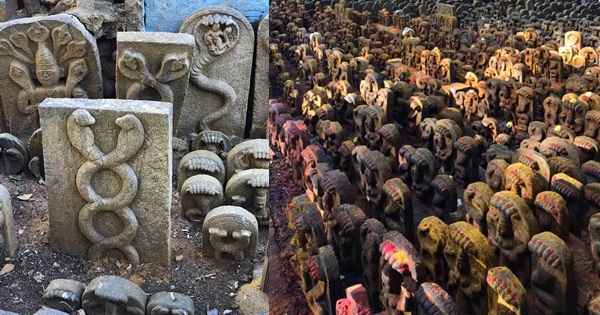 In the Chikkaballapur District of Karnataka, there is a quaint temple associated with Vidura, the great wise man of Mahabharata, whose counsel was ignored by King Dhritrashtra and which ultimately led to the terrible war between the Kauravas and Pandavas.

After the war, which caused innumerable deaths and grievous suffering, Vidura, on the advice of Bhagwan Krishna went on a teertha yatra (pilgrimage) to quieten his mind. He is said to have finally settled down in the Ashram (hermitage) of Maitreya Rishi. Over there, on the suggestion of the Rishi, Vidura planted a sapling of Ashwatha (Sacred fig tree or Ficus Religiosa) and began the practice of worshipping it which he continued until his last day. The stump of the Ashwatha tree still stands today and is the site of a temple known as the Vidurashwatha Temple. 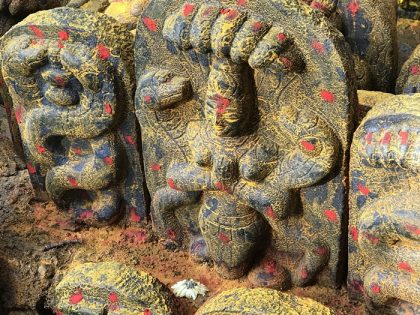 So why does this temple have hundreds of stones bearing the motifs of serpents? It is almost like the famed Terracotta Army of Xian in China except that this is an army of snake stones, the likes of which many might not have seen.

Snakes have been a symbol of fertility in India from ancient times. In other parts of the world too, prior to the takeover by Abrahamic faiths, snakes were associated with sexual reproduction and creation. The Sumerian fertility god Ningizzida was represented by two snakes entwined around a rod from times before 2000 BCE. In southern India, the symbol of two intertwined snakes is often found engraved on stones or painted on houses in villages. 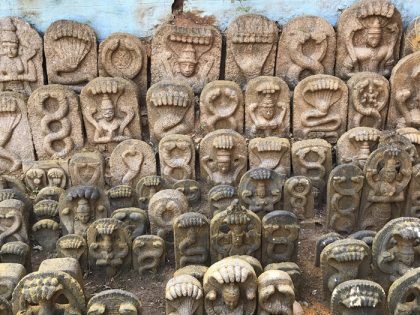 It is considered particularly auspicious to worship the stone symbol of serpents (called Nagapratishta) under the sacred fig tree, especially by those who have an astrological positioning called Sarpa Dosha. It is believed that those who have harmed snakes or nature in general, in a past life end up with Sarpa Dosha which causes loss of fertility. This is why the Vidurashwatha temple has become the site of countless Nagapratishta ceremonies performed by childless couples.

Many of the stones are smeared with haldi (turmeric) and (kumkum) vermillion as part of the rituals. The ancient practices of the land were so intertwined with nature. Plants, trees, animals and planets were given such an important position in our civilization! 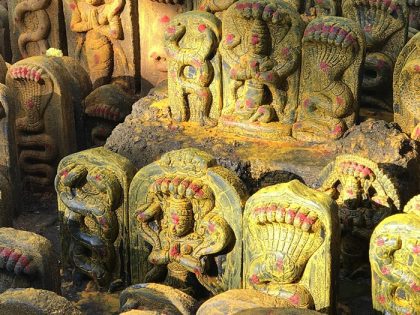 The town of Vidurashwatha also played a role during the freedom struggle against the British. In 1938, it was the site of a tragedy similar to the Jallianwala Bagh massacre. Echoing the call for resistance against the British rule by the Indian National Congress, the Mysore Praja Party used the occasion of the annual four-day temple fair at Vidurashwatha in April 1938 to hoist the Congress tricolour flag.

“When they attempted to hoist the flag on 25th April 1938, the police sub-inspector under strict orders from the Maharaja of Mysore first caned the crowd and then without provocation opened fire. As many as ten blameless persons including pilgrims, one of them a pregnant woman died and 35 were injured in that fateful incident. This incident known as the ‘Vidurashwatha Tragedy’ stirred the Mysoreans into action.” It took nine more years for the British to eventually vacate India. 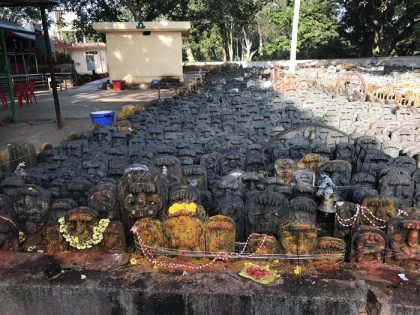 Not far from the temple, there is a memorial erected to commemorate the tragedy; which I could not visit but here is a visual taken from the Star of Mysore paper https://starofmysore.com/satyagraha-at-vidurashvattha/ Sardar Patel and Acharya Kripalani are said to have visited this place which came to be known as “Jallianwala Bagh of the South”.

As I left the temple and moved on to Hindupur, my next destination, I was filled with wonder at the thought that my India trips have never ceased to fill me with wonder. 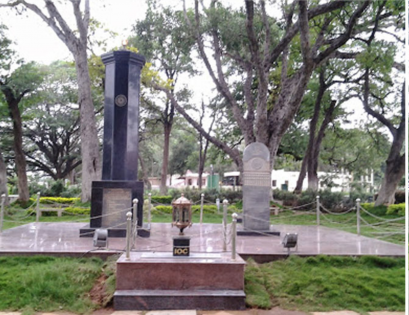