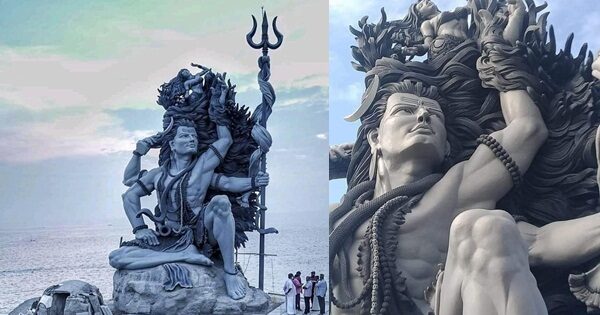 Amazing statue of Gangadhara Shiva unveiled in Tiruvanantapuram. 58 feet tall. Facing the beautiful sea of Kovalam. Facing east, the concrete sculpture visualizes Shiva with his hair flowing in the wind and holding Ganga Devi on his head. The pratima is built in the Azhimala temple premise, an ancient shrine dedicated to Shiva.

Another interesting Dharmic space created near the Azhimala Shiva temple! This imagery is important because it shows an important aspect of the Bharatiya Dharmic tradition.

According to a Matrubhumi report, the Gangadhara Shiva pratima was sculpted by Sculptor PS Devadathan, who graduated in sculpture from Fine Arts College in Thiruvananthapuram. He erected the sculpture on a rock situated at an altitude of 20-feet from the sea. A native of Azhimala, he completed it in six years. Beneath the rock that holds the pratima, there is a cave-like chamber spanning 3,500 sqft where a Dhyana Mandapam is located. There are 27 steps leading to the chamber, which also has carvings of tales on Shiva.

As per an ANI report, quoting General Secy, Azhimala Temple Committee, “Construction of Gangadhara Shiva Roopam statue started in 2014 on Chief priest’s suggestion. It was completed in 2020.” The temple was opened for public on Dec 31, 2020. 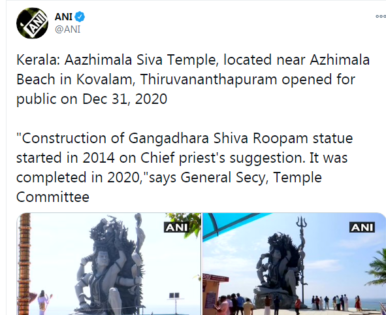 Every Dharmic mind knows Ganga is a river. It is river Ganga that falls from the high Himalayas in the form of multiple streams like strands of hairs, like Alakananda, Mandakini and the other well named glacial streams in and around Gangotri in Uttarakhand.

Yet this geographical situation is beautifully turned into river Ganga falling into the jata hair of Shiva! Then in the next elevating flight of Dharmic samkalpa shakti the river Ganga turns into a beautiful woman Ganga, in fact, the sister of Shiva’s wife Parvati!

It is not stopping even there. This situation of Ganga hidden inside Shiva’s hair is used to create different emotionally tangled narratives involving Shiva, Parvati and Ganga!

It even not ends here! It inspires several shilpis or sculptures like the one who created the Azhimala Gangadhara Shiva, to make beautiful sculptures and statues. It inspires other artists to create beautiful art works, paintings and sketches and dancers to create many dance themes! Thiruvatira folk dance narrate the emotional situation of Shiva, Parvati and Ganga! 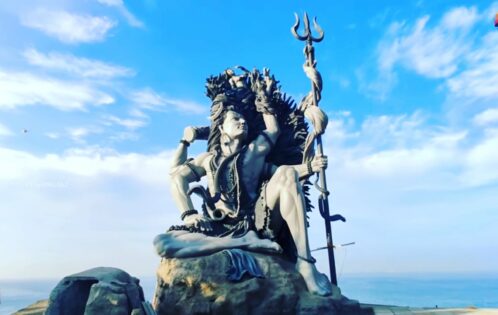 The Mahabharata and Ramayana narrate about Ganga becoming the wife of Bharata king Samtanu and giving birth to Bhishma. A lot of emotional exchanges between Samtanu, Ganga and Bhishma are described! Even Samtanu’s former self’s afterlife life encounter with Ganga as Satabisha in Swarga loka is narrated!!

Our ancient generation had the ability to hold onto both, the fact that Ganga is a river in the real world and that Ganga is a goddess interacting complexly in the consciousness realms with other divinities all embodying sam-kalpanas (approximately called collective cultural imagination or a collective shared dream running into many centuries) all in the terrains and worlds of consciousness. Dharmic thought gives validity to both the realities.

It is the Western thought which usually denies reality to the consciousness realm generated by collective samkalpa shakti unable to recognize that these are like the collective cultural consciousness creating letters, words and grammar for a shared language. If the letters, words and a grammar of a language is real, these divine agents and their interactions are real too.

As if influenced by the dominant paradigm of the current times, today’s Dharmics are unable to hold on both. They are frightened when the real world entity Ganga as a river is studied thinking that it could break their other cultural reality woven in the consciousness for centuries! 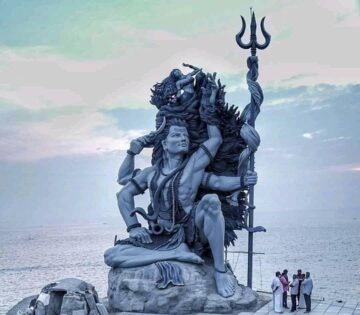 This need to change! We should regain our ability to hold on to both the realities. One doesn’t break the other.