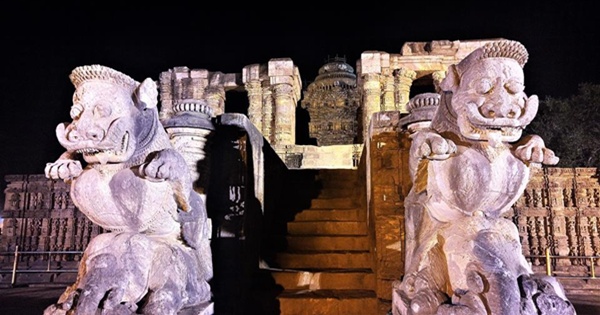 This coastline of Odisha called Konark, situated about 35 kilometres northeast from Puri, adorns a magnificent 13th century Sun temple. The temple was built in around 1250 AD by king Narasimhadeva I of the Eastern Ganga Dynasty. It was built from stone in the form of a colossus chariot drawn by seven horses dedicated to Surya Dev.  When viewed from inland at sunrise, the temple appears emerging from the depths of the blue sea carrying the sun. Besides natural damage, the Konark Sun temple was sacked several times by Islamic invaders in between the 15th and 17th centuries.

Lions guard the steps to the entrance to the Dance Hall (Nata Mandir). In the background, peeping through the pillars, is the great temple. The above image was clicked at night. Konark is open till 8.30pm, and well lit with halogen lights. Konark at night time is an amazing experience. 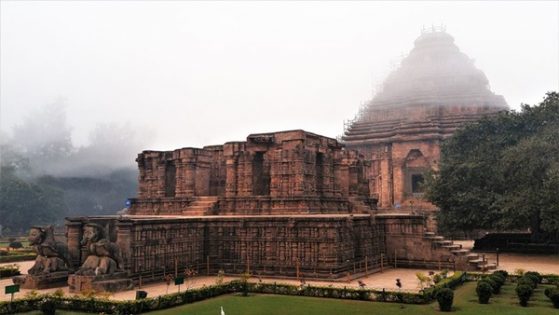 The temple, with a pyramidal roof, is the Community Hall (Jaganmohan) and is 130 feet. The main temple had the Vimana behind it, which was 230 feet, but crumbled in the mid 1850s (this will be cited in the following photographs). 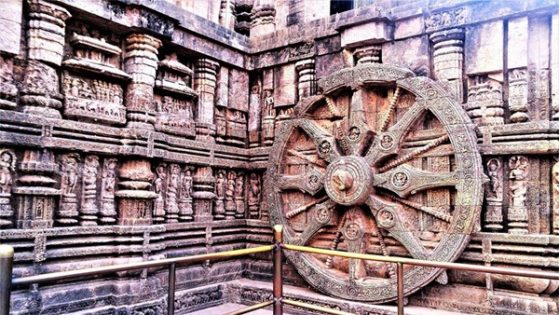 There are 24 wheels around the temple, nearly 10 feet across each. Each corresponds to each hour, as well as each half-month (Shukla Paksha and Krishna Paksha).

The shadows on the wheels correspond perfectly to the hour on the clock. 12 am is at the top, 12 noon at the bottom. 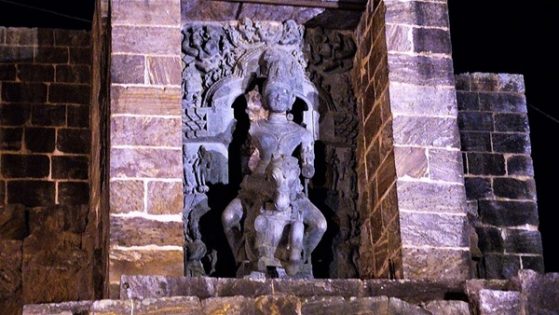 Surya Dev is the presiding deity at Konark Sun temple. There are 3 main statues of Surya (S, W and N wall) and 2 images of Bhairava on the East Wall (front of the temple). This sculpture is from the North Wall. It was clicked during night time. 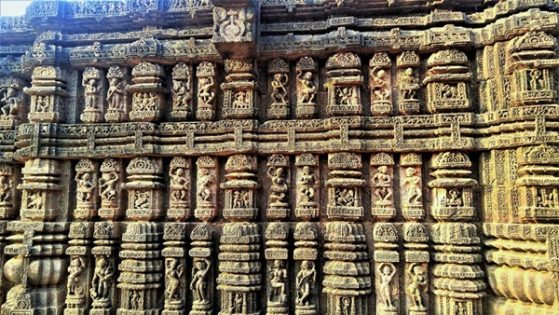 So much is going on in these carvings. In addition to the larger carvings of dancers and damsels, the small carvings are also interesting. These carvings depict: 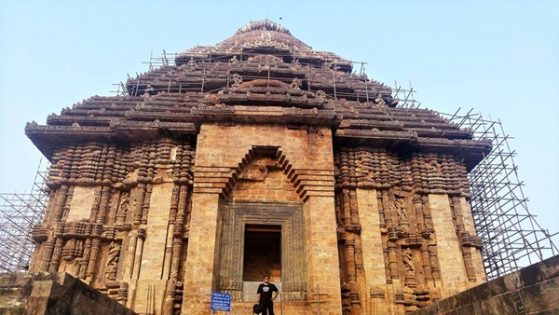 The 127 foot Assembly Hall was dwarfed by the soaring 227 foot Deul (Tower) behind it, which collapsed very probably because its loadstone was removed (either by Kalapahar or the Portuguese). The weight of the loadstone not only held the structure in place by pushing down on it, many opine it was a huge magnet, and pulled together the iron brackets set inside the stones that held the tower together. There are no traces of subsistence, earthquakes or tornadoes.

After the ‘man-made’ collapse of the Deul, the Konark Sun temple has been held together by pressure from rods from the side, gently pushing the superstructure in place. 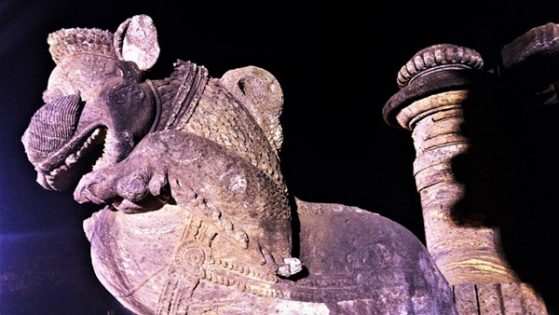 There are two huge lion-guards at the gate of the Nata-Mandir (Dance Hall). They pounce on 2 supine elephants, who themselves rest on humans. The combination is called Gaja-Sumha, a feature of Odisha architecture.

The king who built Konark Sun temple was Langula Narasimhadeva (of the Eastern Gangas). The lions may be a play on his name as well. 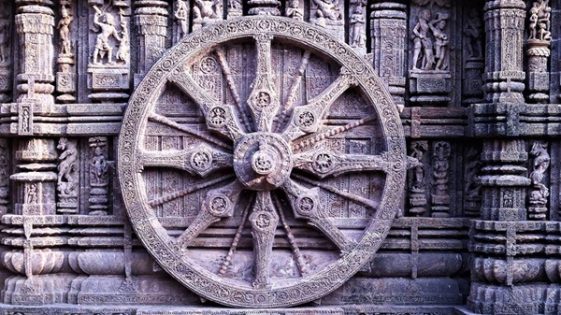 Each wheel is circa 9 feet across, and have 8 spokes. Each spoke, where it bulges at the centre, has a circular medallion, with a carving of an aspect of human life. In this wheel, we can see carvings of hunting scenes, battles, a girl singing, etc. It seems to depict the life of a solider. The carvings outside the wheel conform to this.

On the top left, the soldier is stabbing a beast (a wild boar). On the top right, he is standing, with sword and shield, next to his wife who is suckling a baby. 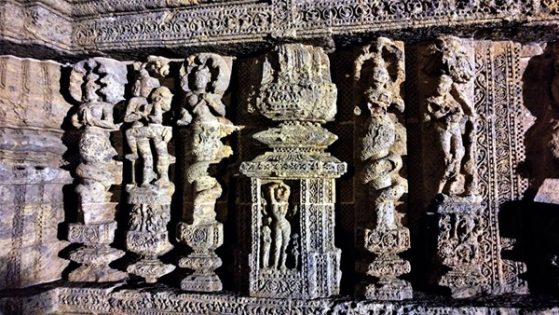 Konark Sun temple is open till 8.30 at night, and when darkness descends and halogen lights fall upon the deep reliefs of the carvings, Konark comes to life in a new dimension.

Note the standing lady inset in the pillar in the centre. She is applying sindoor with her right hand, while looking onto a mirror held by her left hand. She is applying it the traditional way, with her arm arching over her head. Not applied from the front as is done by many modern housewives. 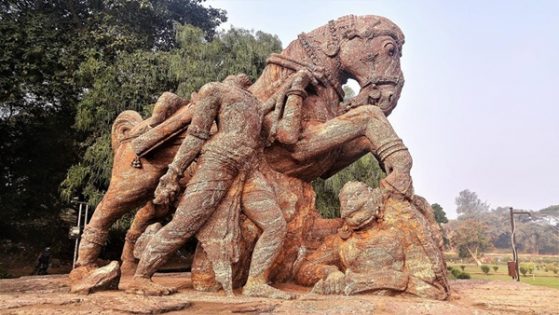 There are 2 sets of war horses on the south side of the temple. While the sculpture appears aesthetic, it is actually an execution scene, with horses trampling to death a cowering offender, who appears an assassin as he is carrying a sword.

Swords were not permitted inside Konark while it was being built, except for select trusted guards and the king. 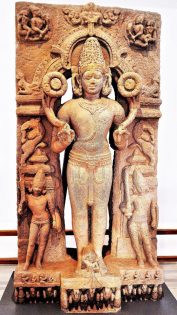 What struck me while taking the photo is the serene smile, a typical feature of Indian sculpture. 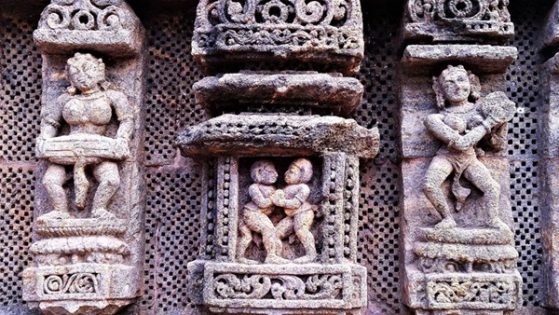 The carving in the middle represents a wrestling scene. Wrestling has a long tradition in India, going back millennia. Observe the intricate lattice work chiselled in the stone. 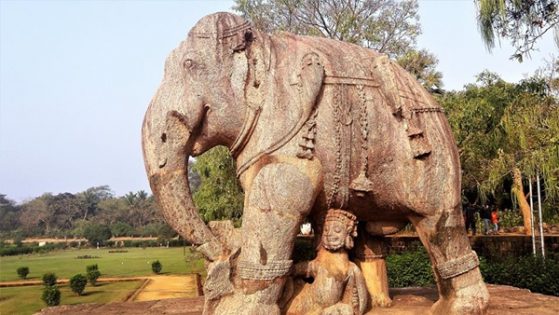 A number of elephants were found at the base of the collapsed Deul (tower). It is assumed that they were at the stairway of the Deul, facing outwards, welcoming people in. They have been relocated to the southern side of and away from the temple.

Here, the elephant is trampling a condemned man, a gruesome 13th century form of public execution. 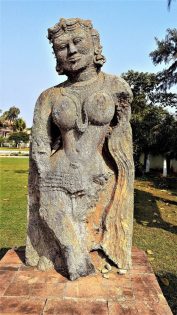 The size of the sculpture of this damsel is nearly life size. The ridges on the curved flowing cloth are noteworthy. The expression is an enigma. Unlike nearly all the other structures at Konark, she is not smiling. Perhaps depicting a royal personage, who has to maintain a dignified aloofness. 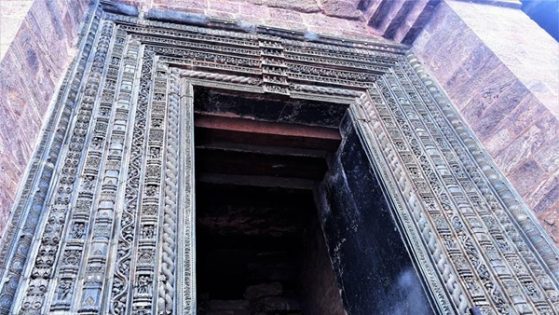 The details on the frame are stupendous. There are nine successive layers of carvings. What is striking are the royal scenes at the top section of the frame.

Some of the rulers appear to have Sinic features and are sporting Sinic caps. Also note the iron beam right inside the door. 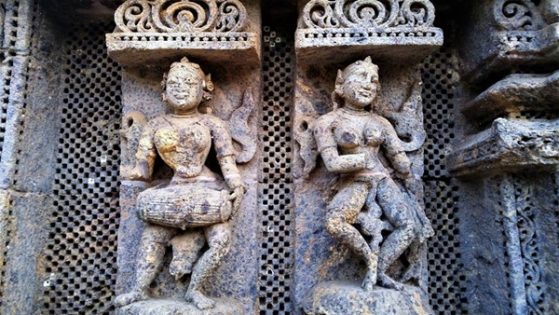 The grace of these statues is incomparable. Note the semi-closed eyes and faint smile. The effort to create the intricate lattice structure behind, by chiselling innumerable individual square holes, must have been stupendous.

Also note the wavy lines behind the characters. What are they? Not wings (for Apsaras). Or their swaying dresses. Are these an early form of abstract symbolism? Like curves in cartoons today denoting motion of a limb? 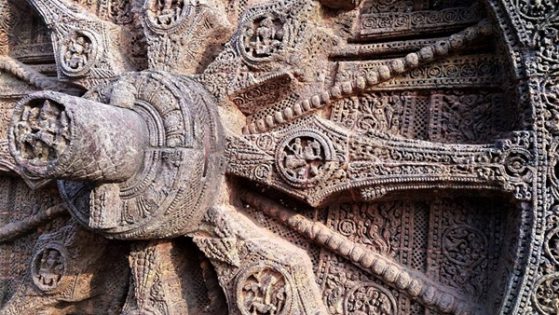 Details from Wheel of Time

The spoke of the Wheel of Time at the Konark Sun temple has a carving of Narasimha Avatar. A nice pun by the king Narasimha who built this stupendous temple. 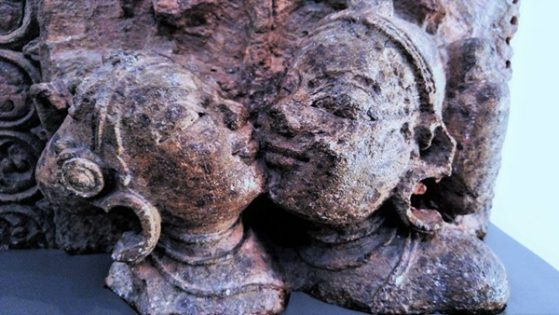 This sculpture is currently housed in Konark Museum. It is originally from the destroyed part of the temple. Note the prefect shape of the large earrings (which have broken off). 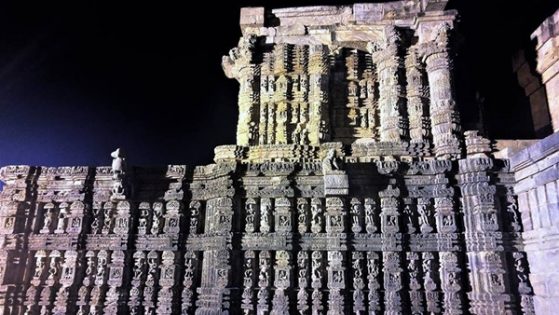 The top row comprises soldiers marching with horses and elephants. The rows below comprise dancers and musicians, with the inlaid carvings in the pillars depicting scenes from daily life. 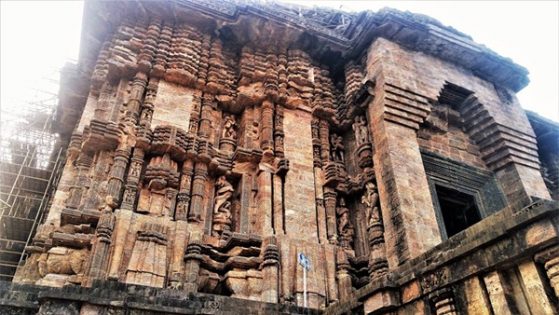 As you can see, some of the carvings have fallen off. Either from natural calamities, or depredations of iconoclasts. Instead of reproducing them with reconstructions, the Archaeological Society of India has left them blank.

Thus what we see of Konark is a pale imitation of its full glory, perhaps 10%. This 127 feet Jagamohana was not the main structure. The main structure was the 227 feet tall Devala behind it which collapsed, ‘very’ probably due to iconoclasm. So on this wall, the carvings in 3 niches have disappeared, and one niche is damaged. Only 4 main carvings exist. Even so, the splendour is undeniable. 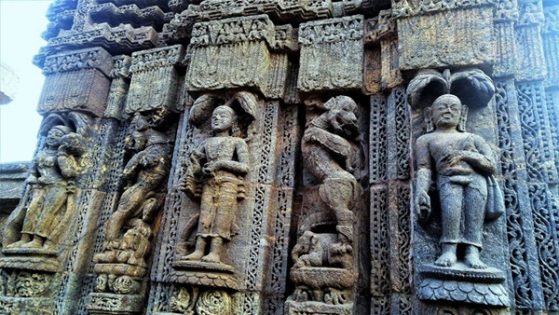 Carving on the dance hall

This carving depicts the 3 characters. A demure damsel carrying water on the left, a rich young man in the middle, and a sage on the right. You can see the Bhumisparsha mudra (hand sign) of the sage.

Note that the three smiles on the three different faces are different. An enchanting smile on the left, a less expressive confident smile in the middle, and for the sage, a far more sublime reserved smile, as if smiling on infinity.

All three carvings have trees in the background. The respect ancient Indians had for the eco-system was incalculable. 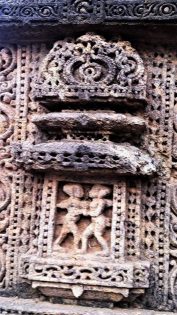 These are two female wrestlers boxing for sport and entertainment. WWE 700 years ago! 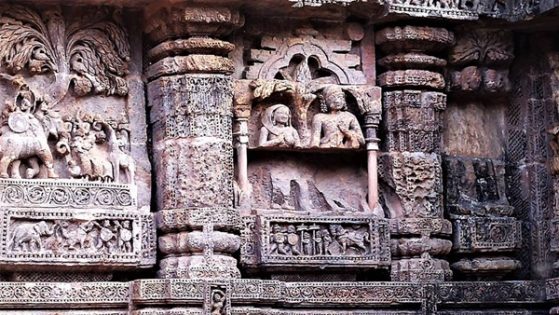 This is a carving on a panel of the temple of the Emperor who built the Konark Sun temple- Narasimhadeva, and his Queen. He was a powerful king who not only defeated the attacks from the Sultans of Bengal, but also sent trade delegations to Africa.

The carving to the left shows the exchange of exotic animals between the kings of Odisha and Africa (elephant and a rather ‘swirl-headed’ giraffe.). 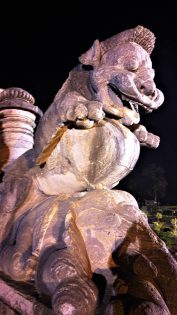 The Lion Guard pounces on an elephant. Inimical indologists (sic) have interpreted this as a sign of Hinduism bragging its overpowering of Buddhism. Yet this can explain too why in may depictions, the lion dominates an elephant who in turn dominates a human. It is more likely a symbolic representation of Rajas overcoming Tamas.

The 2 guards are at the entrance to the temple (east face). This photo was taken at night.

Dev Mukerji is a Lover of Art, Traveler of Life, Proud Husband and Father, and Son of India.

The Balochistan Sphinx Temple Complex: Is It a Man-made Architectural Wonder?