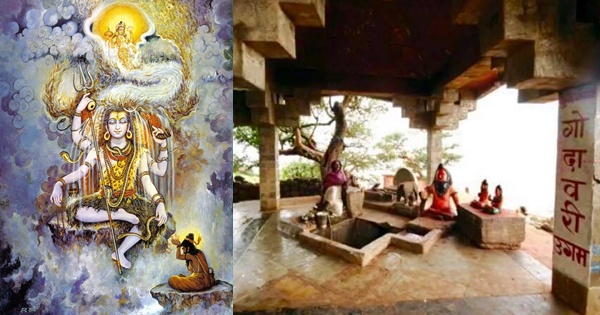 “The enigmatic Brahmagiri mountain stands with its top covered under the monsoon clouds while a supernaturally born river Godavari, rushes down at the foothills of Trimbakeshwar making a nearly 1500 km journey to meet the Bay of Bengal.”

An ancient river which is a gift to mankind, yet, for some unknown reason not much proclaimed. Godavari is the second longest river in India after Ganga. Traveling through many states, supporting countless towns, prospering even more villages, invigorating numerous lives! Godavari flows incessantly through rural Maharashtra, Telangana and Andhra Pradesh until she renounces at the Bay of Bengal. She forms the third largest river basin in the entire Indian subcontinent after river Ganga and the Indus. 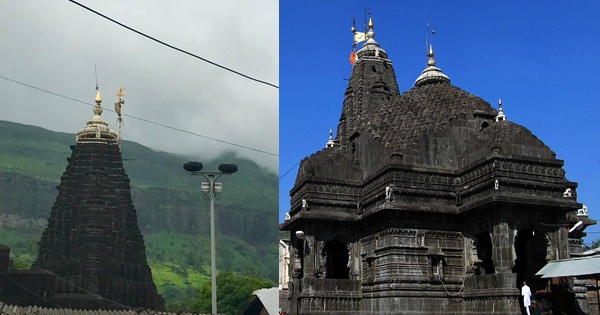 Godavari is sacred and also called the Dakshin Ganga or Southern Ganga. It is said one gets cleansed after taking a holy dip in this sacred river. Lord Rama, Sita and Lakshmana lived for long at the banks of the Godavari river. Baladeva 5000 years ago, Chaitanya Mahaprabhu 500 years ago and now numerous Naga Sadhus and devotees during Kumbh mela – a dip has cleansed them all. Many religious sites got entrenched and are visited for centuries along the river. Few notable places of worship include Trimbakeshwar,  Nashik, Nanded, Paithan, Basar, Bhadrachalam, Dharmapuri, Kaleshwaram and many more.

During the ceaseless fusion between heaven and earth at the top of Brahmagiri mountain, a small but powerful spring originates magically at the Gangadwar (source). Godavari then flows subterranean several times during her short journey from the hills of Bramhagiri to Nashik where she unveils as a complete river. 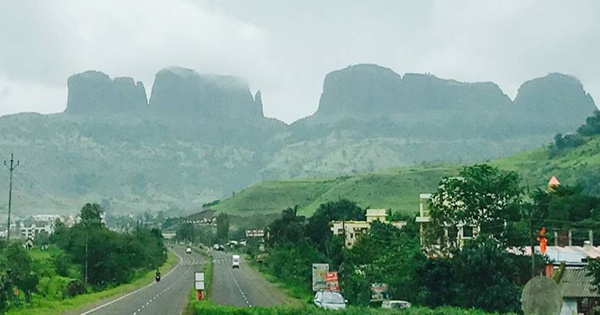 During the process of occasional disappearance and reappearance, she undergoes some mystical transformation which makes her even more sacred. After a brief departure from the surface at the foothills of the Chakra Tirth (Confluence with west flowing stream called Ganga) and again after river Ahilya meets her near Trimbakeshwar temple, she reappears straight into the Inner Sanctum of one of the most revered Shiva Lingam at Trimbakeshwar temple. Here Godavari persistently flows as a spring on the Jyotirlingam, gathering blessings from the trinity (Brahma, Vishnu and Shiva) on behalf of millions of lives who touches her during her long cruise to the delta of the Bay of Bengal. 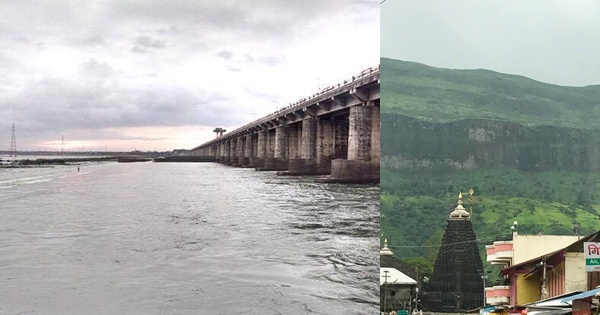 Many centuries ago Rishi Gautam and his wife Ahalya resided near Trimbakeshwar. One day a divine cow called Maya Dhenu got killed accidentally at the ashram premises. A sin of killing a divine cow made Rishi Gautam undergo severe penance. He prayed for atonement and wanted to wash away his sins by water from river Ganga. Lord Shiva was pleased with Rishi Gautam. He turned into a mountain and asked river Ganga to flow on his matted hair. Ganga under the name of Dakshin Ganga or Godavari thus flowed down this mystic mountain, which actually looks like Shiva’s matted hair. Later Brahma meditated near this mountain and Shiva appeared before him and named this mountain after Lord Brahma himself. Thus the name Brahmagiri came into existence.

This may be a myth but the truth is that Godavari could have changed its course and run towards the Arabian Sea which is just 120 km from Trimbakeshwar. Vaitarna river originates from the same source along with Godavari at Bramhagiri but only travels 120 km to join the Arabian Sea. Instead, Godavari traverses relentlessly almost 1500 KM from the west coast to east to meet the Bay of Bengal. 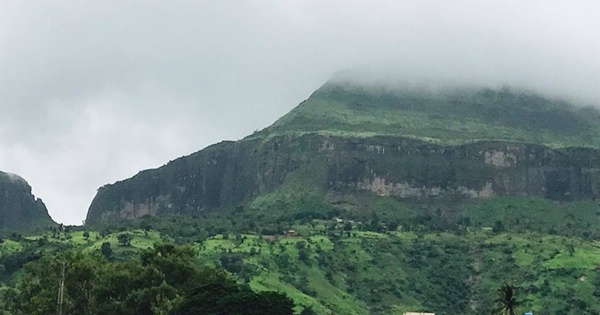 Godavari could have turned into a tributary and connected with another river on her course, instead she became the main stem river while many tributaries united with her at various locations. Tributaries namely Pravara, Indravati, Manair, Purna, Pranahita, Manjira and Sabari continuously flow into Godavari strengthening her at various stages forming the largest basin of the peninsular India.

She could have also gone underground after a short journey like many small rivers or even drained herself to any lake. On the contrary Godavari ceaselessly uplifted the lives of many people along her basin till she meets the eastern sea. Many dams have been built along her journey acting like iron shackles resulting into wellbeing as well as conflicts, irrigation boom as well as ecological sufferings. Some noteworthy dams on the Godavari river and her tributaries are Gangapur Dam, Darna, Karanjwan, Bhandardara, Jaikwadi, Yeldari, Goshikhurd, Isapur, Siddheswar, Vishnupuri barrage, Ghatgar Dam, Sriram Sagar, and Dowleshwaram barrage. 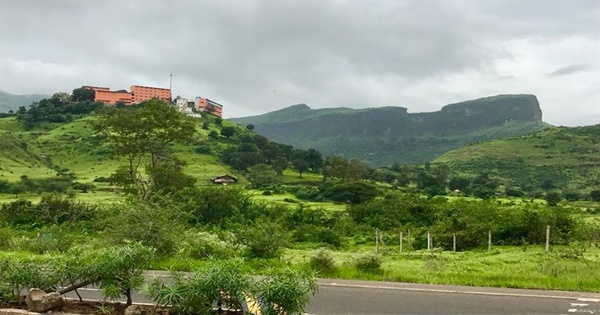 It’s only now, that we look back at our various scriptures including the Vedas and find mention of Godavari as one of the seven sacred rives of India. It’s one of the 12 Pushkaram rivers of India, where a dip can cleanse off all sins. Our ancestors were wiser and understood the importance of this magnificent river long back.

Godavari is remarkable for her magical transformation from a small stream to a very determined river eager to travel across the country to connect with the sea of the eastern shore. She is revered because of her ability to feed and nourish so many lives along its banks, accumulating rich mineral deposits and supporting scores of wild life. Many ancient kingdoms, towns and villages have risen and fallen during the life cycle of river Godavari. Numerous pilgrims, countless devotees, renowned scholars and poets, powerful kings have bowed and prayed along this river course over many centuries. 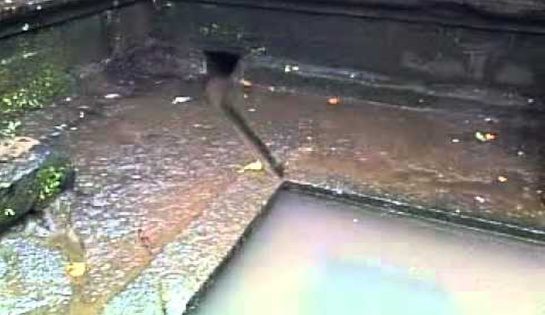 At every stage when magical droplets originates at the top of Bramhagiri mountains and emanates from the Gangadwar, many Yogis across India whisper chants in the name of Lord Shiva. Every time when this tiny stream emerges inside the Sanctum of Trimbakeshwar Lingam, devotees constantly chant and invoke the Lord Shiva. Godavari fostered countless lives through centuries and will continue to do so for many more centuries, as she is blessed by the Gods, directly.

She relentlessly nurtures mankind while we in return ceaselessly pollute her, sometimes even critically with industrial effluents, agricultural wastes, fertiliser runoff, sewage, ash dumps. May be one day people living in this river basin will pay back to their beloved river by elevating their cognizance level. Till then we must applaud and respect this glorious river called Godavari. 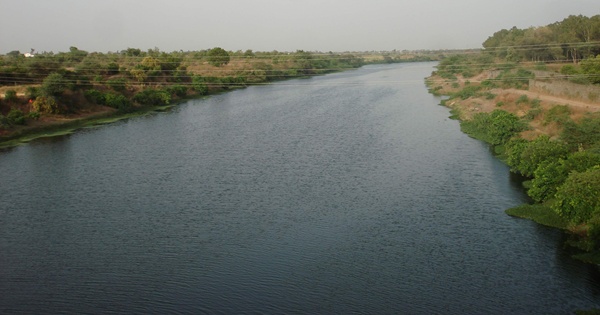