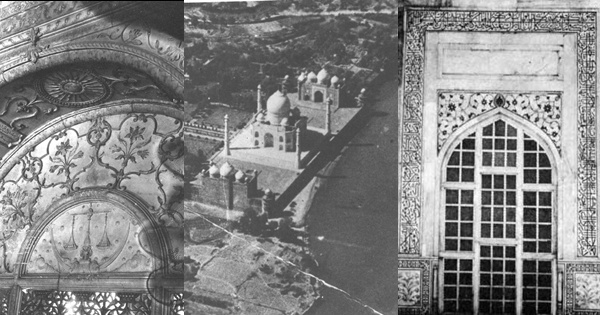 The controversy surrounding Taj Mahal isn’t yet solved though there have been numerous proofs to justify that it was a Hindu structure, or to be specific a Shiva temple. Evidences have been hidden by the so called modern historians who followed their masters for petty positions and power. Even documents left behind by the Mughals such as Badshahnama (by Abdul Hamid Lahori, a traveller and historian during the period of Shah Jahan who later became his court historian) validate this point. Many of their own historians praised their own conquests and murders of innocent Hindus!

Shri P.N. Oak, an ex-soldier of Netaji Subhash Chandra Bose’s INA, had presented many evidences which was rejected by so called historians as they could not allow such truth to be published.

Viswakarma Vastushastra, a Vedic treatise on architecture finds mention of ‘Tej Linga’ amongst Shiva Lingas. The Taj Mahal is a corrupt form of the Sanskrit term ‘Tejo Mahalaya’ signifying a Shiva temple.  Many researchers consider Tej Linga to be the Shivalinga in the Tejo Mahalaya temple. Scholars also name the shrine as Naganatheshwar as its parapet is girdled with Nagas, i.e. cobra figures.

Besides the many evidences, the following data suggests that Taj Mahal is a Hindu structure, a Shiva temple:

A Sanskrit inscription supports the claim that the Taj Mahal was originally a Shiva temple. Wrongly termed as the Bateshwar inscription (currently preserved on the top floor of the Lucknow museum), it refers to the raising of a “crystal white Shiva temple so alluring that Lord Shiva once enshrined in it decided never to return to Mount Kailash, his usual abode”.

That inscription dated 1155 A.D. was removed from the Taj Mahal garden at Shah Jahan’s orders. Historians and archaeologists have blundered in terming the inscription as Bateshwar inscription when the record doesn’t say that it was found at Bateshwar. It ought, in fact, to be called The Tejo Mahalaya inscription because it was originally installed in the Taj garden before it was uprooted and cast away at Shah Jahan’s command.

A clue to the tampering by Shah Jahan is found on pages 216-217, vol. 4, of Archaeological Survey of India Reports (published 1874) stating that a “great square black ballistic pillar which, with the base and capital of another pillar….now in the grounds of Agra, …it is well known, once stood in the garden of Taj Mahal”.

A wooden piece from the riverside doorway of the Taj subjected to the carbon 14 test by an American Laboratory and initiated by Professors at Pratt School of Architecture, New York, has revealed that door to be 300 years older than Shah Jahan. The doors of the Taj, broken open by Muslim invaders repeatedly from the 11th century onwards, had to be replaced from time to time. The Taj edifice is much more older. It belongs to 1155 A.D, i.e., almost 500 years anterior to Shah Jahan.

The Taj Mahal is scrawled over with 14 chapters of the Koran but nowhere is there even the slightest or the remotest allusion of Islamic overwriting to Shah Jahan’s authorship of the Taj. Had Shah Jahan been the builder he would have said so in so many words before beginning to quote Koran.

That Shah Jahan, far from building the marble Taj, only disfigured it with black lettering is mentioned by the inscriber Amanat Khan Shirazi himself in an inscription on the building. A close scrutiny of the Koranic lettering reveals that they are grafts patched up with bits of variegated stone on an ancient Shiva temple.

Besides, according to PN Oak, there are hundreds of architectural evidences that prove that Taj Mahal is actually a Hindu monument.  To quote him, “Well known Western authorities on architechture like E.B.Havell, Mrs.Kenoyer and Sir W.W.Hunterhave gone on record to say that the TajMahal is built in the Hindu temple style. Havell points out the ground plan of the ancient Hindu Chandi Seva Temple in Java is identical with that of the Taj.”

The central dome with cupolas at its four corners is a universal feature of Hindu temples. The four marble pillars at the plinth corners are of the Hindu style. They are used as lamp towers during night and watch towers during the day. Such towers serve to demarcate the holy precincts. Hindu wedding altars and the altar set up for God Satyanarayan worship have pillars raised at the four corners.

The octagonal shape of the Taj Mahal has a special Hindu significance because Hindus alone have special names for the eight directions, and celestial guards assigned to them. The pinnacle points to the heaven while the foundation signifies to the nether world. Hindu forts, cities, palaces and temples generally have an octagonal layout or some octagonal features so that together with the pinnacle and the foundation they cover all the ten directions in which the king or God holds sway, according to Hindu belief.

What does the trident pinncle over the dome of the Taj Mahal prove? A full scale of the trident pinnacle is inlaid in the red stone courtyard to the east of the Taj. The central shaft of the trident depicts a “Kalash” (sacred pot) holding two bent mango leaves and a coconut. This is a sacred Hindu motif. Identical pinnacles have been seen over Hindu and Buddhist temples in the Himalayan region. Tridents are also depicted against a red lotus background at the apex of the stately marble arched entrances on all four sides of the Taj. People fondly but mistakenly believed all these centuries that the Taj pinnacle depicts a Islamic cresent and star was a lighting conductor installed by the British rulers in India. Contrarily, the pinnacle is a marvel of Hindu metallurgy since the pinnacle made of non rusting alloy, is also perhaps a lightning deflector. That the pinnacle of the replica is drawn in the eastern courtyard is significant because the east is of special importance to the Hindus, as the direction in which the sun rises. The pinnacle on the dome has the word `Allah’ on it after capture. The pinnacle figure on the ground does not have the word Allah.