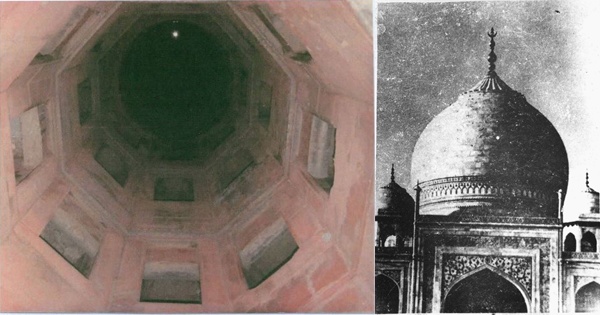 Tejo Mahalaya falsely called Tajmahal has been proved to be a Hindu monument like thousands dotting the country side made by Hindu kings, falsely usurped by Mughal kings in their name. To prevent the Hindu takeover these were turned into mausoleums by burying themselves and their progenies so that Hindus would not be able to establish their places of worship again as it would be contaminated with their graves! Shri P.N. Oak an ex-soldier of Netaji Subhash Chandra Bose’s INA had presented many evidences, which were rejected by so called historians as they could not allow such truth to be published.

Besides many evidences, the treasury well, dome, and the 22 rooms of the Tajmahal prove that it was Shiva temple Tejo Mahalaya

Between the so-called mosque and the drum house is a multistoried octagonal well with a flight of stairs reaching down to the water level. This is a traditional treasury well in Hindu temple palaces. Treasure chests used to be kept in the lower apartments while treasury personnel had their offices in the upper chambers. The circular stairs made it difficult for intruders to reach down to the treasury or to escape with it undetected or unpursued. In case the premises had to be surrendered to a besieging enemy the treasure could be pushed into the well to remain hidden from the conqueror and remain safe for salvaging if the place was reconquered. Such an elaborate multistoried well is superflous for a mere mausoleum. Such a grand, gigantic well is unnecessary for a tomb.

The Tajmahal has a reverberating dome. Such a dome is an absurdity for a tomb which must ensure peace and silence. Contrarily reverberating domes are a necessity in Hindu temples because they create an ecstatic din multiplying and magnifying the sound of bells, drums and pipes accompanying the worship of Hindu deities.

The Tajmahal dome bears a lotus cap. Original Islamic domes have a bald top as is exemplified by the Pakistan Embassy in

The entrance of the Tajmahal faces south. Had the Taj been an Islamic building it should have faced the west.

The Taj is a seven storied building. Aurangzeb also mentions this in his letter to Shahjahan. The marble edifice comprises four stories including the lone, tall circular hall inside the top, and the lone chamber in the basement. In between are two floors each containing 12 to 15 palatial rooms. Below the marble plinth reaching down to the river at the rear are two more stories in red stone. They may be seen from the river bank. The seventh storey must be below the ground (river) level since every ancient Hindu building had a subterranean storey.

Immediately below the marble plinth on the river flank are 22 rooms in red stone with their ventilators all walled up by Shahjahan. Those rooms, made uninhabitable by Shahjahan, are kept locked by Archaeology Department of India. The lay visitor is kept in the dark about them. Those 22 rooms still bear ancient Hindu paint on their walls and ceilings. On their side is a nearly 33 feet long corridor. There are two door frames one at either end ofthe corridor. But those doors are intriguingly sealed with brick and lime.

Apparently those doorways originally sealed by Shahjahan have been since unsealed and again walled up several times. In 1934 a resident of Delhi took a peep inside from an opening in the upper part of the doorway. To his dismay he saw huge hall inside. It contained many statues huddled around a central beheaded image of Lord Shiva. It could be that, in there, are Sanskrit inscriptions too. All the seven stories of the Tajmahal need to be unsealed and scoured to ascertain what evidence they may be hiding in the form of Hindu images, Sanskrit inscriptions, scriptures, coins and utensils.

Apart from Hindu images hidden in the sealed stories it is also learnt that Hindu images are also stored in the massive walls of the Tajmahal. Between 1959 and 1962 when Mr. S.R. Rao was the Archaeological Superintendent in Agra, he happened to notice a deep and wide crack in the wall of the central octagonal chamber of the Taj. When a part of the wall was dismantled to study the crack, out popped two or three marble images. The matter was hushed up and the images were reburied where they had been embedded at Shahjahan’s behest. Confirmation of this has been obtained from several sources.