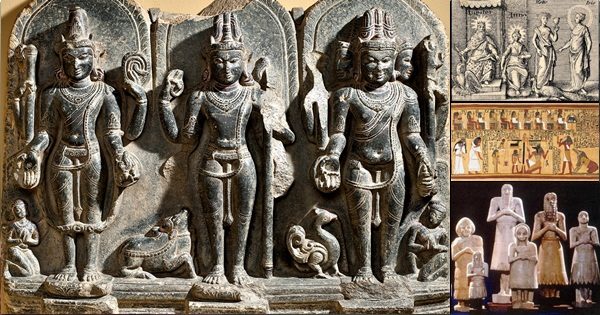 We now see an awakening of consciousness among Bharatiyas after the 70 years of slumber post independence.

A lot many writers and intellectuals are now talking about Sanatana Dharma and how it is different from Abrahamism. The religions limited to one single book to read all their lifetime, naturally develops a myopic view about divinity and the reality of the world, in contrast to the Dharmic traditions having the knowledge and diversity of views captured into the equivalent of not just one but several libraries of books! Those who are naturally ignorant, resort to violence, threat and intimidation to compensate for their lack of knowledge. A small droplet of knowledge, that too grossly distorted, that they got in a single book in a single verse, they shamelessly broadcast loudly, many times a day, to a 100 crore population that has inherited an ocean of knowledge, amassed through their civilization running into many thousand years!!

The best part is, this difference is now recognized even by the fence sitters, immersed in the Tamas of inaction and passivism. Those who remain silent thinking that Sanatana Dharma will take care of itself, because it is eternal (Sanatana) are recognizing that its continuity in this little planet Dhara need their own active involvement too, because Dharmo Rakshati Rakshitah, Dharma protects those who protects Dharma. Dharma operates through the individual consciousness. Dharma strengthens in a civilization of sentient beings through its collective consciousness. If a generation of sentient beings in a planet like Dhara forget Dharma, it will cease to exist in that planet, but will continues to exist in the Universe amongst the other sentient beings in the millions of other planets. That is the true meaning of Sanatana Dharma.

The world suffers not much because of the violence of violent people but because of the silence of the good and wise people. The attitude that, as long as the violence is not happening to me, so I will remain inert will cause much harm to all of us. Whatever violence happens to another, it is also felt by all of us because our minds are connected in consciousness.

There are others who can sense adharma happening all around but they are of the opinion that it will be taken care of by an Avatara who will be born after the end of Kali Yuga! Or they will leave it to a few intellectuals and thinkers of their current lifetime. They should know that the true meaning of Avatara is the descend of the higher consciousness into the individual minds. By tuning the mind into the exalted consciousness, this Avatara (descend) of higher consciousness occur in anybody’s mind, enabling one to help others to ascend (uddhaara) in consciousness. This is a process similar to raining and evaporation.

Those who still think that the adharmis are more powerful and more organized than those who follow Dharma, those who are still brainwashed by the lie that adharma and dharma are equal (vz. all religions are equal), those who think that adharma is better than Dharma and those who actively work for the spread of adharma by distributing pamphlets, by pretending love to cheat women, by offering rice, money, jobs and positions to convert the Dharmic people into adharmis, all of these people are having deeper and deeper shades of Tamas.

All of these ancient traditions where proto Dharmic traditions, exhibiting some partial qualities of Sanatana Dharma at its various stages of evolution, like respect to women, to motherhood, to elders, the worship of ancestors, natural forces and mano-gocharas (divinities beyond our reality who reveal to the meditating mind) as para devatas, rich cultural vibrancy, pilgrimage, holy places, shrines, diversity, non dogmatism, non exclusivity, open mindedness, inner enquiry (meditation, dhyana), healthy or divine understanding of sexuality as the source of creation and as the means of consciousness ascend, etc.

The current strain of exclusive monotheism emerged in Egypt. It destroyed the Egyptian civilization first, viz. its host culture , and then the Canaanite culture (its mother culture), then the Greek, Roman, Germanic, Celtic and Nordic cultures of Europe. Then it went to the Americas and destroyed the civilizations like the Mayan, Inca and the Acteks. In Oceania it destroyed the Moari civilization and many native African cultures in Africa. The Arabian version of Abrahamic monotheism created a second wave of destruction. It first destroyed its own parent culture of Arabia. Then it destroyed the Akkadian, Sumerian, Zoroastrian cultures in Iraq, Iran and also the Buddhist, Hindu cultures in Afghanistan, Central Asia, Tibet and Xingiang. Abrahamic Atheism (like Commuism, Marxism etc) arose from Abrahamism itself to finish of what is left off in the world like the ancient traditions in China and some SE Asian countries.

A proper in depth study of these proto Dharmic ancient polytheist cultures is missing in the Dharmic discourse. Formerly individuals like Sitaram Goel has studied it but others did not pick it up to expand this scholarship further.

Such studies will give tremendous insights on how Abrahamism operate in destroying, uprooting or absorbing with distortions of great cultures. Studying it will help remove the Tamas and delusion of the Dharmic people by recognizing clearly that the same old tactics are used to destroy the Dharmic traditions in Bharata today, viz the vilification of the target tradition, the creating of a sense of shame about ones own culture and finally preparing the people to accept their own destruction. A small percentage of intellectuals in the target culture will see through this massive but subtle brainwashing and propaganda. These people will then be targeted for further vilification so that their own followers will detest them. Once these last impediment is cleared, then the target culture is easily converted in 100 or less years! This is how all the 40 or 50 ancient cultures are destroyed.

As the surviving ancient tradition with 100 crore members, we have a Dharmic duty to ask questions about what happened to those kins, those proto Dharmic cultures in Europe, Asia, Africa, Americas and Oceania. They cannot be brought back exactly like it were before, but their modern versions will be better substitutes for the monopoly of Abrahamic monotheism devoid of any true substance.

Along with bringing Sanatana Dharma to the whole world, this is another project the Dharmic intellectuals need to focus in 21st century, bringing justice to the billions of ancestors of the ancient proto Dharmic polytheist cultures of the seven continents who suffered greatest violence and atrocities committed by the exclusive monotheist aggressors.

Only then the sloka recited at the beginning can be recited with pride.