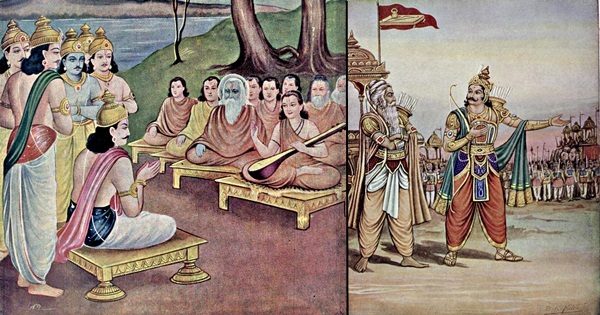 Dharma certainly has a political arm and much more invested in politics than Abrahamic theology. It is grossly wrong to say it is not.

That is why kings in ancient India ad a kula Guru to advise them. Vasistha for Rama, Vyasa and Dhaumya for the Pandavas and so on. Every aspect of politics executed by the Rajas and his Kshatriya administration were decided, monitored or approved by Dharma gurus like Bhrgu, Angiras, Gautama, Bharadwaja, Vasistha, Agastya, Pulastya, Pulaha, Dhaumya, Ghrtsamada, Vishvamitra and so on.

Today’s Gurus just reduce themselves to spirituality. It is an aberration of modern times than the norm.

Except Sri Yogi Adityanath and to some extent Sri Ramdev, Sri Paripurnananda of AP,  Sri Chidanandapuri of Kerala, Sri Sadguru to some extent (but with flip flops on communism), I don’t see any other Gurus doing their job properly in the area of politics. None in military or in science, technology etc.

Today when Dharma has to deal with non Dharmic systems the Gurus must invest even further into politics, military, defense, science, inventions and technology like how Bhargavarama, Bhardwaja, Vyasa and others did in ancient India rather than hiding behind spirituality and serving secularism slogans.

That Hindu Gurus should shy away from non spiritual domains like politics is an idea planted by the AbrahamoLeft ecosystem only since some 70 years ago . This was the Step 2 of preparing Dharmic Bharatiyas for mass slaughter and extermination like they did with other polytheistic cultures in Greece and Rome. It was the same ditto strategy of pagan hunting that was done all over the world in the last 2000 years.

The Step 1 happened with the arrival of MK Gandhi, in the last century viz. planting the idea of pacifism and prostrating defenseless (calling it Ahimsa, which it is not) in front of the attacking enemy.

Sadhu Sanyasis and their kalaris and akharas, as late as 1910s were very active in weaponry, defenses, fights and military. All our devatas like Durga, Shiva and heroes like Rama, Krishna, Arjuna, Bhima are ayudha dharis, heavily armed.

Angirasa-Bharadwaja lineage of Rishis were technologists who produced many yantras, chemicals, weapons etc. So was Bhrigu, the inventor of fire and all technologies using fire. This also includes shataghni, an ancient killer of 100 soldiers using arrows or molten metal balls shot triggered using fire. It is the ancient ancestor of tanks and catapults.

In contrast, the Abrahamic priests, though in medieval ages were scientist-killers, later realized their mistake of their ignoring of science, and invested heavily in learning mathematics, science, technology and inventions. The Jesuit missionaries facilitated the transfer of mathematical knowledge from Kerala Brahmanas into Europe and facilitated the Neutonian calculus leading to all discoveries of Newton. Mughal and early invaders studied Indian science and mathematics and spread some of it into Europe.

But surprisingly the investment and interest of Dharma Gurus and sanyasis into inventions, science, technology military, defense and politics declined and they reduced to mere spiritual gurus who shy away from politics, science and technology.