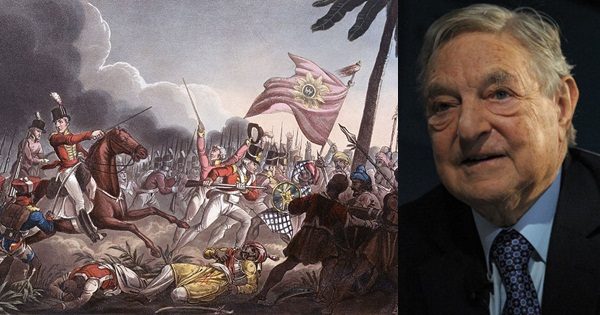 The Eclipse effect:-A rare opportunity to glimpse the evil dark shadow government, the selfish keepers of the current world order

This was exactly the language used by 19th century European thinkers to justify colonisation.

John Stuart Mill is much celebrated as a “liberal” but he worked for the East India Company and actively justified colonization as deliverance from “Oriental despotism” and as a civilising mission.

In his book Consideration on Representative Government, Mill states that Britain did not benefit from colonising the world but must do it in the interest of world peace!!

Same pattern now repeated by George Soros. This means it is time to be more watchful.”

There is a part of the world which had controlled the world wide global narratives and even local narratives in the countries like India. All humans lived as near total slaves blindly believing in these tightly controlled narratives which are closely built on huge LIES that lives undestroyed for decades, centuries and some times even millennia.

This include Abrahamism and their monotheism and lies surrounding it which control 3 to 4 billion people, more than half of the world population. These ideologies lasted for centuries and millennium and controlled people like zombies or as robots. The controllers of these authoritarian ideologies can organize large number of people to do any organized crime, like murders, genocides, destruction of property and even the destruction and breaking up of countries. These ideologies also include Communism, Feminism etc which are decades long authoritarian ideological control systems, capable of mass maneuvering of large masses of people to evil causes by suspending their thinking capability and decision making capability.

Together these authoritarian, dictatorship based ideologies (Abrahamism as the big beast and Communism etc its small companion wolfs and hyenas) can be unleashed upon targets.

Their primary target is/ was / will be liberal, multi ethinic, polytheist civilizations like the ancient Greek, Roman, Mayan, Egyptian, Mesopotamian, Arabian, Chinese and Bharatiya civilization. The reason why they target these naturally grown gentle systems is that such societies offer great individual freedom. People work for individual upliftment or self liberation like Yoga, Dhyana Moksha etc or for the collective good like generating elevating literature and philosophy like :- Veda, Itihasa, Puranas, Upanishads, etc (especially at the peak of their consciousness elevation, like happened in Bharatiya Dharmic civilization in Bharatavarsha).

They target such civilizations because, such liberal societies free the individual and societies which cannot be manipulated and exploited by controlling them like a pack of ants or as honeybees. They are thorns in the evil world order that wants to enslave humanity for the benefit of a few (like George Soros) who control this world order.

Specifically in the last 3 or 2 decades an unexpected development, never seen for thousands of years occurred. The advent of internet and social media that largely disrupted the near total information control that the evil masters of the world (like George Soros) had.

An individual, however busy, can now use social media to reveal all the truth and expose the lies that outlived centuries and millennia !

This was a nightmare and we have seen attempts to curtail social media and internet from as early as 2005 and 2010 where world’s rich men and world leaders congregate on some posh location and pass resolutions to curtail social media freedom of free expression. Some of it are visible and some others are invisible like the well perceived biases noticeable in SM since 2015 to 2020, like shadow banning, fb jails, twitter blockades, suspension of accounts, leaking of account details as if it is an accident, reporting for hate speach, death threats, real murder and so on.

This shadow world masters were capable of destroying all polytheist traditions of the world except Sanatana Dharma, (which is instantiated in Bharata popularly known as Hinduism). But they are shocked as their narrative control is being lost to individual social media contributors of free speech and un adulterated truth.

This is the culmination of information warfare going on for 2000 or more years that will be happening in this decade of 2020s.

Look at the anti CAA protest and announcements of people like George Soros in this light.

Great pain, much loss ahead. But there is good out there. Have trust. We oppose deception.