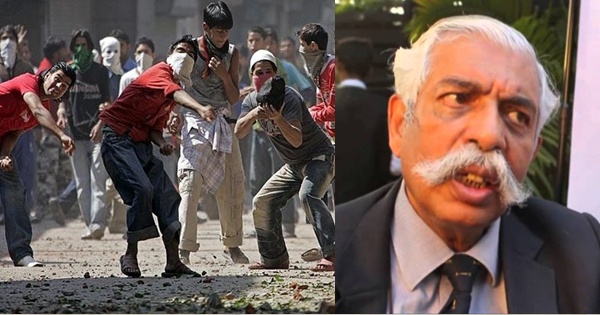 Stone pelters! This phrase is no new coinage. Behind the unrest in the Kashmir valley are terrorists. Who has been dealing with terrorists all these years? The Indian Army! BSF jawans! CRPF! Border police! J&K police! But, while dealing with terrorists, they pay a heavy price. They sacrifice their lives. They get injured. There is nothing new about injury through stone pelting. And the same story continues unabated.

Dailymail.co.uk carried a news item (India Today TV report) with the following headlines on stone pelters – ‘This is our bread and butter’: Undercover reporters film Kashmiri ‘stone-pelters’ admit to being paid Rs 7,000 a month for throwing stones and Molotovs at Indian forces. As per the report, “Zakir Ahmad Bhat, Farooq Ahmad Lone, Wasim Ahmed Khan, Mushtaq Veeri and Ibrahim Khan made startling confessions: from being on the payroll of their underground masters to carrying out deadly attacks on security forces, public servants and property in the troubled region.”

The report further quoted thus, ‘It’s Rs 5,000-Rs 7,000 (£80) a month and clothes. Sometimes shoes as well,’ said Bhat when asked whether he was paid to charge at security forces with stones.” The stone pelters did not reveal the names of their financiers. They said, as quoted in the report by dailymail.co.uk – ‘will die but won’t reveal their names. It’s the question of our bread and butter.’

For stone pelter Lone, his daily income from organising shutdowns and stone-throwing demonstrations ranged from  Rs 1,000 to Rs 5,000. For Wasim Ahmed Khan, it was Rs. 5000 to 6000; he admitted of pelting stones since 2008. Ten long years! For Veeri, it was ‘Rs 700 a day on weekdays and up to Rs 1,000 on holy Fridays’. Even young children were also recruited as pelters and they were paid around Rs 7,000 – Rs 7,500. What would be the future of the state when such a situation prevails? Enforcement of the rule of law is the need of the hour to deal with stone pelters.

Rs 5000 to Rs 7000 a month! Why are strict actions not taken against the stone pelters? According to Maj Gen GD Bakshi, there are around 40,000 stone pelters in Jammu and Kashmir. And they get paid to pelt the lethal weapons at the Jawans. As per GD Bakshi, 20,000 of the stone pelters were arrested, but later freed by Mehbooba Mufti. CM Mufti described the withdrawal of cases against the stone pelters as a ray of hope for the young boys and their families. She termed it ‘an opportunity to rebuild their lives’. Ironically, soon after their release, they killed one Army Jawan and wounded many by pelting stones! 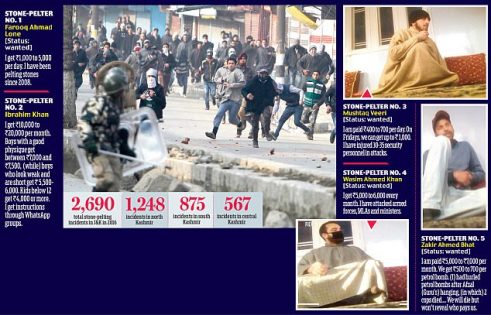 There has been many incidents of stone pelting on security forces in J&K. But it is the stone pelters who get all the sympathy. On the issue of stone pelting, Maj General GD Bakshi said, “Why should we not enforce the rule of law in J&K? Why are some obnoxious killers being treated with kid gloves? When there were riots in Sirsa Dera Sacha Sauda case, the Police opened fire and killed 36 people in a single day. Please tell me why the same could not be done in J&K against murderous stone pelting Mobs. Why did we confine ourselves to pellet guns and water cannons? Are the Kashmiri trouble makers above the law of the land?”

“We cannot permit some separatists to interfere with the legitimate counter terrorist operations of the Security Forces. And we cannot accept the state’s authority being flouted so brazenly- just exploiting the softness of the Indian state.”

According to Maj Gen GD Bakshi, in between the year 2000 to 2005, when he was posted in J&K, there were over 4000 armed terrorists in Jammu and Kashmir. Today, this number has been brought down to 250 by the Army. He says, “During those times, Pakistan used to send more terrorists against the number of deaths. In 2003, we started building fence and it was completed by 2005. Infiltration decreased by 70% to 80% as a result of the security measures.”

“By 2008 the Pakistamis realized they had lost the armed phase of terror. So they switched to The INTIFADA phase on the Palestinian model. Today the MAIN FOOT SOLDIERS of JIHAD are not so much armed terrorists but STONE PELTERs – some 40,000 mostly paid by ISI. They mount lethal attacks with stones and then pose as victims before the world press. Peaceful protest is fine but stone pelting is NOT a peaceful protest. It is a lethal attack and demands a firm response.”

Here is the full video on what GD Bakshi says about the stone pelters menace in Jammu and Kashmir.

Maj Gen GD Bakshi further said, “The Moment an encounter starts in J&K, these terror supporters start texting on mobiles and assemble huge crowds to help terrorists escape by attacking the troops from the rear with lethal stone attacks. How long is the Indian state supposed to take this violence lying down? So sadly we were forced to respond at Pulwama and 7 civilians were killed because they chose to attack our soldiers with sticks, stones and molotov cocktails. This will not pass any longer. The state will have to uphold the law.”

Past stone pelting incidents have been witness to majority of the media sympathizing with the stone pelters! They even visited them in hospitals and created news, disseminating info about their cause on their behalf! And where the secularism mass, presstitudes, and anti-India hooligans try to bring the nation under their sway, turning the situation chaotic, it is time the nation awakes against such anti-India promoters and supporters.

According to a report, Pakistan has been provoking the youth and children in the valley to resort to stone pelting. Pakistan has even resorted to using social media platforms to provoke Kashmiri youth groups to pelt stones at security forces, notifying them beforehand whenever any encounter is to take place at a particular location between security forces and terrorists.

The Indian Security Forces are our protectors at the border. We, the protected, lead the carefree life according to our whims and caprices. While they sacrifice their lives for us, we act as silent spectators. While they put their lives at stake defending us against Naxalites and terrorists, we enjoy our freedom amid friends and families. Is the media’s gesture sympathizing with the stone pelters justified?