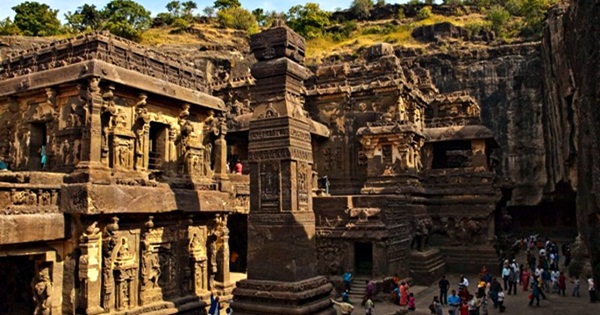 Another eminent speaker talked about the emerging soft power of India by connecting to achievements dating back to Yoga, Sanskrit and Vedas and India being called the ‘Vishvaguru’.

What came across to me from them was that since the last one thousand years were characterized by invasions and killings, they don’t leave anything for Indians to be proud of and they must exclude it from their identity.

Some of the audience sitting next to me sighed, “He is right. We have nothing to look back to those years and must look ahead and not remember the past.” One of them said, “Why is it not happening?” I saw the audience. There was a gloom in the air.

The message in both the talks was that the soft power of India dates back only to the achievements of the ancient period and those within the last thousand years be seen as a cancer to be excluded from our consciousness.

When I came back home, I saw a program on television on soft power. Arnab Goswami was asking Sadhguru ji and Mr. David Frawley what is stopping India from developing wings and taking a surge in the future. They couldn’t answer that part but only said it will happen. There was a silent understanding that something was missing.

It goes without saying it is on every Indians’ mind that why is our society not taking that leap into the future? What is it holding us back? The answer, I believe, lies in understanding our own past and learning a lesson about healing and inspiration.

If we don’t have anything to feel proud of, do we put a lid over our memory over this period? Do we look at it with silence and denial?

Are we unknowingly implying that there is nothing of value that we can cherish? That our ancestors who lived during that period left nothing for us and are better forgotten? Do we tell ourselves and our future generations that they keep this period as a blank slate?

Is it possible that our ancestors belonging to this period have left for us ‘a gift’, a legacy that we haven’t explored yet? I believe that as a psychologist it maybe is a pointer in that direction.

I had once asked a Jewish psychologist how did he and the Jewish society remember the memory of holocaust history and the generations who went through it. His answer was “We remember them with gratitude and reverence. We see them as our inspiration.”

“Gratitude?” I had felt puzzled. “Even towards those who walked silently to be slaughtered? I thought you as a race would be ashamed of the ancestors who couldn’t offer any resistance?”

“No, we don’t and our historians and scholars have taught us that. We don’t see them as cowards or losers. Our scholars have pointed out they taught us the values that if learnt will transform our society forever. Even though they perished in gas chambers, were tortured for their beliefs and for the rest of the world are nothing but losers, we use their stories as an inspiration to what we should stand for when facing adversity. They teach us why our identity and freedom are interlinked. We, therefore, remember our worst periods and our ancestors with empathy. We realize that after the holocaust, the shame was there but we didn’t let it become binding. Our scholars, historians urged us to discuss it in every forum. They told our society to break the wall of silence that some people were trying to build. The younger generations told the elders that they won’t judge and wanted to know the truth of what happened and assured they will forgive. They told them that they wanted to understand their own history, even the darkest parts and not criticize or condemn. When our society did that we healed and realized that it was our perpetrators who needed to be put in the dock, not us.”

“It may surprise you,” he had said, “the strength of the Jewish nation doesn’t come from the denial of our history but from sublimation, from learning from it. The suffering of our ancestors acts as a warning that it should never happen again. That has truly helped us to build a unique Jewish identity.”

Sublimation is where a group, a society converts its grief into creativity. The deepest works of art, science and literature in the history of mankind have come out of this process.

I had once heard Cornel West, a scholar of Black history tell the audience that the Blacks of his generation remember their ancestors’ slavery not with shame but with empathy and he urged fellow Blacks to teach the same to their children.

“Is this a religious value?” someone had asked.

“No,” he had said. “If only we see the dark part of the Black history without understanding, forgiveness and pride, will we be ever able to transcend that within ourselves,” he had added.

I had visited Robben island, the place where Nelson Mandela was incarcerated for twenty seven years and we were being shown around by the guide, an ex-inmate who knew him. He repeatedly used the word ‘forgiveness’.

“What does it mean to you?” I had asked.

“We take the meaning similar to your Hindu concept of meaning ‘to let go’ because it means we are part of a universal brotherhood. This is also similar to the meaning of the African philosophy ‘Ubuntu’.” He had smiled and said, “We used to discuss the two during the time we broke stones in the quarry.”

Our ancestors too in the last one thousand years struggled and resisted oppression and cruelty of every kind known to man. They showed a resilience that is yet to find a place in our text books in schools and colleges.

So, what is the reason we don’t take any pride in our ancestors who too faced murderous armies and lost or were tortured and killed for their faith and couldn’t protect themselves? When we think of them why do we think of them as losers and feel a disconnect? Why don’t we think of them with empathy as those who didn’t succumb? Will this very memory not heal us and show us the power of regeneration?

I remember Emperor Lalitaditya and Prithiviraj Chauhan with pride. I wish every child would learn of the conquests of Bappa Rawal, Rani Laxmi Bai and Rani Chennamma. I feel a peace when I think of Guru Teg Bahadur’ sacrifice to preserve my faith.

I am proud of my past despite knowing that my ancestors suffered defeat. I am proud because in the midst of annihilation they saved our civilization, our culture and left us with an identity that didn’t die. I wonder why our history is not written as where we constantly fought against oppression and never gave up. Isn’t that our identity today? Should our future generations not learn that we are ‘Survivors’ first?

Can those of us who talk of ‘ek hazaar saal ki gulami’ (one thousand years of slavery) in every sentence, with every breath and remind us of a victimhood whose time is over now stop and pause? Will they understand the damage they are causing by driving it deep in our consciousness?

Jews don’t use it, Blacks don’t use it, no society that has been persecuted in history uses it now so then why should we play victimhood? Can we say to everyone including our thought leaders, our gurus and our leaders that we don’t want it thrust on us anymore?

Being ‘Survivors’ is as real an identity as it can be. It is the pride of the survivor that is supreme and takes him higher and higher. The Hindus have suffered on an unimaginable scale in history and I believe our rise will also be as spectacular.

I wish our thought leaders, our gurus, our intellectuals instill this pride. I wish they just don’t harp on the greatness that our civilization was long ago but focus on how we resisted and fought too. If we don’t we are in the danger of identifying ourselves as losers. Our identity that we can bring out from the darkest periods of our history will become our true healing journey.

Survivor societies have a spiritual energy that is not hard to see. We need to discover it and feel it in our blood. Our ancestors had it too otherwise they couldn’t not have resisted with equanimity and courage. That should be our ‘civilizational gift’ to the coming generations, the power of dharma and Atma gyan that the dharmic forces instilled in us.

Recently, a professor at a party knowing I am psychologist told me, “I am not surprised we as a race never take off. It is shameful we were slaves for centuries and haven’t learnt our lessons yet.” I asked him if he thinks we need to learn the hardships that our own people faced and struggled with and never gave up fighting valiantly. He looked shocked saying, “When did we ever learn to fight and what was the result?”

Will we continue to criticize ourselves and downgrade our own ancestors and our civilizational values? Do we not need to teach our children to feel proud about the last one thousand years and tell them that dharmic forces whose continuity could never be broken have brought us here today and need to be known and preserved? I believe that is how the soul of India will live.