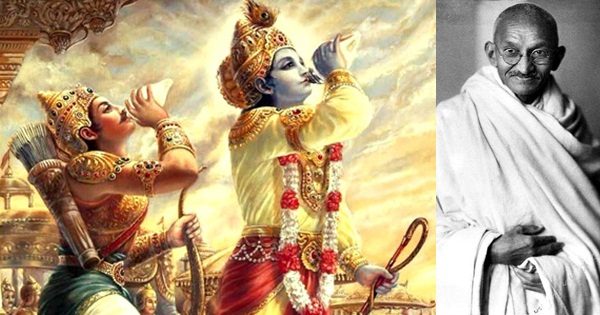 As the Bharatiya civilization passed through various challenges like Islamic invasions starting since 8th century followed by European invasion, and finally freedom struggles through the violent  partition of Bharatavarsha, certain aspects of Sanatana Dharma is forgotten by our Dharmic population. Through this article I am trying to rekindle the lost wisdom to remind people about the civilizational battle that is now right in front of them,  exactly like how Arjuna and the Pandavas saw the Kurukshetra War right in front of them.

It also looks closely at the role of MK Gandhi in making people forget Krishna Dharma, due to his wrong interpretation of Bhagavat Gita,  due to his establishing  of the Abrahamic appeasement politics in India,  his bad political-leadership choices for India and due to his Adharmic life experiments.

If one has read Mahabharata correctly and deeply, then you must have seen inside it, the clash between Yudhisthira Dharma and Krishna Dharma. Yudhisthira Dharma believes in being lawful and Dharmic towards Adharmis or those who do not follow Dharma. Krishna Dharma believes in denying law and Dharmic treatment to Adharmis or to those who don’t follow Dharma.

Yudhisthira Dharma could have ensured utter failure of the Pandavas either by accepting another 12 year vanvas instead of choosing battle. Even if they chose to battle, a defeat under Bhishma, Drona or Karna would have been the result by trying to deal them Dharmically. Krishna Dharma ensured that Bhishma, Drona, Karna and Duryodhana are eliminated or killed unlawfully. Because they were Adharmic in various degrees.

Bhishma, for looking at the disrobing of Draupadi doing nothing, thinking that, as per the then law of the land, a master has full control over his slave and a slave should obey and perform any act that her master ask her to do. Drona did the same.

Bhishma and Drona represent those people of today who think the current law of the land (like judiciary, Supreme Court, High Court) is the real Dharma or a substitute for Dharma, or that Dharma is a set of laws without concern for the contexts. Real Dharma always has a context. Dharmic laws are always contextual unlike most Judicial systems of the world which derives from the rigidity of Abrahamism (one law fits for all and for all contexts).

So, Bhishma is eliminated by shooting (by Arjuna) from behind another warrior (Shikandi), unlawful but correct thing as per Krishna Dharma. Drona was killed (by Dhrshtadyumna) when he was not fighting but when he was in a state of trance, unlawful but correct as per Krishna Dharma. To prepare for Drona’s death Krishna asks Yudhisthira to tell the half lie that Ashvathama (the elephant, not Drona’s son) is dead. A rare direct clash of Krishna Dharma with Yudhisthira Dharma!

Arjuna’s delusion and subsequent Gita discourse was actually a clash of Yudhisthira Dharma (which Arjuna imbibed plentiful) with Krishna Dharma.

Our Dharmic side, especially Twitter, Facebook warriors, on the street Dharma defenders – RSS and Modi government should understand this.

Following the Yudhisthira Dharma and ignoring the Krishna Dharma, king Pritviraj Chouhan failed and opened the gates of our civilization, so that many powerful tribes of Adharma could enter this Dharma Bhumi and make all of us slaves. We should not make this mistake which Prithviraj had done. As per traditional folklore and historical accounts, Prithviraj defeated Ghori 17 or more times but he let off Ghori. In the last time Ghori defeated Prithviraj and took him to Afghanistan, blinded him. But blind Prithviraj shot Ghori using an arrow. But as per some history records he defeated Ghori only once but Ghori ran away and came back next time to defeat Prithviraj and took him as a captive.

Hence Prithviraj is a symbolic representation of any of our historical rulers who dealt lawfully to unlawful invaders in violation of Krishna Dharma. The observation remains valid if we replace Prithviraj with any such rulers. The most important message is that our current rulers should not have the mistakes of our old rulers who had got a shorter time span to recognize the invaders. We have got 1000 years of hindsight dealing with invaders and if we still apply Yudhisthira Dharma to them instead of Krishna Dharma, our civilization will get destroyed and we become history and end up like the ancient Arabian polytheist civilization, vilified as evil, dismissed and superseded by Abrahamism.

Communism, Gandhism, Securism, Feminism, Abrahamism, political correctness, most of Western norms though not all, these are modern Adharma. Whenever we deal with the members of any of these Adharmic groups, we need to follow Krishna Dharma and not Yudhisthira Dharma.

How we forgot Krishna Dharma? We forgot him exactly in the 1940s due to the distortions and aura of Gandhi, who pushed cowardice, passivism and rejection of the Kshatriya Dharma by defining it as ‘ahimsa’ (not the kind of ahimsa you see in our Dharma Shastras, because himsa for self defence is always applauded and approved in Dharma Shastras).

My studies indicate that the Gandhi surname, apart from being traced to traders of fragrance ‘Gandha’, is also traceable to Gandhara / Gandhari / Gandharva. Sakunki, Subala and and the wife of Dhrtarashtra were all Gandharis. Gandharis as traders spread from Gandhara desha (Charasadda valley in the north west Pakistan) to the west cost of India, to Gujarat in the north to all the way down south into Karnataka. Pockets of Gandhari-traders abound in Gujarat, in Maharastra (like the Gandhara village in Kalyan) and in coastal Karnataka. (But not all Gandhis are to be painted with the same brush as good and bad individuals are there in every group).

MK Gandhi was the worst interpreter of the Gita. Like the mother of Kauravas viz. Gandhari who interpreted Krishna as the villian of Mahabharata, as the cause of all violence in Mahabharata (absolving her children from any complicity in the destruction of the entire race), like Shakuni misinterpreted Krishna, MK Gandhi’s interpretation of Gita is totally wrong.

It absolves the perpetrators of violence from any responsibility but criticize any natural reactions in self defence. As a result, the Dharmic resistance to Abrahamic aggression since 1921 to 1947 and beyond were criticized by Gandhi. He endorsed the aggressors (aatatayis) and urged the Dharmic side to suffer the violence peacefully without retaliating and urged to make peace with the aggressors. This lead to the partition.

Gandhara, Kekaya, Madra, Kamboja, Sindhu, Sauvira, Sivi, Panchanada, Ambasta and other such north western kingdoms of Bharatavarsha became separate from Bharata and came to be known as Pakistan, the land of Abrahamism.

Gandhi’s Gita interpretation makes Arjunastithi as the final essence of Gita! Arjuna-stithi or Arjuna-vishada-avastas is the state of Dharmic ignorance, of Dharma-sankata or of utter confusion. Gandhi lived his entire life in this Arjuna stithi. He had not moved an inch beyond the Chapter One (Arjuna stithi) of Gita. This last but one verse of Gita Chapter 1 explains his state, from where he has not progressed:-

If I, without any aggressive reaction , become weaponless and get killed by the weapon wielding Dhartarastras in battle, then that is the beneficial thing for me!

In place of the Dhartharastras (Kauravas) of the Mahabharata times, in the 21st century, it is the grand Adharmic alliance of the Abrahamo-Leftists who are in our opposition.

This is Gandhism teaching the young generation of our times! Without raising an eyebrow, be defenseless, be devoid of aggression, embrace passivity and call it ahimsa, submit to the rising army and the growing war cry of Abrahamism and other allied isms like Communism, Feminism etc, that has formed the 11 Akshouhinis of grand Adharmic alliance against Sanatana Dharma!

Gandhi’s Bhrahmacharya experiments were Adharmic because nobody performs Kaula Tantra practices and call it Brahmacharya. Both are at two ends of the Dharmic spectrum. Renunciation of family, rejection of all social ties and social activities including politics, is prescribed for practicing Kaula Tantra. A Brahmachari always stays away from the presence of opposite sex, like Ayyappan and Bhishma. So what Gandhi did with girls of his grand-daughter age was wrong. It wasn’t Brahmacharya at all. That should have enough to recognize that he had no knowledge of Dharma but most of the contemporaries could not recognize this fake leader except few like Sri Aurobindo.

The Buddhists world over like in Myanmar and Srilanka are now better in fighting Abrahamism. Because contrary to the popular belief, Sri Buddha has not interfered with the Kshatriya Dharma, or in the fight for self defense. Gandhian Ahimsa model where even fighting for self defense, is looked down upon as himsa or wrong, is a unique contribution of this fake leader MKG, the father of Abrahamic religious appeasement politics and the father of selective appreciation (ie appreciating and promoting Javaharlal Nehru while ignoring Sardar Patel who was then having more merits than Nehru, to rule the country as the first prime minister.)

In conclusion, it is clear to us that we need to critically analyze the message that Krishna provided to us through Mahabharata, when Dharma or the Dharmic civilization is in acute danger due to the rise of Adharma, like it was for the Pandavas during the Kurukshetra War and like it is now. This involves the denial of sympathy and any lawful treatment to those who refuse to deal with us lawfully. Dharmic treatment can only be provided to those who offer the same Dharmic treatment to us.

This is Krishna Dharma. This is diametrically opposite to the teachings of MK Gandhi, his appeasement politics and his favoritism of unworthy individuals by ignoring people with true merits. Krishna Dharma is also described in Dharma Sastras as the Apat Dharma, invoked when Dharma and the individual followers of Dharma are in danger like today, and like it was the situation of the Pandavas during Kurukshetra War.

Krishna Dharma is also captured in the famous saying:- ‘Dharmo Rakshati Rakshita’. Dharma protects those who protect Dharma. Dharma doesn’t offer any protection to those who don’t work for protecting Dharma. Certainly, it follows that Dharma don’t protect anyone who is working to destroy Dharma.

Did Draupadi Insult Duryodhana during Rajasuya, Karna in Swayamvara?