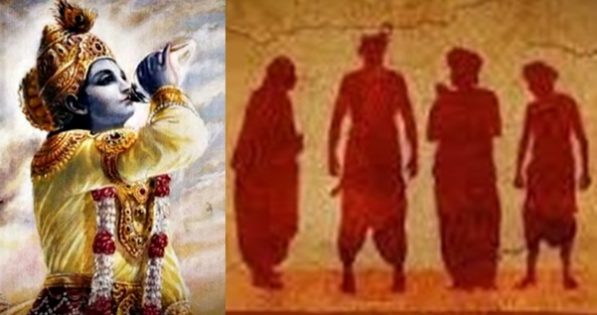 I had posted on Krishna Dharma (click here to read) before and here is an analysis on Krishna’s definition of Varna (or Chaturvarnya).

Discussions on giving temple entry to people of all Jaatis is discussed even in this 21st century without regards to the context in time and space. The primary reason why there are restrictions in our temples in contrast to a church or a mosque (places of congregation of the faithful believer in the Abrahamic monotheist god) is due to the concept called shuddhi and/or bhava of the devata.

Due to shuddhi, except the pujari (shanti, purohita, or archaka, as they are known in the north, or priest) none is allowed to be close to the vigraha of the moorthy. This is strictly followed in southern temples, especially in Kerala, but not so strict in the north.

Due to the same reason of shuddhi, the jaatis dealing with dead body, body hair, and body waste were not allowed entry into few temples. But starting since 19th century, these and many other occupations are not followed hereditarily and the concept of not allowing the devotees into temple based on their jaati is null and void.

To bring this Dharmic change into our society many acharyas like Sri Narayana Guru and Chattampi Swamikal were born, focused primarily in the south. They made this important change in the society in their life time. But unfortunately, its impact has not reached all over India. No entry of certain jaatis into temple is now modified by Narayana Guru into no entry if you don’t bath or clean in your body.

This is best exemplified by an incident. Once a group of Pulayas and Parayas requested entry into a temple established by Narayana Guru. Then he said if anyone of you has taken a bath, and clean in body, you can enter the temple. Then the crowd stayed out with sad faces, because none had taken a bath or were clean in their body. Then a big rain started. All the crowd got thoroughly washed. Then Narayana Guru gave entry to all of these Pulayas and Parayas (then considered as SC/ST).

So, it is clear that, from 19th and 20th century onwards, the condition to enter temple for devotees following Sanatana Dharma is, to be clean in body having done a good bath.

The next part is the bhava of the devata. If the devata is installed in the temple with a nitya brahmachari bhava, then women of menstrual age are restricted there. This is the situation in Sabarimala. It is like the devotees are agreeing to the bhava of the devata, as part of their bhakti. The same devata, like Ayyappan, may be there with a different bhava in a nearby temple a kilometre away, where women of all age can enter. In this way, there are women-only temples for Bhagavati in Kerala and there are temples where a priest from a particular jaati alone has the adhikara to be the temple-priest.

So deha shuddhi and bhava of the devata are the only two things one need to consider while entering a temple for anyone following Sanatana Dharma.

Dharma is not static like Abrahamism. Dharma adapts to the changing circumstances and is contextual and hence it is eternal. Hence the Dharma Shastras cannot be read like the Biblical or Quranic commandments which are assumed to be true at all times and at all places without regard to the contexts in space and time.

Hence, if there are information in the Dharma Shastras, preventing some communities based on their jaatis from entering a temple, asking them to stay away and get the desired phala by merely looking at the dhvaja stambha etc, such notions are not applicable after 19th century when jaatis became unrelated to the certain occupations like tending to dead bodies, cutting hair, handling body waste and sewage, etc..

Can Chaturvarnya be good or bad? There can be conflicting views. Here I am pointing to a middle view. It may help to bridge the divergent views regarding this.

But there are two defects in the Chaturvarnya that existed in our Dharmic society for a long period of time as attested by the later parts of the Rigveda, the Ramayana and the Mahabharata.

Varna defined by birth is a corruption. Vasudeva Krishna in Bhagavad Gita rejected it saying ‘chaturvarnyam maya srshtam guna karma vibhagashaha‘ – that he is the creator of Chaturvarnya which is natural, viz based on Guna and Karma (i.e. not based on birth).

For example, if you are inclined to study the ancient texts by nature, you are a Brahmana by Guna. If your work is that of a scholar, you are a Brahmana by Karma. If your passion is protecting the persecuted members of our Dharmic civilization you are then a Kshatriya by Guna. If protecting Dharma using arms or words (which includes twitter battles) is your work then you are a Kshatriya by Karma. If you are a businessman and inclined to support the Dharmic warriors and the Dharmic scholars financially then you are a Vaishya by guna-karmas. If you offer your efforts and time to the Dharmic warriors of all hues (online and on-road) and also the Dharmic scholars, if you offer to support them in the diverse possible ways, then you are a Dharmic Shudra by guna-karmas.

This is the Chaturvarnya envisaged by Krishna based on Guna and Karma.

As attested in the Mahabharata and Ramayana itself there were people who don’t subscribe to the Varna based on guna and karma, there were those who wanted it to be based on birth trying even to influence Rama and Krishna.

The hierarchical interpretation (there are non-hierarchical interpretation too) of the Chaturvarnya in the Purushasukta, in the late part of the Rgveda (mandala 10, 90th hymn), the struggles of the Kshatriya Vishvamitra to be recognized as a Brahma-Rshi, the Bhargava Rama – Kartaviry Arjuna conflict ending at the Bhargava Rama – Raghava Rama conflict, the narrative of Shambhuka Vadha (the killing of a Sudra who did Tapas) in the late part of Ramayana (Uttarakanda) and the hurdles faced by Karna, Ekalavya, Vidura and Krishna and the narrative of Durvasa abusing Krishna and Rukmini yoking them to a chariot as horses as described in the Mahabharata – all of these has to be analysed in this respect – viz the continuing conflict between Varna based on guna-karmas and the Varna based on birth.

We need to thus find new answers to the old questions. The rules of temple entry changed the moment occupations stopped being jaati-centric and hereditary. Due to this, denying temple entry by any old shastra injunctions since 19th to 20th century is wrong.

The question on the suddhi required to enter the temple has a new answer viz deha shuddhi, not birth in a particular jaati. Due to the same reasons, conflating the ‘purva janma karma phala‘ with ‘birth in a specific jaati‘ is also wrong today.

As a result, the 21st century is the perfect stage set for Krishna’s ideal of varna based on guna and karma, instead of it being based on birth. Those who identify as Brahmanas, Kshatriyas, Vaishyas, Sudras etc based on birth, can continue it, but not as varna but as surnames of jaatis.

Jaatis will continue in the 21st century but not as the markers of occupations, but as the distinct social units with distinct marriage customs and other specific customs for janma, namakarana, marana etc. Jaati will exist but without any concept of hierarchy, viz one jaati understood as above another jaati.

With hierarchy of jaati gone, it having delinked with the occupations, jaati will serve as the endo-skeleton of the Dharmic tradition resisting the Abrahamic conversions and strengthening Dharma’s defences and offences against Abrahamism, both in words and acts.

All new answers to old questions. The result is that, we can realize the ideal of Krishna’s Chaturvarnya or Krishna Varna, viz. the four fluid Varnas not based on birth but based on the individual’s Guna (the innate nature, the inclinations, wishes, dreams and life missions etc) and Karma (the primary activity, daily actions etc) in this 21st century!

How wonderful Sanatana Dharma would be with that?

Towards India’s New Era Paradigm: Reformulating Karma and Past Lives