Did Draupadi Insult Duryodhana during Rajasuya, Karna in Swayamvara? 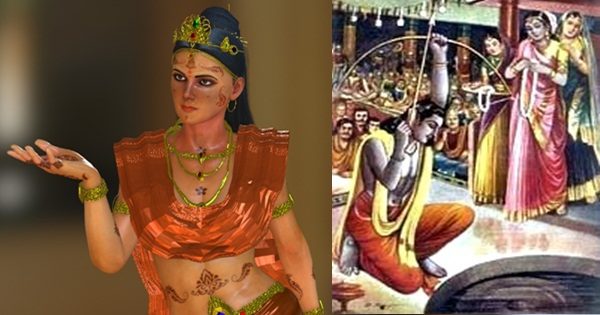 This article is about the character of Panchali. She is known by the names Krishna, Draupadi, Yajnaseni and Panchali.

Through three incidents we explore the true nature of this most discussed woman of Mahabharata. Due to the various Mahabharata retellings and the highly popular TV shows, there are are many misunderstandings about the true nature of Panchali. Did she insult Karna during Swayamvara at Kampilya? Did she laugh at Duryodhana during the Rajasuya at Maya Sabha? What happened at Kuru Sabha during Dyuta Kreeda, the game of dice? Who protected her with a torrent of cloths when Duhsasana tried to disrobe her? How is this incident aligned to Krishna Dharma?

If you have such questions do read on. This article tries to address these questions by diving through the original sources in the Mahabharata critical edition.

An important event in Mahabharata regarding Draupadi which altered the character of Draupadi as an undesirable consequence of meddling with the Mahabharata:-

Did Draupadi insult Karna during Swayamvara?

Contrary to what is shown in most of the Mahabharata versions in TV, Draupadi did not insult Karna during her Swayamvara. The passages mentioning that Karna lifted the bow ready to shoot the target but Draupadi shouted saying:- ‘ I will not select a Suuta for my husband’ – this is a later addition not found in the older versions of Mahabharata:-

This later addition is found in the Bengal version of Mahabharata where the interpolated verses added later are reproduced here:-

Kisari Mohan Ganguli translates these verses like this:- Beholding the plight of those monarchs, Karna that foremost of all wielders of the bow went to where the bow was, and quickly raising it strung it and placed the arrows on the string. Beholding the son of Surya, Karna of the Suta tribe, like unto fire, or Soma, or Surya himself, resolved to shoot the mark, those foremost of bowmen, the sons of Pandu, regarded the mark as already shot and brought down upon the ground. But seeing Karna, Draupadi loudly said, I will not select a Suta for my lord. Then Karna, laughing in vexation and casting glance at the Sun, threw aside the bow already drawn to a circle.

If we remove these later additions from the Mahabharata, it becomes clear that Karna had no reason advising Duryodhana to disrobe Draupadi during the game of dice incident. He could not win the competition. Plain simple reason. She has never insulted Karna by bringing out his Suta varna. So Karna’s anger towards Draupadi was driven by pure jealousy because his rival Arjuna won the competition and got Draupadi.

One less blemish on Draupadi, one among the Pancha Kanyas!

One blemish more on Karna, a character which was constantly whitewashed by later redactors of Mahabharata, achieved by throwing some stain upon others like Draupadi and Arjuna and raising his image, like by inserting an entire chapter of Karna-Digvijaya (a military expedition of Karna, like the military expeditions done by Arjuna, Bhima, Nakula and Sahadeva) towards the end of Mahabharata!

Did Draupadi insult Duryodhana during Rajasuya?

Duryodhana says this about his humiliation during the Rajasuya event: “Bringing jewels from the lake Vindu, the Asura architect Maya constructed for the Pandavas a lake-like surface made of crystal.

Beholding the artificial lotuses with which it was filled, I mistook it, O king for water. And seeing me draw up my clothes while about to cross it, Bhima laughed at me. If I had the ability, I would, without the loss of a moment, slay Vrikodara for that. But, if we endeavor to slay Bhima now, without doubt, ours will be the fate of Sisupala. That insult by the foe burns me. Once again, O king, beholding a similar lake that is really full of water but which I mistook for a crystal surface, I fell into it. Then Bhima with Arjuna once more laughed derisively, and Draupadi also accompanied by other females joined in the laughter. That pains my heart exceedingly. My apparel having been wet, the menials at the command of the king gave me other clothes. That also is my great sorrow.

So the crime of Draupadi here is joining the laughter initiated by Bhima and then Arjuna when Duryodhana lifted his cloths while walking on the smooth reflective floor thinking it is water and when he walked straight into water while thinking it was just a floor.

I have checked in multiple version including the Critical Edition and yes, Draupadi did laugh at Duryodhana. But she was only joining the laughter initiated by Bhima and Arjuna and never said the words:- ‘Blind son of the blind father’. Such a dialog putting a blemish on the character of Draupadi is a later addition.

Getting a laughter triggered by the laughter of others is an innocent act, but to insult a person by calling him blind and linking it with the blindness of his father is gross, and Draupadi has not done that, she only laughed innocently. 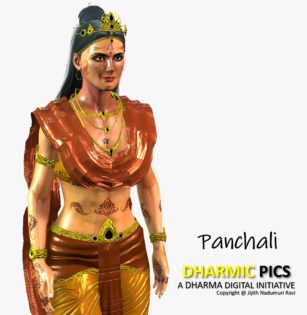 Photographic snapshot of the DharmaDigital hologram of Panchali.

It seems the later redactors wantonly darkened the character of Draupadi by putting words in her mouth which neither Vyasa, Vaisampayana or Sauti intended in their narratives.

Here is the narration of the Kaurava Sabha incident that has happened with Draupadi as described in the Critical Edition which has preserved the oldest verses found in all the regional variants and has removed those which are not.

Vikarna, the younger brother of Duryodhana sided with Draupadi and said that she is not a slave, because Yudhisthira was already a slave when he staked Draupadi and a slave has no right to stake another individual like Draupadi who is free. Then Karna says this to Duhshasana refuting Vikarna:-

“One husband for a woman in marriage is declared by the devas o Kaurava. But she gives into many and so is a Bandhaki (prostitute) certainly. Hence bringing her in this sabha is not abnormal, in my view, be it with single garment or with no garment at all. Whatever wealth the Pandavas possessed, including her, Shakuni has won them all as per Dharma. O Duhsasana, this Vikarna is talking like a child. Take away the cloths of Pandavas and Draupadi”.

Hearing this, the Pandavas took off their Uttariya (upper garments) and sat down in the Sabha

Then Duhsasana, O king, forcibly pulled Draupadi’s cloths in the midst of the Sabha, in front of everyone.

As the cloth was being pulled away from Draupadi, O king, many other similar cloths appeared!

At this, sounds of uproar and terrible sighs reverberated there. That great wonder of the world was witnessed by all the kings.

After this Bhima pledges to kill Duhsana, break open his chest and drink his blood.

When the collection of cloths piled up in the middle of the sabha, Duhsanaa, becoming tired and ashamed, sat down finally.

As you can clearly see, it was Karna who has instigated Duhsasana to do this heinous act. We have already seen in my previous posts, that Panchali has not insulted Karna calling him as Suta Putra, in the critical edition, unlike it is portrayed in some regional versions. So what Karna does here is grave insult of Draupadi due to his jealousy of not able to get Draupadi for himself and because his arch rival Arjuna has won her lawfully at Panchala in the Swayamvara. This clearly shows the true character of Karna, with his acts of Dana (donations to those who ask something) a cover for his true negative mind. He also interprets Adharma as Dharma!

You can also see there is no mention of Krishna Vasudeva providing cloths to Panchali by magically working from Dwaraka.

These verses make it clear that Draupadi generated the new cloths all by herself magically. Krishna is the name of Draupadi too. So we have to assume Draupadi (Krishna ) saved herself (Draupadi)!

But for those who want a more rational explanation, it could be Vidura (with the help of the royal ladies like Kunti, Gandhari and others who watched all the horrible proceedings) who might have arranged this.

He has already proved he can do such unexpected magical things, by creating that secret tunnel in the house of lac at Varanavati, to rescue the Pandavas when it was set to flame to murder them.

Vidura could arrange a torrent of cloths to fall from the upper floors of the Sabha. Draupadi wrapped herself with the new cloths or got fully covered by the torrent of cloths that fell down upon her. This can explain what is found in the critical edition of Mahabharata after excising all the interpolated verses.

Then it will be an act of Krishna Dharma, where a person inspired by Krishna, in this case Vidura, act promptly in the defense of Dharma.

This is what I would like to believe. This is how each of us has to behave when we see Adharma. We need to be an agent of Krishna Dharma and act swiftly and decisively to stop Adharma or to alter the Adharmic outcome. Only Vidura, and to some extend Vikarna, was following Krishna Dharm in the Kaurava Sabha when Draupadi was being humiliated.

Bhishma, Drona, Kripa, Dhritarashtra and others were stuck with the existing laws about the master-slave relationship. They refused to intervene, stating that a slave (Draupadi) has to obey whatever her master (Duryodhana) has to say or that the master has full rights over the slave. Established laws of the land, like the current judicial laws can take similar rigid form with complicated nuances like this, and then they becomes ineffective to give justice to the true victim. Such situations has occurred many times in our society and in our country. Karna was portraying Dharma as Adharma !!

Shakuni, Duryodhana and Duhshasna were executing Adharma, emboldened and endorsed by Karna who has got some reputation as a man of Dharma or as a man who give donations (philanthrophy) or the one who inclined to help anyone seeking help (Daanaveera). This is a common thing that happens when a society turns predominantly Adharmic. People with the good reputation and counted as Dharmic, or well known as not so evil (boundary cases) may side with Adharma and interpret any Adharmic act as pure Dharma ! This also happens frequently in our society and in our country.

Please be aware of both types of people (Bhishma, Drona and Kripa type) who come as judges and lawyers and those others like Karna with a reputation of a good person but not so good from the inside who can interpret a wrong thing as right.

Please be like Vidura who abide by Krishna Dharma.

Featured image: Photographic snapshot of the DharmaDigital hologram of Panchali and Krishnakosh.

Allegorical Interpretation of Draupadi’s Abuse and other Myths

Is Kohinoor Diamond the Syamantaka of Mahabharat Era? An Analysis