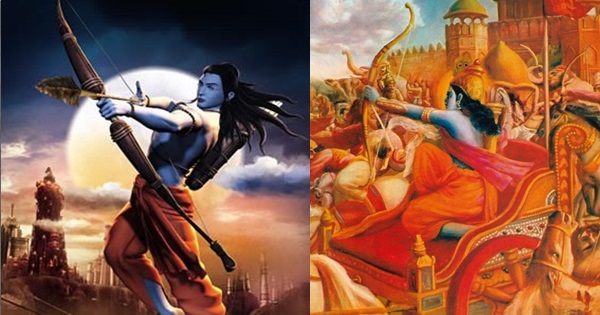 Time and again, we have seen people referring to Ramayana and Mahabharata as Hindu Mythology. Last year, Abhinandan Sekhri of News Laundry was interviewing Vivek Agnihotri, the Director of the movie Buddha In A Traffic Jam and the author of the book Urban Naxals. Sekhri had that patented “intellectual smirk” and derision in his demeanor, words and even in the way he sat. He told Agnihotri, “There is some evidence that Jesus and Mohammed existed and there is no evidence to Rama and Krishna being real.”

I consistently see a lot of Internet Christians and Internet Muslims along with the intellectual brigade labeling Rama and Krishna as Hindu Mythology. This Mythology is a dirty word. Length and breadth of India has footprints of Rama and Krishna. Ramayana and Mahabharata are unchronicled and glamourised pieces of history. They are so old, we have no idea how to decode them. That is why the Western Indologists took the easy way out to condemn them as Mythology to serve the duel purpose of minimising the civilization of Bharat and glorifying their own flimsy history. We have happily swallowed this without questioning the prejudice.

Coming to the Muslims and Christians who call Ramayana and Mahabharata as Mythology, I have paid with them in their own coin. There was a Christian Comrade who used to post like, “Wishing Happy Janmashtami to all those who believe in a mythological God who was born in a jail, married thousands of women and was killed by an arrow.” He was smart enough to post “Eid Mubarak. Let peace and prosperity prevail as wished by the Holy Prophet PUBH.” His Christmas and Easter messages too were very pious, full of love.

I sent him a Christmas message, “Wishing Happy Christmas to all those who believe in a mythological Son of God who was born to a virgin, converted water into wine and was killed by nailing to a cross. Will come back to the return of the Son of God part during Easter.” He was furious and called me on mobile just to call me communal. I sent him screen shots of his own Janmashtami message.

He started arguing in the same manner that Abhinandan Sekhri did with Vivek Agnihotri. He told me, there was “some” evidence to Jesus and Mohammed but all of Ramayana and Mahabharata was Mythology. I asked him, “You mean, a book that says God created this earth and worked hard for six days and took rest on the seventh day ? You mean the book that says he created Man out of nothing but needed the Man’s rib to create woman ? You mean the God who created all of us but gave us will to sin willfully and sent his son to make an advanced atonement for all our sins with his blood ?”

He was losing his bearings. He said, “See, there are millions of references to Jesus and Mohammed worldwide. Rama and Krishna are just restricted to India. How can you explain that ?” I replied, “Ali Baba, Aladin, Mandrake, Superman, Donald Duck, Mickey Mouse, Tom and Jerry are known worldwide. Shaktiman and Chhota Bhim are known mostly to Indians. So, according to you, the first set of characters exist and the second set don’t. Right ? Well, Rama and Krishna are known not only in India but were known to most of Indian subcontinent, South Asia and even in the present day Islamic countries like Indonesia and Malaysia.”

I continued, “If you can believe a man split the Moon into two and went to heaven on a chariot drawn by golden horses, if you can believe in virgin birth and resurrection, you can as well believe in the Mythology of Krypton and the God who wears the underwear over his pants. If Rama and Krishna are Hindu Mythology, Jesus is Christian Mythology and Mohammed is Muslim Mythology. It is as simple as that. Either everything about faith is sacred, should be respected and out of bounds for criticism or everything is Mythology and can be questioned and criticised. You can not be selectively rational and be an irrational defendant of your own faith.”

This has worked well for me. Anybody who starts conversation with, “According to Hindu Mythology…” gets “According to Christian Mythology…” and “According to Muslim Mythology…” from me. I am an agnostic in search of my identity. But I believe in fair play. I am proud of my roots that has not blinded me and bound me to believe in what a “single book” says and negate everything else.

I don’t believe Rama and Krishna were Gods. I strongly believe they were historical human beings of extraordinary character. They were deified by the people of their times and the subsequent generations. If people can build temples for NTR, Khushboo, Sonia and Modi in the twenty first century, great men with magnificent achievements becoming Gods in ancient times should not surprise us.