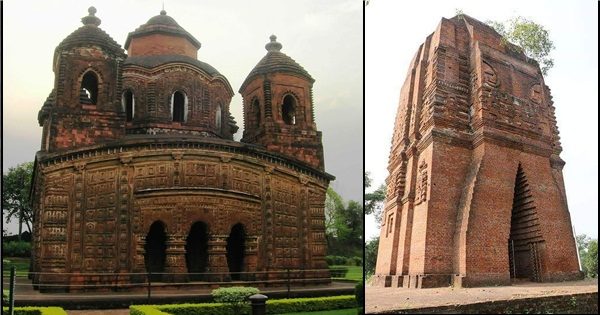 Since I was a child, I was always fascinated by the conspicuous shape and structure of the magnanimously constructed temples of Bengal. The palatial Chhoto Rashabari, standing tall almost opposite my house, had always caught my eye and attention, as it silently watched over this cosy little place. Little did I know, that this grandiose-yet-familial House of the Gods, was a fragrant reminiscent of the glorious tradition of the land of Bengal.

What astounds me, is the corroborated fact that plurality resides even in our beloved indigenous Indian culture, the fact the every single sphere or walk of life, is blessed with multitudinous facets, even temple construction. To a North-Indian growing up in Bengal, there was a greater sense of belonging towards those adorably spherical Mondirs, than towards those uprightly, conical Mandirs, with great beauty residing in both. 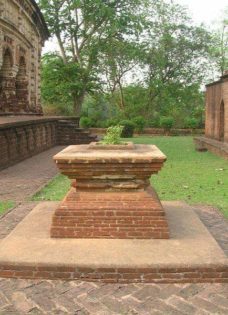 Bengal’s treasured temples come in several sub-sets or sub-categories. These are: 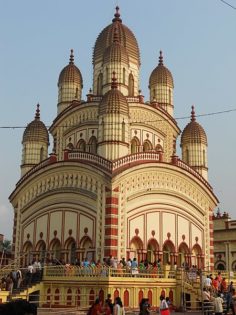 The majestic Noborotno Dakshineshwar Temple near Kolkata’s Hoogly, built by Rani Rashmoni in 1855, with its presiding deity being Maa Bhavatarini, an aspect of Maa Kali. Image courtesy/source: Wikimedia

The Chala is the unique characteristic of traditional Bengali temple architecture. It is marked by the presence of a convex-sloping roof. Remember those drawing classes? Where everyone had to mandatorily draw a generic yet iconic temple? Yes, that is an Atchala Mondir. 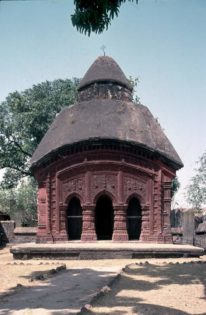 The Chala comes in a few variants, like the Douchala, Chaarchala, Atchala and Barochala, with each having 2, 4, 8 and 12 sloping roofs respectively. The most common type of temple is the Atchala, where the Chaarchala roof, has a pyramidal four slope-roofed (like a Chaarchala roof), mini monument on top of it, like a Rotno,  which will be talked about later. This type of temple can be seen actually almost everywhere in Bengal. The Barochala is relatively rarer.

Another arresting style is the Jor-Bangla temple (জোড়-বাংলা), which is the combination of two Douchala temples which are placed absolutely adjacently to each other. Often, accompanied by that aforementioned Rotno on top.

Rotno Mondirs are again a classic architectural type of temples in Bengal. The unique feature about Rotno Mondirs is that, they bear uncanny resemblance to medieval European Castles, although being completely unrelated to them as most of these types of temples were built before the European arrival. 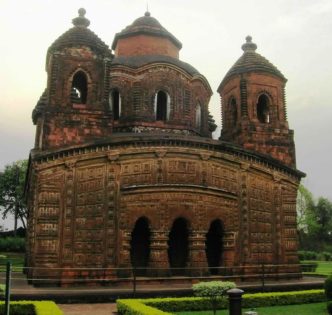 Bishnupur Temple – Krishna Ponchorotno Mondir, built by the king aforementioned, Raja Raghunath Singh. Note that the intricate carvings in Bengali Temples (the historical kind) were often made of terracotta, due to the easy availability of clay near river banks. Also noteworthy is the prominent existence and prevalence of Krishna Temples, which direct us to the realisation of the widespread Krishna-Bhakti practised in Bengal, especially during the medieval times (although it was ancient in origin) plausibly due to the influence of Chaitanya Mahaprabhu’s teachings.
Image Source/Courtesy: famousplacesinindia.in

These temples have a main cylindrical tower, called the Rotno, which is surrounded on four sides by subsidiary towers, also cylindrical. However, these towers can be four-sloped and non-cylindrical as well, similar to the mini-monument on top in the Atchala Mondir type, spoken about earlier.

Rotno Mondirs come in odd number categories always: Ekrotno (1-Spired), Ponchorotno (5-Spired), Noborotno (very common type, 9-Spired), Ekadoshrotno (11-Spired) and the Ponchodoshrotno (15-Spired). The cylindrical rotno have a spike at the top for embellishment, and are immensely decorated with miniature sculptures, like every other historical temple. 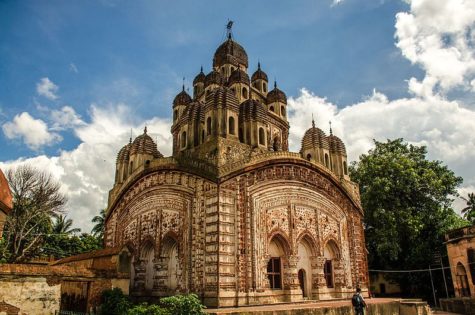 The Krishno Chondro Temple at Kalna. It is a Ponchodoshrotno Temple, in other words, a 15-Spired Temple. (Ponchodosh=15 in Bangla). Image Courtesy/Source: Wikimedia.

The buildings are the kind one would quite often see in those big North-Calcuttan Baris, with one-floor monuments strewn with several pillars towards their edge. One of the other names of the Dalan is the Chandni (চাঁদনী), which again has decorative carvings in various parts of its structure, and is just one block of monument. 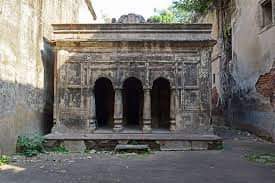 A Dalan Chandni Temple inside the Kaviraj Bari in Bardhaman. Image courtesy: Wikimedia

Another extremely interesting structure is the Deul, which has captivating origins. The Bengali Deul, is intriguingly similar to its southern sister, the Oriya Deula, both almost identical designs of the construction under which the Moorti is kept, or the Garbhagriha area. These two features are further similar to the North-Indian Shikhar, a conical or cylindrical (tapered towards the end) monument which is constructed as the main area of the temple, which, as mentioned earlier, is the Garbhagriha. The Shikhar is adjoined with the Mandap, the area meant for public assembly in the temple. However, this feature is absent in the Bangali Deul, as well as the Oriya Deula. 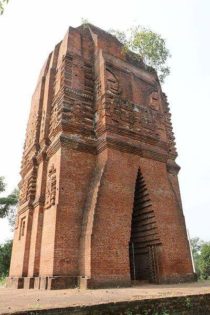 The Deul is a stand-alone structure, without the Mandap, cylindrical in shape, with ridge-like sculpturing on its surface. Now, whether the Deul came first or the Deula, is a matter of debate, which I’m not going into, lest we want another Bengal-Orissa patent fight. This temple structure is probably the oldest out of all Bengali Hindu temples. 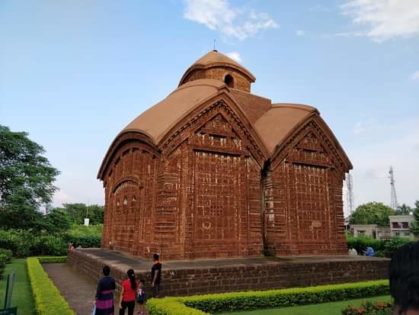 An impressive Jor-Bangla (with the Rotno on top) in the heritage town of Bishnupur, built in 1655, by King Raghunath Singh of the Mallabhum Dynasty, which ruled the present Bakura District of Bengal, with Bishnupur as their State’s Capital, hence of site of numerous architectural wonders. The Mallabhum Dynasty had an astonishing reign of over 1400 years, from the 7th Century Ad to the 20th Century, and ruled Classical Bengal. Image Source/Courtesy: tripadvisor.com

The Moncho too comes in few sub-categories; the Rash Moncho, Dol Moncho and the Tulsi Moncho. The Rash Moncho is a distinctive type of temple which is constituted by a four sided, square-like, pillared enclosure within which stands a monument, which can either be a Rotno tower, or probably any other structure. The Dol Moncho, however differs greatly in design as it almost entirely represents a solitary Rotno, which is smaller and hollow from the bottom. 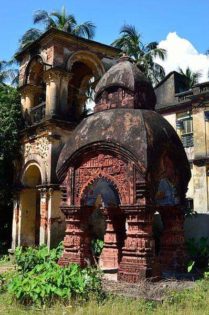 The Dol Moncho near the Damodar Mondir in Rautara. See it’s shape to be similar to an Atchala. Image courtesy: Wikimedia

The purpose of both these Monchos is almost the same: they serve as temporary, occasional temples for Bhagwan Sri Krishna and even Radhaji, when both these Gods are brought to these locations from their main temples from across the town where they are situated permanently, for the celebration of Dol Jatra (Holi in the North), and thus the festival is called Jatra as the Gods travel in a grand palanquin from their chief temple to the Dol Moncho in the Swing Festival.

The Rash Moncho, which too acts like a secondary temple, is a participant in religious celebration during the Rash Festival of Bengal, which uncommonly, takes place in November, for the worship of Sri Krishna and Radhaji, similar to Dol Jatra, but at a greatly different time.

The Tulsi Moncho has the relatively atypical function, which is to be the sacred temple of the divine Tulsiji, and is a beloved member of olden, traditional Hindu families across the country, especially in Bengal, since the dawn of Vedic civilisation in our motherland.

The Moth possesses the most peculiar temple structure out of all. Comprised of marvellously tall, sharply conical spires, they surely remind of the those grim Gothic Churches of Western Europe, and the fact that these Moths were constructed sometime around the 18th-19th Century, Euro-Brirish influence is plausible. 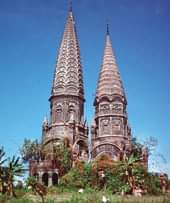 All this is just a fraction of what very endearingly binds me to this wonderful land that has raised me. This beautiful land that I call home. This surreal land called Bangla. Let us all return back to our roots, the roots that are the source of our existence, and behold this land in all its bejewelled history, and let us vow, to restore to our Bangla, its lost splendour. 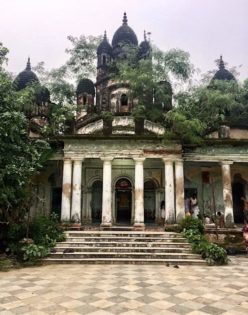