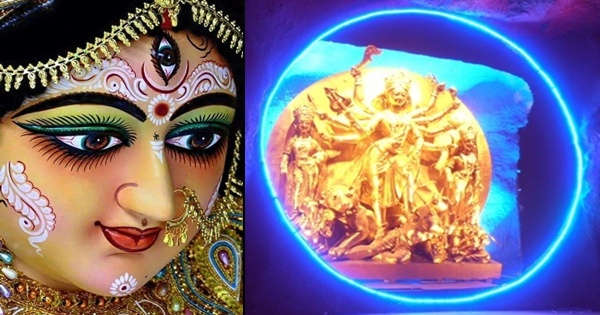 Durga Puja in West Bengal, especially in the capital city of Kolkata, is a time that everybody looks forward to. The very air is charged with a festive atmosphere! The potters at Kumartuli have already started designing the idols a few months back, and there is a whole lot of anticipation and expectation around those magical five days of Durga Puja, known in Bengal simply as pujo. New clothes are bought and gifted, themed pandals are being constructed, and most offices are going to be closed.

Goddess Durga in Bengal is depicted both as a mother figure and as a daughter. She is Maa Durga, the wife of Lord Shiva, and the mother of four children – Lakshmi, Saraswati, Kartik, and Ganesh. She is tall and stately, with long, black hair, wearing a gorgeous sari and adorned with beautiful jewellery – the very essence of feminity. Yet, there is another side to her. She has ten arms and in each hand, she holds a deadly weapon designed to kill the evil demon, Mahishasur. Her ride is a fearsome lion, and she is shown as killing Mahishasur with a spear. 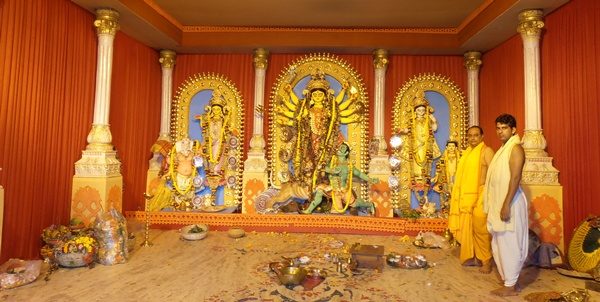 Other than a mother, Durga is also a daughter. Traditionally, Bengalis believe that during pujo, she actually visits her ancestral/paternal home from Kailash with her children. These five days are the days she gets a vacation from her husband’s abode in Kailash. She starts her journey from Kailash on the day of Mahalaya, which marks the beginning of devi paksha. Every year, she comes in a different vehicle. In 2017, her vehicle for arrival is an elephant and for departure is a horse. People perform tarpan (to appease ancestors) and other rituals on this auspicious day.

The five days of Durga Puja, which coincide with the final five days of the Navratri festival celebrated in other parts of India, are Maha Shashti, Maha Saptami, Maha Ashtami, Maha Navami, and Vijaya Dashami (Dussehra). The evening before Shashti, known as Maha Panchami, Durga is welcomed by ladies through a ritual called Bodhan, which marks the formal inauguration of worship and festivities. 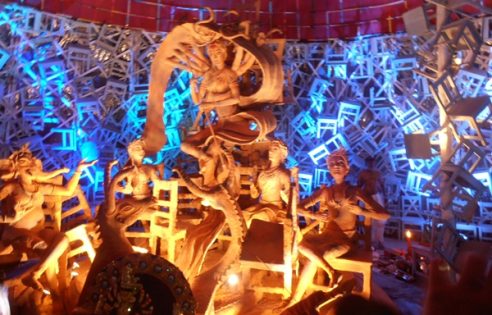 Some of the other rituals associated with Durga Puja include: the Nine Plants Puja conducted on Maha Saptami to worship the nine forms of the Goddess, Kumari Puja conducted on Maha Ashtami where young girls who have not yet reached puberty are dressed as Durga and worshipped as a form of the Goddess herself, the spectacular Sandhi Puja done at the juncture of Maha Ashtami and Maha Navami, and Sindoor Khela, performed on Vijaya Dashami by married women who play with vermilion among themselves. On the last day, a tearful farewell is reserved for the Goddess as she must leave for her husband’s abode again.

Durga Puja in Kolkata is celebrated amongst a riot of lights, the sound of traditional drums called dhak, and themed pandals. Over the years, I remember pandals having themes as varied as Johannesburg Football Stadium, Nepal after earthquake (two years ago, recreated with makeshift houses, mountains, and a rescue helicopter), a modern art exhibition, a mother’s womb, a village in Bengal, Durga with a thousand hands, the Goddess slaying corrupt politicians in place of Mahishasur, and much more. It is a time for enjoyment, vacations, pandal-hopping, and community-bonding. 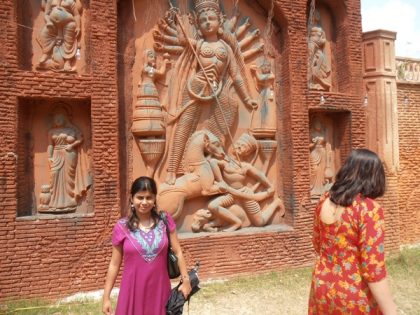 I lived outside West Bengal for over 15 years, and returned to Kolkata only two years ago. In my opinion, celebrating Durga puja is one of the most rewarding experiences of living here.

A Gold Medalist in English Literature, Jagari Mukherjee is a content writer and poet. She has written for magazines, newspapers, webzines and blog platforms. Her debut book 'Blue Rose', a collection of poems, was published in May 2017.