Terracotta: The Indus-Sarasvati Connect to Bengal and Northeast India 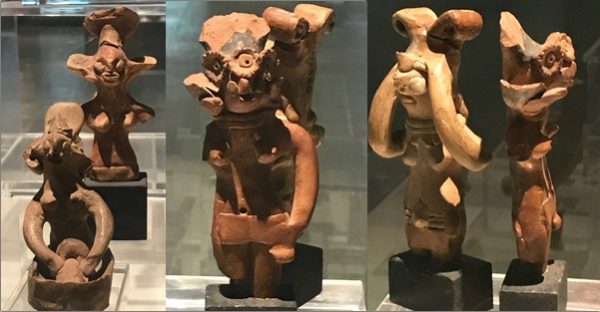 The migration of Indus-Sarasvati people to Eastern India and the longest connect of two Civilisations through a common art!!

Some intriguing excavations from the Indus-Sarasvati Civilization has been a set of terracotta female figurines. One out of the many such discoveries definitely is the very enigmatic and also called “The Mother Goddess”!! This particular sculpture could support at least two theories:

a) The figurine seems to be an abstract art of that period.

b) The depicted female (or such clan) is definitely not from this world. 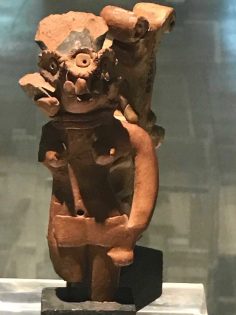 The reason for calling it an abstract art is simply because the Indus-Sarasvati Civilization has certainly thrown out extraordinary artefacts during various excavations including many terracotta potteries, other well defined terracotta human and animal figurines including various models of agricultural techniques, sand stone sculpture of “The Priest”, the red sandstone “Bust of a headless man”, many bronze artefacts including “The Dancing Girl” and “The man in the bullock cart”.

The skill levels of these terracotta sculptures are remarkable and this can be further validated from the numerous complex seals which has been unearthed. The script although remains indecipherable for long unless we excavate a rosette stone or some reference somewhere else!! All these discoveries along with various excavated towns and exquisitely polished granite pillars definitely demonstrates a very advanced Civilization and hence an abstract art format is a strong possibility. 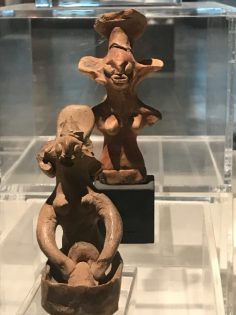 The second theory could be true as well. Which is, that, this particular lady had alien features. If you observe closely she seem to have three eyes!! The facial structure is unusual with extremely large ears, beak like nose and the head has peculiar protuberance, as if a bunch of matted hair has been pulled up to make a head gear.

The other female terracotta figurines representing the same race/clan are equally mystical. While a contemporary female face excavated has well defined facial structure, eyes, ears and nose, albeit with a similar hair style!! However this theory will remain challenged forever for obvious reason! 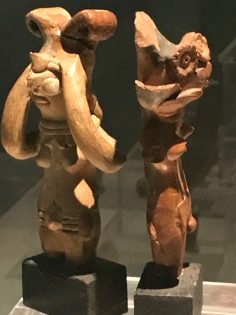 The numerous Indus-Sarasvati excavations of female figurines confirms that this is certainly a distinctive format of art depicting an abstract style from Indus-Sarasvati Civilisation (ignoring the unusual facial features). 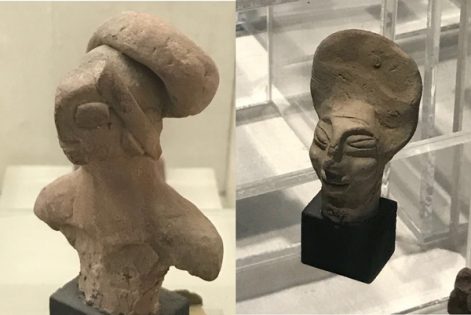 Now let’s travel zippy 6000 years to current time and take a look at some small towns in Bengal, Assam and North Eastern India. There is a traditional art of making unique terracotta dolls even today, called “Tepa Putul” or pressed/pinched form of making clay dolls. These dolls are strikingly similar to the terracotta female figurines from Indus-Sarasvati Civilization (see pics). They are almost identical in all aspects including the head gear, beak like nose and large ears, clearly establishing the possibility of a strong link with the Indus-Sarasvati people and Eastern India, especially undivided Bengal and Assam.

Even today if I give some moulding clay or kneaded dough and ask my grandmother to make a doll she will make an exact replica of Indus-Sarasvati terracotta females. “Tepa Putul” art remained in the genes of Bengal and North East India since ancient days. This format of art is almost lost now and is restricted to a few small towns of West Bengal, Bangladesh, Asharikandi in Dhubri (Assam), Tripura and may be few Northeast states. Asharikandi however is the only town which still carries the tradition with a very strong commitment. Even Poila Boishakh or Bihu, the New Year of Bengal and Assam has glimpses of “Tepa Putul” art in some home made sweets. 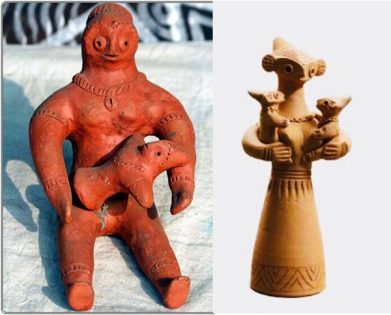 These terracotta clay figurines can certainly corroborate that the people from Indus-Sarasvati Civilization (Indus Valley Civilisation) may have migrated to far eastern part of India in search of a similar environment, when for some mysterious reason their habitat was getting hostile. The many mighty rivers of Bengal and the North East with abundant clay beds could have attracted these people from such a super advanced Civilization to settle down and pass the tradition of terracotta clay figurines. Even though the humans depicted in this art format looks completely different from normal humans!!

What matters most is that even after 6000 years, the far Eastern India have a connect with one of the most ancient advanced Civilization. We cannot call the Indus-Sarasvati Civilization a lost Civilization anymore. Thanks to “Mother Goddess”!!