AneDonyi: The Goddess of Millennia-old Indigenous Culture of Northeast 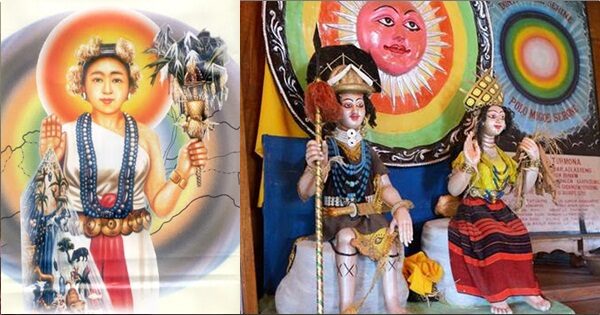 The verdant, sumptuous valleys of Dibang croon Her name. She is the verve of the Kameng, and the embellished esse of the gentle Patkai. She is the heavenly ocean of eternal consciousness, who cradles this wholesome Universe in her delicate, loving lap. Since time immemorial, She has silently looked after Her little children and blessed them with the fructuous love and warmth of her smile.The endearing chill in the winds of the sun-kissed land is Her playful tease.

She is the eye of the Absolute Sedi. And they call Her AneDonyi.

The humble folk of the easternmost child of Bharat Maa, those born of the saccharine soil of the land enshrined with the sacred peaks where Sati Sadhani once ruled, worship her with great reverence and devotion, and She is the very spirit of their being. Tani, the sanctimonious language in which the loving Gods are invoked, adores Her as the empyrean mother of the people of the valleys and the hills. Through immaculate, divinely joyous celebrations and festivities of the harsh but endearing life in the lovingly rugged, wild landscape of their home, She, alongside many other beloved deities of the Indigenous Sanatani pantheon, is worshipped with the inestimable tenderness which signifies the unbreakable bond Her children share with Her. 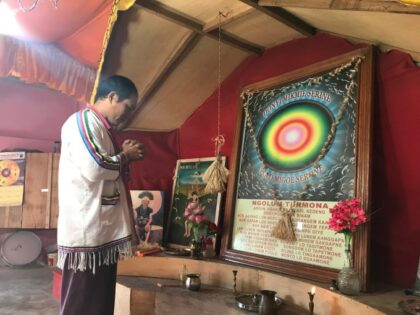 Every Tagin child, youth, and elder, celebrates Her every passing year in the course spell of early January, when the Mother plays with her babies by throwing a winsome tantrum by withholding Her precious warmth, right before she showers them with Her divine embrace in beguiling summertime.

The children of the blessed earth have many names; some call themselves Adi, some Lhoba, some Apatani, and some Mishing. The Nyishi and Galo are the sacred offsprings as well.

The Sedi lives and laughs in a realm both known and unknown, Her children say. The Galos call the magnificent one – the Jimi. The nonchalant sigh of the Absolute Sedi is the genesis of the entire Universe. Sedi transcends the countless limitations of every dimension, like the Brahman, and is sometimes loved as androgenous, and is sometimes epicene. His hair birth the viridescent trees and the plants, his tears the oceans and the consecrated droplets of rain, his bones the rocks and the stones, and his eyes, become Maa Donyi, and Pitra Polo. ‘Ane’, the loving Tani word too, adores Donyi as ‘Mother’. And the word ‘Donyi’, meaning the sempiternal sun. 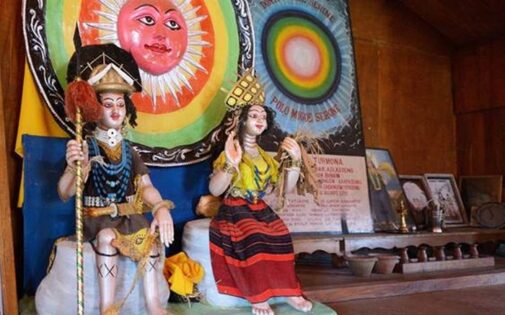 And there comes AneDonyi; the one who mothered the sun.

AneDonyi is the beatific consort of Abo Polo – Father Moon. Both are ultimate, eternal balance of the Cosmos, and both uphold the empyrean order of the same, the Rtam, as our ancient Vedas say. Mother Donyi is the beloved of the sacred Truth, and She is its guardian. The embodiment of selfnessness, conscientiousness, and sacred enlightenment, Maa Donyi is the endower of benevolent consciousness and the simplistic beauty of absolutism. The gentle Goddess, alongside Father Polo, is the manifestation of the Sedi, and She is the wisdom of the immortal feminine. For the Galos, She evinced from the boundless Jimi, that birthed the Melo, the infinite, sapphire sky,and the Sidi, the tender earth. From this dance of the Absolute, Donyi-Polo were awakened, and their hallowed bond treasured the entirety of existence for the eternity to come.

The Tagin dotingly worship their Mother Donyi every year during the merriment of Si-Donyi, where She is given loads of happy, warm eulogies of unblemished submission, alongside Father Si, the simple, earth patriarch. Entitled by Shri. Bingsa Kodak, Pandit Dubi Nigam was the first priest to lead the ceremony, after it witnessed inaugaration in the year 1975 by Shri Tatar Uli, the gentleman behind the conception of deities Si-Donyi, and with the invaluable efforts of Shri TadakDulom and Shri PopakBaghe, who together revived this priceless tradition spanning not just centuries, but millennia. The wise Nibu starts the Ul, the sacral prayer to the deities, to humbly beseech prosperity for the dear folk, for the blessings for the crops and a good harvest, and to keep all malevolence and wrongfulness at bay. Mother Donyi is served adorable offering of the pristine dances of Chungne, KonyiBokar, Riabu and TakarGhene, in the beautifully polychromatic attires of the folk, and the older men then perform the HoyiPenam to welcome the loving Gods and Goddesses. Laboriously a platform, Sehtu, is created with bamboo stuffs- Nyuge- and leaves, where the unsuspecting gayal is sacrificed. In the spirit of delirious gratification, rice beer and rice powder are ornamented on the celebrators’ faces. The divine merrymaking then goes on for weeks. 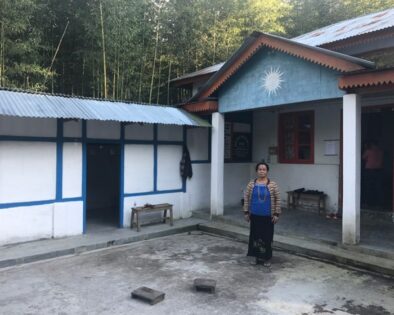 Shri TalumRukbo, the selfless cultural revolutionary of the land where Mother Donyi arrives first, described his Maa as the fathomless force who birthed the Bomong, or the physical sun, and the Baba Polo being the sacramental energy which fathered the physical moon, or the Boo. He calls his Ane to be the ultimate centralizer of the wholesome entity of being, who has unveiled Herself from nothingness, from Keyum.

In the sixth decade of the 1900s, when Christian conversion was at an all time high in the state, Shri Rukbo, among others, was the one who took up the initiative to officialise the cherished Indigenous tradition of the berg-abundant land as a last straw to save their precious Mother from being forgotten forever. Hence, under his praiseworthy leadership and magnanimous service to his loveable culture, alongside the immense support and encouragement he received from the Rashtriya Swayamsevak Sangh, finally in 1986 three organisations were established for the purpose of safeguarding the Ane who had safeguarded them for thousands of years, and one of them was the Donyi Polo YelamKebang, on the 31st of December, a day still treasured as Donyi-Polo Day.

To understand the profound, sagacious philosophies of Maa Donyi, and even Baba Polo, one must approach them naïve, dualistic psychological framework that we usually misinterpret even the ancient Chinese Yin-Yang as. Just like Yin-Yang, Donyi and Polo don’t represent the positive and the negative respectively. They do not constitute the contradictory stances of morality and scrupulousness, rather subtly exhibit the divine properties of the vastness and the dynamism of the cosmic, omni-physical and supernatural Absolute. They represent the inseparable union of androgyny, and the limitless essence wielded by the same, which is ultimate and unquantifiable. The two are complementary, not contrary to one another. This nature of psycho-spiritual ruminations is observable in all Indigenous Naturalist Polytheistic societies, where multiplicity was a sublime synonym for sacred unity. However, the Abrahamised minds of the present age often fail to perceive it properly and completely. 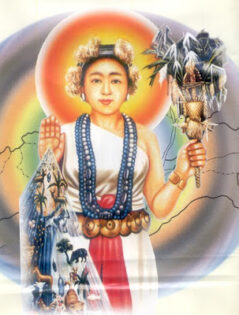 But times have changed now. The children of Mother Donyi will not tolerate any attempt to desecrate their heritage in any which way. Recently, a Christian Pastor set off a furore in the state and rather nation-wide for burning down a statue of AneDonyi and vulgarly disparaging Her and the other deities for being demonic and “the power of the enemy”, all in the name of the Lord and Saviour. This led to a massive uproar and a police complaint was lodged against the perpetrators, after which the Christian group was compelled to apologise. Several such incidents continue to take place in the region, which try their level best to completely demolish the Indigenous Indic identity of the natives and shove the Doctrine down their throats, however the Indic people are resisting. Strongly.  Like they have always.

The state government which belongs to the Saffron Party has made it its forefront objective to protect and revive this millennia-old beloved culture, and to halt those who wish to see it get destroyed.

Tucked away in the quiet village of Hong, in the Lower Subansiri district, meditates a modest little Donyi Polo temple, a Gangging. A picture of the traditional religious iconography of the ancient legacy of Maa Donyi stands still and tranquil, and placed lovingly in front of it are the photo-frames of Shri TalumRukbo, and Shri Ramakant Keshav Deshpande, the latter who founded the Vanvasi Kalyan Ashram that sought to protect and revitalize the venerated traditions of the usually forest-dwelling Indigenous Indic people, and one who has done tremendous work with Shri TalumRukbo to institutionalize the bond which Ane’s children share with Her. 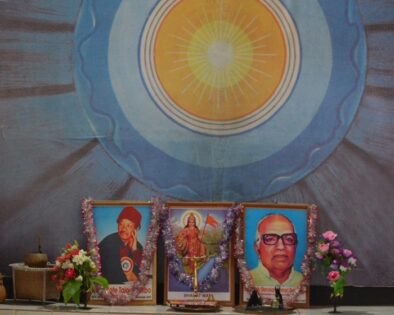 But what the most heart-warming thing to see, was how the images of Rukboji and Deshpandeji, humbly, and protectively flank the third image which is placed right in the centre; the image of a certain someone which makes every Sanatani’s soul stir, standing right in front of Maa Donyi, as though it was guarding the fellow Devi’s existence and reminiscence.

And that someone, is Bharat Maa. 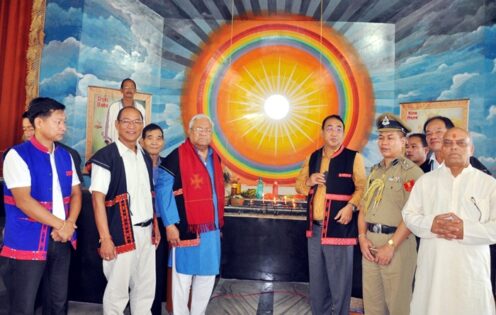 Governor P B Acharya on his visit to the Golgii Bote Donyi Polo Ganggiing, near Jawaharlal Nehru State Museum, Itanagar and joined the Adi community in paying obeisance at the Donyi Polo altar and distributed fruits in the weekly prayer meeting.