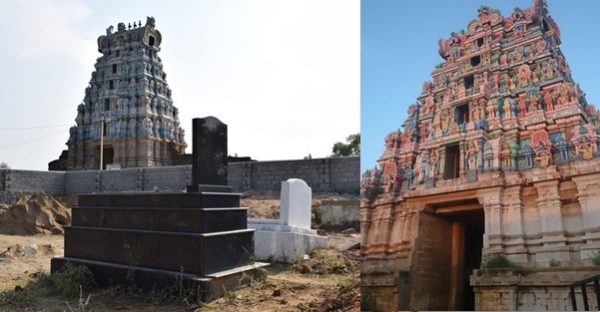 This glorious land of Tamil Nadu is known in History from Ramayana days. Lord Rama (Maryatha Purushotham) went through the length and breadth of this present day Tamil Nadu. Enough documents and evidences have proved time and again that present day Tamil Nadu has had large temple complexes including famous Tanjore Temple among the many.

In our Dharma it is said that if we visit Kashi we get Mukhti but if someone even THINK of the HOLY ARUNACHALA HILL they get Mukthi. Here again this ancient saying proves the deep penetration of DHARMA and TEMPLE TRADITION which was followed in this land for millenniums.

Thirunelveli is one of the ancient places in Tamil Nadu which was predominantly ruled by the Pandya Kings. Huge temple structures were built here as well. Few of them are still maintained; however, most of them are damaged. There are many famous temples around this place even now.

The Manimoortheeswara Uchistha Ganpaty Temple in Thirunelveli is under attack. This rare temple with 5 tier Rajagopuram is massive in size with huge compound walls. It is over 1000 years old. It is located few km away from Bus Stand. The speciality of this temple is that the deity Uchistha Ganpaty is a very powerful Tantric Deity and this temple is one of its kind in BHARAT. This temple is managed and maintained by “HINDU RELIGIOUS & CHARITABLE ENDOWNMENTS” HR&CE department of the Government of Tamil Nadu.

Properties of the Manimoortheeswara Uchistha Ganpaty Temple in Thirunelveli are huge. However, in 1985 the temple lands were given illegally by VAO (Village Administrative Officer) & Revenue Inspector to CHRISTIAN MISSIONARIES. There were protests in the village for many years against this. But the protests were suppressed by the MISSIONARIES. The villagers, especially an OLD MAN started the protest all over again through LEGAL MEANS.

The legal case went on for many years and the OLD MAN passed away in due course of time. In between, the construction of CHRISTIAN BURIAL GROUND started.

Based on HHLTN Legal team’s analysis. HR&CE which controls the temple cannot give Temple land to any other Religious Faith. Even so they cannot let a BURIAL GROUND to be constructed in the vicinity of a very famous GANESH TEMPLE.

Hinduhelp Line Tamil Nadu (HHL TN) took up the issue recently along with Vishwa Hindu Parishad (VHP) and other HINDU ORGANISATIONS. We created a massive Social Media Campaign to spread AWARENESS. We have also revived the protest in these locations. Our Legal team will launch a complaint with competent authorities concerned related to this issue.

We seek support from all HINDU Organisations to further demand sacking of the current officers in charge of various departments within this jurisdiction.

“AYODHYA RAM TEMPLE IS VERY IMPORTANT BUT WE HAVE ENOUGH AYODHYAs IN OUR NEIGHBOURHOOD. CHECK AND HAND IT OVER TO THE NEXT GENERATION”

This article by Tamil Hindu was first published in thirunelvelihhl.blogspot.in