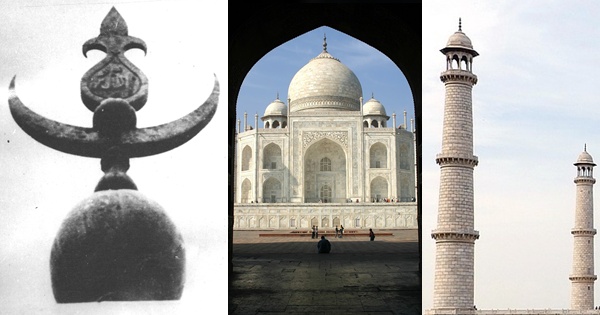 The controversy surrounding Taj Mahal isn’t yet solved though there have been numerous proofs to justify that it was a Hindu structure. Evidences have been hidden by the so called modern historians who followed their masters for petty positions and power. Even documents left behind by the Mughals such as Badshahnama (by Abdul Hamid Lahori, a traveller and historian during the period of Shah Jahan who later became his court historian) validate this point. Many of their own historians praised their own conquests and murders of innocent Hindus!

Shri P.N. Oak, an ex-soldier of Netaji Subhash Chandra Bose’s INA, had presented many evidences which were rejected by so called historians as they could not allow such truth to be published.

Besides the many evidences, the following five architectural evidences suggest that Taj Mahal is a Hindu structure:

1. Well known authorities on architecture from the West such as Ernest Binfield Havell, Mrs. Kenoyer and Sir W.W. Hunter have written, based on their research, that the Taj Mahal is built in the Hindu temple style. Havell, who was an English arts administrator, art historian and author of numerous books about Indian art and architecture wrote that the ground plan of the ancient Hindu Chandi Seva Temple in Java is identical with that of the Taj Mahal.

2. A central dome with cupolas at its four corners is a universal feature of Hindu temples.

3. The four marble pillars at the plinth corners are of the Hindu style. They are used as lamp towers during night and watch towers during the day. Such towers serve to demarcate the holy precincts. Hindu wedding altars and the altar set up for God Satyanarayan worship have pillars raised at the four corners.

4. The octagonal shape of the Taj Mahal has a special Hindu significance because Hindus alone have special names for the eight directions, and celestial guards assigned to them. The pinnacle points to the heaven while the foundation signifies to the nether world. Hindu forts, cities, palaces and temples generally have an octagonal layout or some octagonal features so that together with the pinnacle and the foundation they cover all the ten directions in which the king or God holds sway, according to Hindu belief.

5. The Taj Mahal has a trident pinnacle over the dome. A full scale of the trident pinnacle is inlaid in the red stone courtyard to the east of the Taj Mahal.  The central shaft of the trident depicts a Kalash (sacred pot) holding two bent mango leaves and a coconut. This is a sacred Hindu motif. Identical pinnacles have been seen over Hindu and Buddhist temples in the Himalayan region.

Tridents are also depicted against a red lotus background at the apex of the stately marble arched entrances on all four sides of the Taj. People fondly but mistakenly believed all these centuries that the Taj pinnacle depicts a Islamic crescent and star was a lighting conductor installed by the British rulers in India.

Contrarily, the pinnacle is a marvel of Hindu metallurgy since the pinnacle made of non rusting alloy, is also perhaps a lightning deflector. That the pinnacle of the replica is drawn in the eastern courtyard is significant because the east is of special importance to the Hindus, as the direction in which the sun rises. The pinnacle on the dome has the word `Allah’ on it after capture. The pinnacle figure on the ground does not have the word Allah.