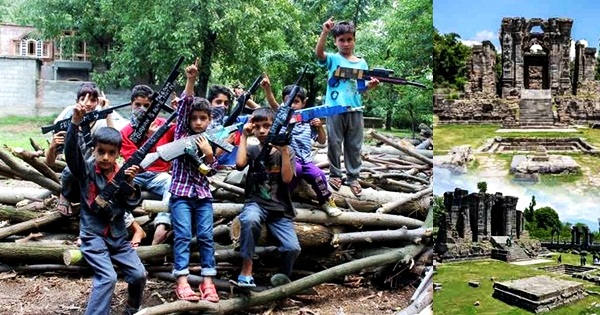 This is PART I in the series….

The Kashmir valley has turned green. This is what I notice as I come out of the Srinagar airport and drive to my hotel. This is another green, the green of Islam that seems to have taken roots everywhere. As my car passes by Dal Lake, I see some men sitting with a banner that says ‘Are all religions the same?’ Sitting next are men with booklets in their hands on why Islam is the best religion. The men stare at everyone who passes by. Just a few feet away is a police vehicle. The message is stark and clear. Islam has been anointed as the religion of the valley.

I am here on a visit with a group, all Kashmiri Hindus. For them it is like a pilgrimage to a land which was once their home. Now they can come here only as tourists.

Thirty years have passed since the last Kashmiri Hindus were driven out from the valley after hearing the mosque loudspeakers blare ‘Kashir banavo Pakistan battav rustoi battnein sann’ (We will make Kashmir into Pakistan without Hindu men but with their women). Since then time has stood still for half a million Kashmiri Hindus. Why then do they come back and visit their deserted homes? Is it to search for their roots or to know if the people who drove them away feel any remorse?

This journey, I believe, may provide me with some answers.

It seems that Kashmiris have become angrier than before. Everybody seems to shout. My driver screams on the phone as I fail to locate him. He thinks he has given me perfect instructions and is irritated as to why I do not understand. When I point out the anomaly, he sulks and is ready to desert me. As we drive on I notice an army petrol outside stopping and checking the cars. My driver refuses to stop when waved at by an army man. After it happens a second time I ask him to stop.

As we do an army man asks us why we didn’t stop earlier. My driver tells him that he didn’t see. The man tells us not to do it again and lets us go. After some distance, my driver abuses the army saying it is they who are the ‘Terrorists’ in the valley. “I don’t want to stop when they ask me to. All drivers feel the same,” he says. “The army does encounters of young children and kills them,” he adds and spits. “Today is India – Pakistan cricket match. Every Kashmiri is praying for the victory of Pakistan,” he tells me before leaving.

One thing that strikes me during this trip is the behavior of the drivers I meet. Almost every driver talks in the same language of the atrocities by the Indian army on Kashmiris. Have they been coached to do so and asked to spread a narrative? As I talk to other tourists at the hotel, I discover we all had the same experience.

None of the drivers it seems want to go with us on a trip to Hindu temples. When we ask one to take us to the temple on Hari Parbat he denies the existence of any such temple. He says there is only a fort now occupied by the army. When we show him there is a temple, he feigns surprise. None of them say they know Kheer Bhavani temple, Martand temple, Martand ruins, Zeethiyar temple or even Roop Bhavani temple. Are they lying to us and pretending they don’t know? I wish I could understand.

We collect to go to a popular picnic spot. I notice a toy shop next to the food stall. It displays fancy toy guns. The shopkeeper tells me he sells around ten guns in a day. “Local children are my regular customers. They buy it to play fighting the Indian army,” he answers and tells me on the day of the funeral of Burhan Wani, he sold a hundred guns in a single day. “That was a record,” he says. “The children in Kashmir become adults by throwing their first stone and holding a gun.”

Why is a race scripting its children in violence? I feel a sense of unease as I see two boys come with their father and pick up a toy Kalashnikov. The father buys two of them. I imagine them, a few years from now, gun in hand trying to kill. Will that day too more guns will be sold? Who will stop this cycle of violence?

Burhan Wani was a terrorist who lived by the gun and openly talked of killing non-Muslims. Why and how did such a person become an icon, a cult figure? Who made him so?

I am also beginning to get puzzled by this bravado that I see. From interviews, personal interactions, I had known Kashmiri Muslims to be shy, demure and withdrawn. This kind of bravado is strange.

We go inside and sit at a corner of the garden by the flowing stream. Families are having lunch. A fruit seller comes and my wife answers her in Kashmiri. I see the woman in the next group look at us. She invites us for food. “This is an old Kashmiri custom,” my wife tells me explaining that when you see someone not carrying food you invite them. I politely decline but the woman comes and wants to know how my wife speaks Kashmiri. When she tells her she is a Kashmiri and I am a Bengali, she narrows her eyes. We walk away and feel her eyes staring at us.

We stop at Roop Bhavani temple. I notice a board saying Farooq Abdullah from the Chief Minister’s fund restored this temple. It is not hard to understand why. It is next to a tourist spot. What is not fathomable is what he restored. The temple is so small that it defies explanation of why it needed a Chief Minister’s fund.

We decide to go to the ancestral home of a friend. The driver on discovering we are a group of Kashmiri Hindus gets uncomfortable. He asks personal and probing questions. He wanted to know how long ago we left and if we have plans to come back.

“Why visit it? What is left?” someone distracts my friend as we approach the home.

“Maybe this is my last visit,” my friend answers and adds…