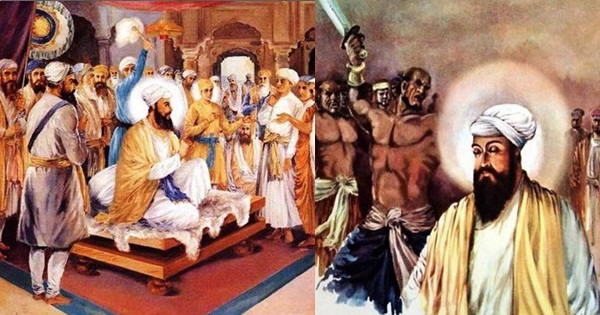 The following Chapter from my book The Infidel Next Door is my tribute to Guru Teg Bahadur.

I wrote this chapter after having heard this story from a Sikh grand father telling this to children in the most unlikely place in a refugee camp for Kashmiri Hindus. Sitting in a small room the way he said it evoked in me a multitude of feelings and I can only imagine when the event actually took place how much momentous it would have been, one that transformed history.

The words in this chapter flowed out of me as if from an unknown source as a I tried to imagine the Guru standing up and confronting Aurungzeb while sitting in Gurudwara Sisganj. The presence of the Guru can be felt everywhere in that place.

I read this chapter at the very same spot where 500 Kashmiri Hindus led by Pandit Kripa Ram went to ask the Guru for protection from being annihilated.

“How many times will you listen to the same story?” Gurudev shook his head and smiled. “I promise this is the last time.” He looked at Aditya. The longing gaze on his face and the locks of hair that fell by the side of his face together added to an expression that made it impossible for him to say no. With a sigh, he asked, “There are so many other stories, but you don’t want to hear them.” “I like it, that’s all.”

Gurudev began. “Over three hundred years ago, our country was ruled by a cruel emperor called Aurangzeb. He killed his own brother Dara Shikoh, imprisoned his father Shahjehan, and became the emperor. Then he decided to convert India into an Islamic country.”

“Because he thought that if other countries could become Islamic, why not India where he, a Muslim, ruled? He imposed heavy taxes on Hindus called jajiya and enforced humiliating conditions so Hindus would give up their religion. He ordered his officers to bring one mound of janeyu in weight every day by killing or converting Hindus. Many Hindus were killed, and many gave in due to fear.”

“No. Aurangzeb’s cruelty frightened many, as he destroyed Hindu temples all over India. Wherever his armies went, they would build mosques over them. It is said that his armies would throw the deities under the stairs of the mosque so people would trample on them.”

“Did it break the will of Hindus?” Aditya asked.

“No. A large number of Hindus chose death over conversion, and Aurangzeb faced a dilemma. If Hindus chose to die, who would he rule over? He decided to try and convert all the pandits of Kashmir first.”

“Because Kashmir was the seat of Hinduism, and his belief was that if Kashmir could be converted, the rest of India would follow. He ordered his Governor in Kashmir that all the pandits of Kashmir be converted to Islam or be put to death. Hearing this, Pandit Kripa Ram, a prominent Kashmiri Pandit, along with a delegation of five hundred pandits, went to Guru Teg Bahadur, the ninth guru of the Sikhs, at Anandpur Sahib in Punjab.”

“Why did they go to Guru Teg Bahadur?”

“Because Guru Teg Bahadur was known as the protector of the weak. When the guru heard about their suffering, he felt disturbed. He said that a sacrifice was necessary to teach Aurangzeb a lesson. His son Guru Gobind Singh, who was only ten, heard him and said, ‘Who else but you can do that sacrifice.’”

“He was my age and could say that to his own father?” Aditya said, widening his eyes.

“The guru told them to return and tell their governor, Iftikar Khan, that he should send this message to Aurangzeb—‘If you can convert the guru to Islam, then the whole of India will convert after him. But if you can’t, you would have to give up your dream of making India an Islamic country.’ On hearing this, Aurangzeb felt that his battle was won. Converting a single person would not be any problem. His name would be written in golden letters as the one who made India Islamic. First the guru and his disciples were brought in front of the Qazi, who threatened him with dire consequences if he didn’t embrace Islam. The guru listened to him with amusement and refused. Then the guru was brought in the emperor’s court in chains. His presence brightened the royal court, making all the jewels look pale. Even though he stood on the ground, he appeared higher than the emperor, who sat above him on the throne. The guru looked majestic with his flowing beard, his eyes so powerful they could see through your soul. Aurangzeb couldn’t look him in the eye. ‘Teg Bahadur, you came here to embrace Islam,’ one of the emperor’s courtiers finally said to him.'”

“‘No, I didn’t,’ the guru thundered. ‘I said if you can convert me to Islam, then the whole of India will follow me, and if you can’t, you will give up your dream. Let’s see if you, Aurangzeb, have the power to do that today. I dare you to convert me. If you fail, you will stop the forced conversions of Hindus and the desecration of their temples.”

The silence was deafening.

“‘Do you know whom you are talking to?’ one of the courtiers said, who finally found his voice. ‘If you embrace Islam, the emperor promises to give you a high post at this royal court, and you will be given many jewels and have the biggest harem in his kingdom.’”

“The guru laughed. The pillars in the hall seemed to shake with his laughter. His laughter was like a lion’s roar. When Aurangzeb looked around, he saw his whole royal court sitting there frozen. ‘You fool,’ the guru thundered. ‘You think you can lure me in the name of God, the Almighty? You think if I call Him by another name, saying that is the only right path, then I acknowledge my path is wrong? Who led you to come to this mistaken conclusion?’”

“How could the guru speak like this to the emperor?” Aditya asked.

“Those who stand up for others and are the embodiment of dharma develop such a quality.”

“And he called the emperor a fool in front of everyone.” Aditya laughed.

“Aurangzeb sat unable to utter a word. ‘History will not forget this day,’ his courtiers thought when the emperor of India looked so pathetic in front of an obscure guru. The guru continued. ‘God is one. Whatever name you call him, he is the same. Our paths take us to the same destination. We can call him by whatever name but need to do so without pride, conceit, or deceit, and you, Aurangzeb, are full of all three.’”

“Why did the emperor remain so mute, unable to say anything?” Aditya asked.

“Proud men lose their tongue when confronted by someone who speaks the truth,” said Gurudev. “The emperor said, ‘Can you show me a miracle to show that you are a holy man?’” “‘No, I will not do something foolish to convince you, Aurangzeb.’”

“‘Then this is the last time I ask you. Will you convert or not?’”

“The emperor had never felt so humiliated. Tomorrow the whole of India would know how the guru had refused his offer. Not only would his subjects laugh at him but also future generations. He spoke, ‘You fool, you stand in front of me in chains. I can put you to death before you can blink an eye.’”

“Yes, you can, Aurangzeb. You can kill my body but not the spirit of my people. I have never seen someone more pathetic than you, Aurangzeb. You, the emperor of India, is acting like a beggar, begging me in front of your whole court.”

“Take him away. Torture him for forty days until he repents. If he does not, behead him so that only one drop of blood drips at a time,” Aurangzeb screamed. “Then take the head of the guru around town so that everyone can see.”

“The guru laughed. ‘Who lost today, Aurangzeb? With all your might, you couldn’t convert a single unarmed man.’”

“After several days, the guru was beheaded, and his head paraded around the town. Finally some of his disciples managed to take away his body and perform the last rites. Today the place where he was beheaded is called Gurudwara Sisganj, in Delhi.”

“It would be wonderful to sit at the feet of such a master for a day,” Aditya said, his eyes moist.

“Today, the world remembers the guru as the hind ki chadar. There is no other example in history where a prophet gave his life to protect the people of another religion. The legend is that to avenge his humiliation, Aurangzeb wanted all Kashmiri pandits to be killed unless they convert to Islam.”

“Gurudev, each time I hear this story, I try to imagine what is Kashmir like.”

“Oh Kashmir! There is no place like that on earth. Surrounded by snow-covered mountains, it has beautiful forests, rivers, and lakes, sitting by which you feel transported to another world. Hinduism reached its zenith here thousands of years ago. Saints came from far to meditate in its caves and wrote manuscripts on Hindu philosophy.”

“Did you ever go to Kashmir?”

“Yes, I meditated in a cave near Amarnath. It was surrounded by snow all through the year. Then I came to this temple.”

As Aditya got up to leave, he asked, “Gurudev, may I ask you a question?”

“The guru was against all hatred, wasn’t he?”

“Yes, he opposed hatred in the name of religion.”

“Why do people hate?”

“Hatred is never born in a day. It lives for many years in the human heart before it develops a face.”

“Can I try and become fearless like the guru?”

“Yes. If you follow the path of dharma and never hurt any being, even an ant.”