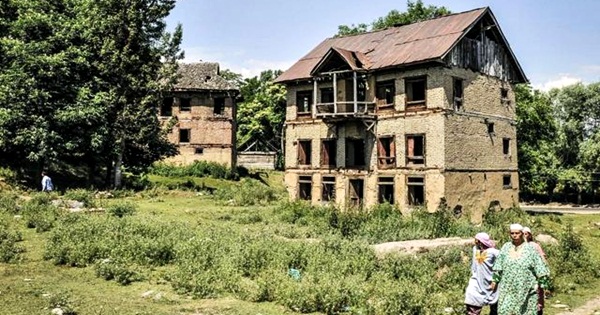 “Why is it that a Kashmiri Hindu never asks questions from his Kashmiri Muslim neighbor who drove him out of his home? Why don’t we ever ask what made him shout the slogans ‘convert or leave or die’ and ‘leave your women behind to create Pakistan’ from his mosques?”

“Your neighbor alone can answer this question.”

“Because you don’t ask him,” I answered.

I was talking to a Kashmiri Hindu woman, Neha (name changed) who had run away in 1990 on 19th January. Her eyes hid a painful past behind a mature self that she presented.

“This is a question that you need to ask them some day. Someone has to be courageous to do that,” I had added.

“I had visited my old home to find out what happened to my favorite Chinar tree. Did it still stand or was it cut down by my neighbor? I had wanted to write a letter to not just my friend but all Kashmiri neighbors of a Hindu.” She added saying, “I will do so now.”

This is her letter. It is a powerful indictment of evil in human nature and how it hides as banal as pointed by Hannah Arendt. Rubina was the girl she used to play with.

I had gone back to see my home at the insistence of ma, my mother. She wanted me to see it one last time before she died. She died peacefully after seeing it, like many others’ parents I know.

We had been neighbors for generations. Your Abbu jaan used to be friends with my father.

Do respond even if in anger.

The Chinar tree in our backyard separated our homes. I grew up under it. I learnt you cut it down last summer because it is not good to remember the past. But the past is all we have. The memory is all I have today.

Ammi jaan recognized my mother. They hugged and wept. They asked me to do the same. I couldn’t. It all felt unreal. Ahmed baijaan and your father wiped their eyes saying how much I have grown up. But my eyes remained dry. I felt like a stone. This letter is to say why.

You held my hand as if we were long lost friends. You wanted me to say what happened in my life. If I was married or not. You asked where I lived and then became quiet as your Abbu looked at you sternly. My mind was full of images of the camps. The dirty drains, the single room where a family of seven lives, the daily shortage for food. What was there to say?

“How could it all happen to you?” you all asked my mother. “Who did this to our Kashmir?”

Three things about refugees. They live in fear and dream of going back. Then one day they realize they won’t. No one wants them back.

They also live and die in shame. My father did. He asked for forgiveness before his death because he couldn’t protect us from his neighbors.

Ahmed baijaan, told me the freedom struggle of Kashmiris will continue till self-determination for Kashmir is achieved and then everyone can live happily.

My parents taught me never to raise questions. When I asked them why, they remained silent. I was told we will have to go back one day and live as neighbors. But it will not happen. I know after visiting you. Will you all accept us back if we don’t convert? Please answer.

I grew up hearing the wails of why it happened to us. No one ever asks why our neighbors did this to us? The world accepted your version.

It was Ahmed baijaan who was a teenager then, roaming the streets asking ‘kafirs’ to leave. It was the Imam saab from the local mosque I wished everyday whose voice came over the loudspeaker saying only Hindus who convert will be allowed to remain.

But your parents, you, all of you never protested and remained silent. So why ask today who did it?

Does Ahmed baijaan ever think before the right for self-determination comes the right to self-definition? For not a few but for all. The self-definition of who is a Kashmiri? Are those, who have lived here for thousands of years, have less rights than those claiming the land for themselves?

Kashmiri Muslims tell the whole world about atrocities on them. You have powerful writers telling these stories. But you don’t write to us, your brothers? You tell the world about the injustices done to you but not about us, why?

Will any Kashmiri Muslim explain to the Kashmiri Hindu, why my father had to bundle up his children and run away in the middle of the night to save his daughter from getting raped? Will he explain about the people who were killed and whose bodies lay on the roads for being Hindu?

Will he say why the men, the ordinary Kashmiri men, raped us and dragged many only to kill them? Will any Kashmiri Muslim say why the voices of from the mosques asked the Hindu men to leave behind their women?

Will someone answer my questions?

There is a wall that exists between us, a wall of denial, of lies. It can be broken by those who built it. I wonder if someone will ever do it.

Bitter enemies become friends. That is what history tells us. It happens when they have the courage to open. In your eyes you made us the manufactured Indian spies, informers you couldn’t trust. To us you were the one who called us ‘kafirs’ and said we have no right to live next to you.

Will you acknowledge our right to be, to exist, to have our religion and live amongst you?

Do you claim the Kashmir valley on religious identity alone?

Will you challenge the stories that you said to the world and include a story that includes us?

Would you acknowledge the violence you have inflicted upon us?

Would you forfeit the narrative that you have pedaled before the world as false?

Would you acknowledge that I am a Kashmiri Hindu because of my history?

Would you acknowledge that Kashmir is a land of ancient faiths that existed much before Islam came and they have a history?

There is a last question. Nowhere during my visit did I find any of you condemning the violence that happened on us. No one has spoken or written about our sorrow, our suffering though voices from your side have been written. It appears as if our sorrow and suffering never existed. It is as if one fine day, the Kashmiri Hindus just vanished from Kashmir of their own free will.

Was then our seventh exodus a final solution to create an Islamic Kashmir?