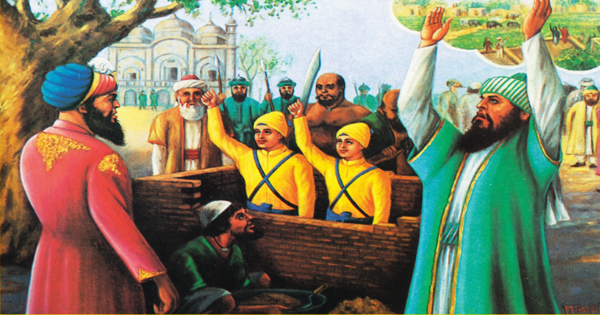 Among Guru Gobind Singh’s four sons, two of the eldest, aged 13 and 17, were martyred at the Battle of Chamkaur in December 1704 against the Mughal army. His younger sons Baba Zoravar Singh (9 years old) and Baba Fateh Singh (6 years old) were captured by Wazir Khan, the Muslim governor (Nawab) of Sirhind under Mughals. Wazir Khan executed the young sons by burying them alive into a wall after they refused to convert to Islam. Here is an account of how the young children of the 10th Sikh Guru bravely defended their faith and accepted martyrdom. It was 26th December 1705.

The Nawab ordered them to be confined to a tower. They had to pass the cold December night lying on the bare and hard floor. The next day they were parted from their grandmother Mata Gujri and were taken to Wazir Khan’s court.

A courtier of the Nawab advised the little princes to bow down before the Nawab.

“No,” said Baba Zorawar Singh, the elder of the two, “we have been taught to bow down to none other than God and the Guru. We will not bow down before the Nawab.”

The bold and unexpected reply astonished everybody including the Nawab.

He said to the children, “Your two elder brothers have already been killed in the battle of Chamkaur. Your father is killed too. They were infidels and so they deserved the fate, but you are much more lucky. Good luck had brought you to an Islamic Darbar. Embrace Islam now and become one of us. You will be given Wealth, Rank and Honour and you will have the opportunity to live good lives. You will be honoured by the Mughal Emperor himself. But if you say No to my offer you will be treated as infidels, and will be put to death!”

Baba Zorawar Singh looked at his younger brother and whispered, “My brother, the time to sacrifice our lives have arrived. What do you think we should reply?”

Baba Fateh Singh who was just six years old replied, “Dear brother, our grandfather Guru Teg Bahadur parted with his head. He stoutly refused to part with his religion! We should follow his example. We have received the baptism of the spirit and the sword! We are the Guru’s lions! Why should we fear death? It’s best that we should give our lives for the sake of our religion!”

Baba Zorawar Singh raised his voice, “You say that our father has been killed, but that’s a lie! He is alive and have yet to do a good deal of work in this world. He will have to shake your empire at its root! You know that we are his brave sons who at our age sent our father to sacrifice his life at Delhi. We hereby reject your offer of pleasure. It had been the custom of our family to give our life but not to give our faith! Let your swords do their job. We invite you to do the worst you can!”

These words alone were enough to inflame the haughty Nawab.

Sucha Nand, the courtier poured oil into the fire, “If such is their behaviour at this tender age, what will it be when they grow up? They will follow the example of their father and destroy your imperial armies! The offsprings of a cobra should be crushed!”

The Nawab said, “You are true and wise, Sucha Nand, but I want them to embrace Islam. Let us give them sometime to think and consult with their grandmother. We shall try again tomorrow to make them yield.”

Then he said to the two brothers, “I don’t want to act in haste, I will give you some time to think. If you refuse, you will be so much tortured that your cries will be heard far and wide! Then you will be cut into pieces!”

Then he ordered to take them back to the tower where Mata Gujri had been waiting for them. A look at their faces convinced her they stayed firm in their faith and she said a brief prayer of thanks to God. Then she rushed towards them and hugged them lovingly to her bosom. Seating them on her lap she asked them to tell her what had happened.

Baba Zorawar Singh narrated the whole account to his grandmother. Mata Gujri was immensely pleased to hear what her grandsons narrated to her.

She said to them, “You should behave tomorrow in the same way as you did today. Remember your grandfather’s example and his teachings. If they torture you, pray to God for strength and think of your grandfather.”

The next day when they were presented before the Nawab, he gave them the same threats and made the same offer if they embraced Islam. They refused his offer. Sucha Nand again pressed the Nawab to give them capital punishment. But the Nawab decided to give them one more day to think. He still hoped they would yield.

The next day they were taken to the Court for the third time. The Nawab again gave them the same offer but the brave sons of Guru Govind Singh gave the same reply as the previous two occasions.

The Nawab pretended to be kind.

He softened his voice, “I’m still hesitating to give the order for your death. But what would you do if we give back your freedom?”

The brave boys replied, “We would collect soldiers, supply them with weapons of war, then fight against you and put you to death!”

The Nawab asked, “But if you are defeated in the war, what would you do then?”

The boys replied, “We would collect an Army again, then either kill you or get killed ourselves in the war!”

Now the Nawab lost his patience and all his pretension of kindness. He ordered his men to brick the boys alive!

Under the Nawab’s orders, a part of the outer wall of the fort was pulled down and the children were made to stand in the gap thus created. Pathans stood nearby with their swords on the shoulders of the children! The masons were ordered to erect a wall around the children. They were told to take care that the bricks pressed the wall tightly against their bodies!

After each layer was erected, the Qazi urged them to accept Islam, but the boys stood calm and quiet. They were busy reciting Japji Sahib and other hymns of the Guru. When they were buried in the wall up to their shoulders, the Nawab himself came and urged them to accept Islam to save their lives! The boys stood calm and shook their heads. The boys were then martyred.

When the news of their martyrdom reached Mata Gujri she said, “Oh my dear ones, take me with you! Now that you are gone, what am I left to do here? Oh my soul, fly after them to the bosom of the Merciful Father. Oh my dear ones, we shall meet again at our True Home!”