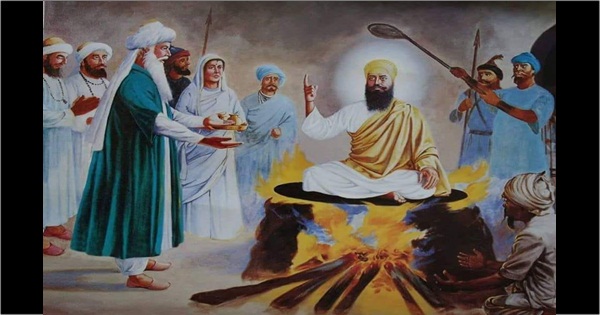 In no history books in India you will be taught that Shri Guru Arjan Dev was forced to sit on a frying pan by the Mughal Badshah Jahangir.

The Mughal emperor Jahangir made Shri Guru Arjan Dev sit on a hot frying pan, then poured oil onto him and cooked him alive! Even today cold sharbat is served on the roads in summer to provide peace to his soul! But the Khalistan supporting traitors and ISI agents are constantly trying to make the Sikh brothers forget the history and as a part of the conspiracy there are constant efforts to erase the facts from history.

Shri Guru Arjan Dev was the fifth Guru of the Sikhs. He sat on the throne in 1581. He was the composer of the Shri Guru Granth Sahib in its present form. He was the son of the greatly revered Fourth Guru Ram Das.

Shri Guru Arjan Dev is also called Shahido ka Sartaj or the crown of martyrs. He was the first martyr of the Sikhs.

The 5th Guru Shri Arjan Dev was born on the 15th of April 1563. He sat on the throne on the 1st of September, 1581 at the age of 18. He sacrificed his life on the 30th of May,1606 at the age of 43. At the time of his martyrdom Delhi was ruled by emperor Jahangir, a product of the Central Asian Mughal dynasty. He was the victim of royal revenge and fury.

After the death of Akbar, his son Salim took the name of Jahangir or ruler of the world and ascended the throne. He had clearly written in gory details in his autobiography Tuzuk-i- Jahangiri how he killed the Guru. He was very unhappy at the rising influence of Guru Shri Arjan Dev. His son Khusrau at the time revolted against him and he took the opportunity and ordered the arrest of the Guru on a false charge of providing assistance to Khusrau.

Previously his great grandfather Babar had imprisoned Shri Guru Nanak Dev on the charge of travelling all around the Country to arouse the Hindus who at the time had lost all hope of a revival. As per Jahangir first his family was taken hostage and placed in charge of Murtaza Khan and his house and properties were looted. So the Guru had to surrender and accept martyrdom. He stayed calm and faced bravely all the tortures he was put into. Before finally putting him to death Jahangir put him up for inhuman tortures! He was first forced to sit on the hot sand the whole of the afternoons of the month of Jaishtha. The Guru accepted all as the rulings of Parmatma. On the 30th of May, 1606 it was a very hot day. On the day he was forced to sit on a hot saucepan as per the “Yasa!”

“Yasa” is the procedure of killing a person without allowing his blood to fall on the ground. Then hot sand was poured on his head. The body of the Guru got fried by the fire lit below the saucepan! Then his body was sent for a washing in the river Ravi. There his sacred body disappeared in the river to avoid further insult and injury. In his last message he asked us to always stay polite, modest and gentle. He in his life never said a single harsh word to anyone.

Even the hot saucepan seemed to cool down before his beautiful nature. The burning sand couldn’t break his determination. The Guru bore each and every torture with a smiling face and performed the following Ardas,

The time passed to the third generation from Jahangir and the sixth from his great grandfather Babar to Aurangzeb. By the time the generation of Guru Nanak Dev reached his tenth generation to Shri Guru Gobind Singh. He was the man who paid them back, He planted the explosive device under the feet of the Mughal empire and wrote the history of their complete and final destruction. With just a handful of brave Khalsas he finally started the process of finishing off with the 700 year old foreign rule forever! The procedure was completed 100 years later under the leadership of Maharaja Ranjit Singh and the Indian Nation breathed freely for sometime before again going under the British rule. The martyrdom of the fifth Guru, Shri Guru Arjan Dev will always shine like the sun in the sky.

Today we have forgotten the torture he was subjected to. We can pay our homage to him but with a great sorrow. The history of such a Godman is never taught to us as a part of a Jihadi conspiracy!

It’s high time to get rid of the children of Macaulay and rewrite our own history. Let our children follow his ideals and be taught about him!