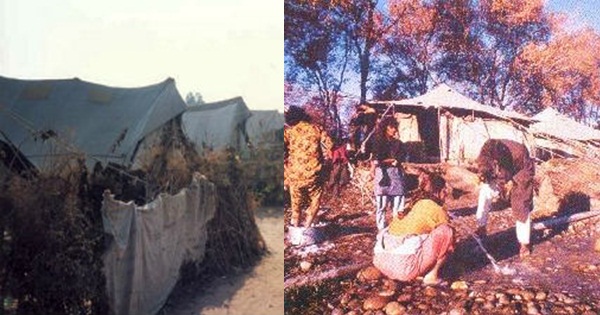 “Which is the worst issue on gender justice that you have come across in your career?” A friend asked me.

“It is perhaps the atrocities on women in the last one thousand years during the invasions and one that continued till the exodus of Kashmiri pandits.”

“You are touching a hornet’s nest,” she said.

“It is always the women who bear the trauma in any war, in genocide, in mass violence. It is the women of India who have faced it the most.”

“Are you saying that the attempt towards the annihilation of Hindu civilization by invaders and the atrocities faced by women is the biggest gender violence of all times in India?”

When I replied yes, she asked, “Then why is it not known? Why don’t women come forward to talk about it?”

“When a woman talks she has to deal with issues of shame and humiliation about herself, her body, and also the men in her life who feel ashamed that they couldn’t protect her.”

“How often you come about it in your work?”

“Working with refugees, it has been a constant reminder. When I was in Sri Lanka, I heard hundreds of women who said they were sexually assaulted in the last stages of the war. The social workers who heard that had felt burnt out. Some years ago I had heard women from Bangladesh talk about Pakistani army men raping their mothers and killing them. While doing a workshop with Afghan independent human rights commission, some of their members had broken down talking about the sexual assault on young girls by the army. One of the counselors was so affected she wished she was dead.”

“Will Durant, one of the few historians with a conscience, has written about the invasion on India as the most brutal in history apart from the numbers. The numbers often hide the real trauma of the people. After a war or genocide, everything becomes a number. The sheer number of people killed or thrown homeless or raped refuse to touch our heart. Perhaps that is why the power of a single story arouses our conscience and emotions that numbers cannot do.”

“I share one such story that I heard in the camps of Kashmir. The eyes of the one who told me still haunt me. It is banal but I can’t forget it because it is a symbol of what happened to a people and ended a way of life. But it tells me the way women and especially Indian women hold trauma in their heart, protecting their families and carry it forward for generations. Often called trans-generational trauma it goes unsung, unnoticed and bites the dust one day. Except that it is my tribute to the woman who told me and to Indian womanhood. They have held our civilization together.”

“The one who told me had held this secret for over sixty years. She told me I could write it after she is gone from this world. But there was a question that I couldn’t answer then. In her words – “It was 1948. Thousands of kabalis were entering Kashmir from Pakistan. Knowing that they were approaching our village, my father decided to go away with our family. He gave us three sisters’ three packets and said, “Take it if you are in trouble or a pathan catches you.” We didn’t have to ask what the packet contained. We knew what was in it. We three nodded silently. I believe every girl in those days knew that once she reaches her teens, a day like this may come anytime in her life. My youngest sister, tried to open and see it after he left. We stopped her. It was considered a bad omen if you opened it before you needed it. Two other girls came from neighborhood we all hid together.”

“I am going to pandit ji’s house,” my father told me. “The men are having a meeting there. Will be back in an hour. Keep hiding in the attic and don’t come out under any circumstances. Only if you hear my voice, do come out.” An hour later we heard Girdhari ji’s voice call for our father. He was a young boy from the neighborhood and we all knew him. Little did we know a pathan had cornered him and made him call the residents by name at knifepoint.”

“As I replied, the pathan caught hold of me and his eyes glowed to see so many girls. He was about to call someone when he looked at me and said, “This one is pretty and I won’t leave her for Sardar.” He began to rape me and I could see he was tired. He was saying he had already raped many that day and it seemed greed had over taken him. As he rolled over and started to pant with eyes closed and took some water, I don’t know what came over me but I grabbed him and emptied the whole packet in his mouth. He gave a loud cry and his body convulsed and he shook violently calling ‘allah allah’. He even called me a prostitute, a haramzaadi (illegitimate) and tried to grab my hair but then collapsed. His mouth became full of foam and his eyes bulged at me. He was no more. My sisters stood there frozen.”

“Would you say I am a murderer?” she asked.

“One of the girls gathered some courage and came forward to say, ‘Benie(sister), we have to hide what he did to you.’ All the girls put a little of their share of poison in my packet and made it look like I didn’t use it. They all took a vow ‘we won’t tell it ever to anyone’.”

“Few hours later my father came and we told him that the pathan had entered, fainted and died.” He believed us and told us to be careful.

“If I hadn’t killed him he would have come back with his Sardar and raped us all.”

“You saved the honor of others and possibly several lives. Was keeping it a secret difficult?”

“Yes. If I did, I would be talked of as a defiled woman and a one who murdered.”

She had then brought out the packet, now yellow and crumpled with age. She had opened it to show a powder now black. “All the other women threw it away long ago. I couldn’t. I kept it as a reminder. I don’t know why. I open it every time I think of that to see and remind myself.”

“Can I include your story in my book?” I asked her.

“No, don’t. You will get many other stories for your book. I want this story to die with me. Write it after I am gone and if ever Article 370 goes away. Many may throw away what they have kept preserved as a symbol of those days.”

“You didn’t tell anyone at all?”

“Only my daughter and my granddaughter. When they grew up. I have felt a defiled woman all my life. I have nightmares. I still wake up perspiring thinking of that night.”

She had stopped here and we had left after giving our number. I wondered how the other women of that group had held the story in their hearts. What was their story?

Sometime ago, I received a message from an unknown source. It was a picture of a packet being dropped in a river. The message said, “You don’t know me but I want to tell you that my mother and I threw a packet in Ganges. My grandmother had left it for us telling us the story and saying she told you. We had found your name and phone number in her belongings. Hope you won’t mind my sending this picture to you. Our family felt we will throw the packet in the Ganges. Mother Ganges will absorb the poison.”

Featured image courtesy (for representation purpose only): ikashmir.net and forumforhinduawakening.org.