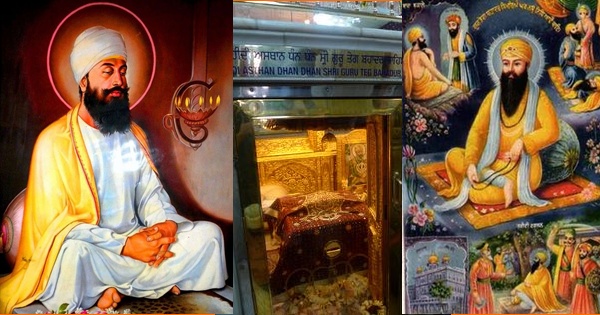 A name immortalized in the History of India for his sacrifice and valor. A Guru, who traveled far and wide throughout India, preaching the teachings of Guru Nanakji! A philosopher, spiritual leader, and a poet, who composed hundreds of hymns! A patriot of Bharat, who resisted the Mughals against forced conversions of Hindus and Sikhs to Islam. A man who attained martyrdom for protecting the Hindus and Sikhs! He was a socio-political challenge to the Mughals of his times. He was Guru Tegh Bahadur, the ninth Guru of the Sikhs.

Do you know Guru Tegh Bahadur was known as Tyaga Mal during his early days? Guru Har Gobind, the sixth Guru of the Sikhs, christened Tyaga Mal as Tegh Bahadur after the latter showed immense courage in the Battle of Kartarpur on April 26, 1635 against the Mughals. He was then only fourteen years old. ‘Tegh Bahadur’ means ‘Mighty of the Sword’.

Born on 1st April, 1621 in a Sodhi family in Amritsar, Guru Tegh Bahadur was the youngest of his six siblings. His father was Guru Hargobind and mother Mata Nanaki. He was married to Mata Gujri at the age of 12. The couple was blessed with a son, Gobind Singh, who later became the tenth Guru of the Sikhs.

There is an interesting story behind the Guruship of Guru Tegh Bahadur. Guru Har Krishan, the eighth Guru of the Sikhs, died without nominating his successor. But he gave a hint that his successor would be from Bakala in Amritsar. Thenceforth, many Sikhs from Bakala claimed Guruship. Meanwhile, a prosperous trader named Baba Makhan Shah Labana fell seriously ill. He offered his prayers to Guru Nanak that if he survived, he would offer 500 gold coins to the ninth Sikh Guru. The ninth Guru had not been proclaimed yet. Baba Makhan Shah Labana, who knew about Guru Har Krishan’s last words, came to Bakala. He offered two gold coins each to every claimant of Guruship that he visited. All of them accepted his offerings and bid him farewell. When he offered the two gold coins to Guru Tegh Bahadur, the latter blessed him but remarked that his offering was considerably short of the promised five hundred gold coins. Makhan Shah Labana declared that he had found his Guru.

It was four months after the death of Guru Har Krishan that Guru Tegh Bahadur was officially proclaimed the ninth Guru of the Sikhs.

Here are 13 facts that you should know about Guru Tegh Bahadur:

1. He was an expert in archery, use of the sword, horsemanship, and the old classics.

2. He showed extreme valor in battlefield against the Mughals at the young age of 14.

3. Guru Tegh Bahadur spent 26 years, 9 months, and 13 days in meditation at Bakala. He gave more time to meditation and little time to family responsibilities during this period.

4. He composed 115 hymns that find mention in Guru Granth Sahib.

5. He defended against forced conversions of Kashmiri Pandits to Islam.

6. He opposed against the Mughal ruler’s forced conversion of Hindus and Sikhs to Islam in northern and north-western India.

7. He was the founder of Anandpur Sahib, a picturesque city abound in Nature’s glory in the district of Rupnagar in Punjab. He bought the site for Rs. 500 from Rani Champa of Bilaspur. Anandpur Sahib is one of the sacred places of the Sikhs.

8. He was the founder of Patiala, currently the fourth largest city of Punjab.

9. He traveled extensively across India. The places he visited, later became sites of Sikh temples.

10. A group of armed bodyguards surrounded him all the while after his Guruship. The reason was execution of Guru Arjan Singh, the fifth Sikh Guru by Mughal Emperor Jahangir.

11. He was publicly beheaded in 1675 in Delhi on Aurangzeb’s orders for defending Hindus and Sikhs against forced conversion to Islam.

13. Gurdwara Rakab Ganj Sahib is the site where the Guru‘s body was cremated.

The post mid-seventeenth century saw increased persecution of Hindus and Sikhs by Mughals in the north-western part of India. Those who converted to Islam were spared. Those who refused to convert were harassed and punished to death. Kashmiri Pandits in Kashmir were the worst hit. Guru Tegh Bahadur visited the Hindus and Sikhs in Kashmir and the entire north-western part of India in 1672 defending them against the forced conversion. His resistance came under the scanner of Aurangzeb, the then Mughal Emperor. Guru Tegh Bahadur was threatened with dire consequences if he did not stop defending non-Muslims. Yet, he continued to defend.

In November 1675, Guru Tegh Bahadur and his associates were imprisoned by Aurangzeb in Delhi. During trial, Aurangzeb offered to spare his life if he converted to Islam. Guru Tegh Bahadur flatly refused and preferred to sacrifice his life rather than giving up his faith. His associates refused to convert too. They attained martyrdom at the hands of the Mughals. While Bhai Mati Das was sawed into pieces, Bhai Dayal Das was thrown into a cauldron of boiling water. Other associates faced similar fate in front of his eyes. Yet he refused to give in. Guru Tegh Bahadur was then beheaded in public on 24 November 1675.

My India My Glory salutes the sacrifice and valor of Guru Tegh Bahadur.