Dogs and British Empire; A Legacy Followed Till This Day 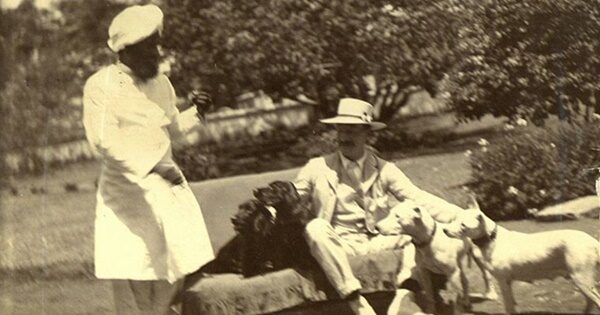 The British saw little difference between dogs and Indians except on one count. It was the degree of loyalty that they exhibited towards them. Loyalty was the supreme value that the white man relished while upholding the flag of colonialism and slavery where the sun never set. The dog was the symbol of undivided loyalty. They were considered loyal, dependable and a constant reminder by the white skin to the native to drive home the point how loyal was he. The meaning was clear. The native should be as loyal as the dog.

The relationship between the dog, the master and the native therefore, was an intimate one in the master’s mind. The dog, especially the hound, was used to terrorize and kill if the native as much as disobeyed the master as numerous records across the empire show. It was also fun for the master to see a cowering native run for life out of fear. The dogs of the white in the British empire were trained to attack only the brown and black skins and not the white. Little doubt then the dog became one of the most powerful symbols and imaginations in British colonial history of racist subjugation across the empire. I will contend it hasn’t stopped for those who think along those lines and hold on to a legacy that is un-paralleled.

In colonial India, boards abounded across the country that said ‘Dogs and Indians not allowed’. The Indians who saw such a board understood it as in their master’s worldview they are hardly better than dogs. The analogy was shameful and humiliating.

The grand old party of India whose adherents claim that they were the only ones to fight for freedom, never as much protested against it. There were no fasts, no resolutions against it, not even a speech condemning it as an affront to the dignity of the natives. Perhaps the analogy escaped their mind and some even thought of it as not applied to them, more for those educated in England, and who were Englishmen by education and brown by accident. Being compared to a dog was for others, the English scale of loyalty for the lesser mortals to measure the devotion of the non-white to the white.

The British equated their relationship to Indians as a master’s relationship to his dog. From the way the present leaders of Congress refer to dogs in their speeches or behave with them, one wonders if the relationship and the symbolism did ever change.

When the British left, the legacy of the dog was left in a vacuum. One couldn’t call Indians dogs directly or put up boards to equate the two in same breath. The transfer of power transferred other things except freedom and autonomy and terms and symbols in the new lexicon continued to be used with a similar meaning but in a different context as before. The purpose was the same, to create the same sense of shame and humiliation that accompanied the native population in earlier era.

Is there any wonder then that the present language as a Congress leader referred to describing dogs in his speech, illustrate the same relationship, the same analogy and the same symbolism linked to an earlier era and the mindset of his party just like it existed for the British? A Freudian slip, one may call it so where the deepest images, symbols remained unchanged and gets passed on. After all it was only a transfer of power and not independence or autonomy? Many years ago another leader of the same party while referring to a criticism of corruption by a member of parliament had replied by saying ‘he can’t answer every barking dog’. Why did the analogy to a dog have to come in? Where was the need? The parliamentarian known for his wit had replied that ‘a dog barks when he sees a thief’.

Another leader from recent times had kept on playing with his dog when an important leader sought time with him to acquaint him and discuss problems about his people. An image reminiscent of colonial behavior of the British a few generations ago, who would behave in a similar manner. What it showed was the British sense of arrogance towards the natives and their issues. ‘Why listen giving him importance? I would rather show that my dog matters’. Where did this arrogance come from if not from a collective consciousness where Englishmen would treat their dogs while listening to Indians?

The recent remark by another tall leader of the party is perhaps an indicator that nothing of that legacy has changed. The pointed reference to a dog reveals a mindset where by referring to the dog and a man in the same breath, the attempt is to bring on a feeling of being lesser, of shame and humiliation.

The British didn’t kill any dog in the freedom struggle. The one they hanged and killed or shot dead were who did not subscribe to the theory of non violence. They tortured and killed those like Bhagat Singh, Khudi Ram Bose or Bagha Jatin and the countless ones who died in 1857 or were from Indian National Army (INA). Can the blow of ‘lathi’ (stick) be compared to the torture chambers of Andaman?

No man who is tortured and abused, can write a book like Discovery of India. A true prison experience doesn’t allow you to think academically. By the same logic if someone is forced to make oil like ‘kohlu ka baail’ and is tortured in a solitary confinement, would he be able to carry on with his beliefs of transformation of enemy through peaceful methods? If someone is truly threatening to the empire, won’t they be sent to Andaman with no amenities? The present generation of Indians are asking that question. For how long can we suppress the truth? Is that why the analogy on dogs is being raised?

The era of comparing Indians to dogs, of talking of dogs and people in the same breath to giving an analogy is long over. It should be condemned as it represents painful part of our history. It also needs to be done as a mark of respect for the men who gave their lives for our country.

Those who give such analogies need to remember that as the dream to get back to power becomes more and more distant, the hidden angst and frustration comes out in language that is discriminatory, abusive and reveals the legacy of the party which the man heading it spoke as and the one which no one condemned.

Indians today are searching for their roots, discovering a new self esteem within themselves. They understand the connotation and analogy with the dog that it represented. Today, it makes them question and reject all symbolism and any language that reeks of humiliation. The Congress of today needs a new identity if it has to stay relevant, different from the colonial baggage of the masters it inherited as gospel and needs to reinvent itself with a new language and symbolism that conveys dignity and not based on humiliating natives.

The new India of today is getting bonded by a new language, a new symbolism where such comparisons and analogies are being thrown out. Any leadership may well realize that to compare and use such words is suicidal and Bharat, not India needs a new language and a new mindset other than what was gifted by the British and carried forward in the transfer of power.

Featured image on dogs and British empire (only for representation purpose) sourced from Wikimedia.