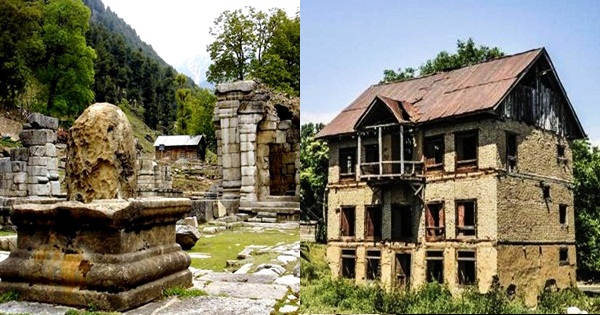 We decide to go to the ancestral home of a friend. The driver on discovering we are a group of Kashmiri Hindus gets uncomfortable. He asks personal and probing questions. He wanted to know how long ago we left and if we have plans to come back.

“Why visit it? What is left?” someone distracts my friend as we approach the home.

“Maybe this is my last visit,” my friend answers and adds that he has visited his home every time he came to Srinagar. “It is one of the few homes surviving,” he tells us and adds, “do you know why? Its wall is attached to a number of Muslim homes. Trying to burn it would have destroyed the entire row.”

As we reach, we find the gate locked. Windows open and curious faces peep out. One old woman recognizes my friend and hugs him. We get invited to her home. One by one, the men and women of the house come and wail. They say we were like brothers and sisters and lived in harmony. Who brought this tragedy upon us? My friend signals us to be silent. After sometime they enquire about his family and if he plans to return. When he says no, there is a silence. Didn’t they know who was responsible for driving out their neighbors thirty years ago? Why did they even ask?

As we find the key and enter the home, there is a heaviness in the air. Things lie topsy turvy and we have to jump over things to move. Broken furniture and old calendars lie strewn. There is even a broken toy of Hanuman. Ever since its last inhabitant left thirty years ago, no one has lived here. My friend caresses the walls, objects and tells us where everything used to be. We follow him to the roof and he tells us the corner from where Shankaracharya temple could be seen. With some stretching of the neck we locate it. At another corner he tells us he used to fly kites and how a prank by him had led to a fire.

Nothing has changed but still everything has changed. His children will hear stories from him and see the picture of the home of their father where he went on the roof and played pranks. And then one day he ran away because his father had to think of the honor of the women of the family. It is a memory that holds the Kashmiri Hindus together after their own nation failed them and will do so in future too.

As we come out, he tells us that his neighbors do this each time. They wail and blame everyone but never talk about who unleashed violence on their hapless neighbors.

The driver meanwhile leaves us at the hotel and tells us to have another driver. Did we offend him by our visit? Or was it that we were Kashmiri Hindus, a reminder of a past he didn’t want to face.

We pass by several deserted temples on the way. Once they rung with the sound of bells. I ask the driver to stop again and go near it. As I look in, a few men join me. One of them asks me what I am doing here. I was about to take a picture but decide against it. Their body language is aggressive and the message is that I go away. Before walking away I notice a cylindrical stone in one corner. Was it a Shivling once, I think before walking away to the car. Everyone is relieved to see me back.

I am aware my driver is watching me. I feel a heaviness that wouldn’t go. I want to ask. This is my country, my religion, my land, my temple and my history. Who destroyed it and why did they get away? Do I have to sneak in to have a look and walk away?

I am reminded of when Babri masjid was demolished. Many intellectuals of India said the secularism in India was lost on that day. But didn’t the same people keep silent on what happened in Kashmir. What would their reaction be to the way I had to walk away?

On our way to Kheer Bhavani temple my daughter shows me a slogan ‘Indian dogs go back’ and ‘Pakistan zindabad’ written next to each other. On another wall it is written ‘ISIS zindabad’. Such slogans have become banal. They don’t elicit any reaction. As we reach the temple we note that it is guarded by the army. The soldier at the gate gives me a register and asks to write my name, address and mobile number. I cannot imagine doing this, having to sign a register to enter a Hindu temple. It seems more like meeting an Indian officer after stating my purpose why I want to meet ‘Sahib’ (officer). Thankfully for me the man doesn’t ask me to write the purpose of why I want to meet ‘God’.

We understand the reason as we enter its premises. After two hundred temples desecrated, the remaining ones need to be preserved as the last vestiges of Hindu religion. Will it soon become a reality in other states too? Will we need to sign and enter temples after stating our name?

As I come back in the comfort of my hotel, a number of questions flood me. Nearly two hundred temples were desecrated from 1987 to 1991. What threat did they pose to the people of the valley? What wealth did these temples possess as the likes of Romilla Thapar and other historians would have me believe as the major reason why Hindu temples were destroyed? The Kashmir pogrom of temples may yet be the biggest pogrom of religious places anywhere in the world that is yet to be acknowledged.

Our houseboat is on Dal Lake. The Shankaracharya temple is just opposite on a hill. It is evening and the sound of bhajans (devotional songs) from the temple can be heard. Soon the mosque nearby starts to blare. It is almost as if it wants to drown the former. As we tell the houseboat owner about the loud noises his look says it all. This is his Kashmir and he is Muslim. He is young, thirty and born at the time when the last of Kashmiri Hindus were forced to flee. Does he wonder why in his land, the street names, mountains have all Hindu names while its residents are Muslims? Will he ever ask his parents or grandparents what happened on the night of 19th January, 1990?

I get to know that there is an active attempt to change the names of the streets, mountain ranges in Kashmir valley so that the future generations don’t have any identity issues. The district Anantnaag is Islamabad, Shankaracharya hill is Takht-i-Suleiman and Hari Parbat is Koh-e-Maran. People use them in personal communication. These are Arabic names which have nothing in common with the land, heritage and history of Kashmir but symbolic of Islamic victory. To erase an old identity and build a new one, one starts first with a new name. What will Kashmir be referred to after fifty years?

Many years ago, I was in Strasbourg, a border town between France and Germany. Strasbourg has exchanged nationalities six times in last century and is the seat of European parliament. Pointing to the street signs, my friend a local, told me that the Germans changed the street names every time they conquered us. But the French changed it back every time after defeating them. Is that why Strasbourg came to be known as soul of France?

“Are you a writer?” the owner asks me. “There was a writer who came here once. He would get up early in the morning and ask for lot of black coffee like you do,” he chuckles and tells me about Arundhati Roy. “She is our voice and speaks for us Kashmiris.” He asks what my profession is. When I tell him I am a psychologist and a writer, he says, “Almost everyone in Kashmir is suffering from either rage or depression. Everyone has a mental disorder. We call ourselves the third AFSPA generation having grown under the shadow of a gun.”

I listen to his rage and ranting, careful that the psychologist in me remains neutral. “It was Arundhati Roy who first openly said Kashmir is not a part of India,” he ends and goes to make food.

“Does he know that in 1990 half a million Kashmiri Hindus were hounded out of the valley by his parent’s generation with mosques blaring slogans against infidels? Does he know that women were raped, men tortured and killed for just being Hindus?” As I am to discover he doesn’t know. He thinks I am misinformed. “The Hindus left on their own,” he says. I ask him will he just leave his home one day to never come back. He doesn’t reply.

I understand he got upset by my questions. He is like other men of his generation who get disturbed when faced with reality. But can I blame him alone? Our intellectuals, writers never projected the truth about Hindu exodus and atrocities in the first place.

“Kashmir is an integral part of India.” The slogan catches my eye as we pass by Badami Bagh,…

Savarkar: How a Nation Failed a Man who Deserved to be Revered