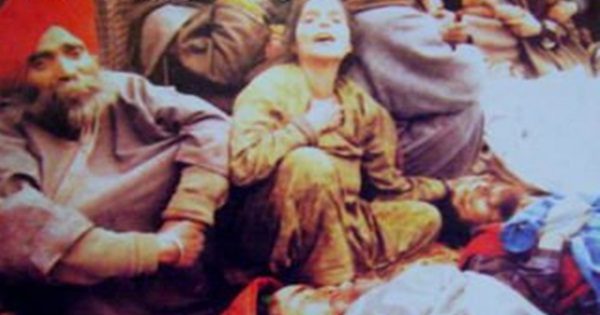 What would it be like for a Jew if a German were to say to him, “We had a little fall out sometime back but let’s forget it and make up.” Or closer home, a Pakistani Hindu father whose daughter was kidnapped, converted and married off to a Muslim man is asked to come and hug the family to make up over a ‘little misunderstanding’.

The above seems to be the idea behind making of the movie ‘Shikara’ by Mr. Chopra when he says that Kashmiri Pandits and Kashmiri Muslims had a ‘little fallout’ and it is time to make up now.

‘Making up’ should be easy. The ball lies in the Kashmiri Pandit’s court now. It is he who has to show his magnanimity by accepting that it was only a ‘little fall out’. Hasn’t the Kashmiri Muslim been waiting with open arms all this while?

A strategy used in school from time immemorial between two fighting children. The teacher here Mr. Chopra has to be obeyed. After all, doesn’t he know the best. And Kashmiri Pandits have been easy to manage so far according to many. A few tears shed here and there and they melt.

Mr. Chopra’s only consolation should be that most of his ilk in Bollywood would share his mindset and empathize with his reasons. Financed by the seculars, the Bhais of the world and now threatened by the rise of Hindu awareness, films have to made, scripts have to be written so that the movie going Hindu doesn’t realize how his ancestors have been treated in history. The word ‘secularism’ fitted the bill very well so far. It is no longer working. So, let’s admit to a ‘little fall out’ here and there that may have happened in the past.

Art, we are reminded has no boundaries. Provided the film is from Bollywood and the theme includes Hindu culture and has scenes between Hindu deities and heroes. There is a formula in it too. The Hindu has to be shown as responsible for his own victimization while other Hindus ridicule, criticize him and an angelic Abrahamic wise man comes to correct him, show him the true path. From ‘Deewar’, ‘Sholay’ or ‘PK’ to the present, it hasn’t failed.

Eighty years ago, the movie ‘Gone with the wind’ showed the world a romantic South of America where beautiful girls of plantation owners danced in white skirts while admiring slaves served lemonades to them. Who would know how horrendous was slavery after that?

Forty years ago, Richard Attenborough, the British director, couldn’t find a single Brown skinned Indian to play Gandhi in his film and settled on Ben Kingsley, the White man. He said he could not find anyone in India who could play the great leader. The message was clear. Gandhi was difficult for an Indian actor to play on screen. When someone asked him how a White man that too a Britisher, could get under the skin of Gandhi, understand what colonialism and its humiliation meant to him, his answer was simple, “It doesn’t make a difference.”

The underlying meaning was simple. The White man being superior can understand the Brown one so well that it is not a problem to enact him. He didn’t answer if the reverse would be true.

In the movie ‘Shikara’, the lead characters have been chosen to be non-Hindus. The Director if asked may give a similar explanation. “What is the problem if non-Hindus enact the role? It is acting after all.” The Kashmiri Pandits would be told and if there is a ‘little fall out’, no pun intended, it can be taken care of easily. The Kashmiri Hindus are riding high with the abrogation of Article 370, the Hindus with Ram Janma Bhumi. They will get over it soon.

To add emphasis, the Director in a choked voice said he made it in Kashmir with Kashmiri Muslims watching and helping him. This transformation of heart by an entire population surely must rank as one of the greatest in history and must be researched upon. Another reason why Kashmiri Hindus must give up their anger?

The movie ‘Gandhi’ was also to hide and preserve the British legend of magnanimity towards natives. Who will remember that they tortured the prisoners of Andaman after they see a Britisher playing the great man himself? Between the slave and the master, the master even if he is ‘ex’ retains the right to tell the story. Macaulay’s vision lives on, undisturbed.

Steven Spielberg was once asked if a German actor could play role of a Jew in a holocaust movie? After a moment’s reflection he had said, “No” and added that though there were German actors who were creative and sensitive, they could never enact a Jew facing the Gas Chamber. “Not only they would need to first experientially feel the terror of the holocaust but for another reason,” he added, “they would never understand what it meant to be a Jew. It would be an injustice to the memory of the generation who were murdered. It would be humiliating for the present generation and not lead to a closure.”

Thinking like this comes hard to Bollywood directors and actors whose loyalty to secular thinkers and Bhais remain supreme. One wonders what does ‘Shikara’ have in common with Kashmiri Hindu Genocide or 19th January 1990? Did all of them run away in Shikaras?

Shikaras represent romance, a way of life far removed from the exodus for Kashmiri Pandits. Shikaras remind us of Shammi Kapoor singing and wooing Sharmila Tagore, a young Kashmiri woman, not the frightened face of a Kashmiri Hindu running for life or trying to protect his daughter. Can we imagine the title ‘Schindler’s List’ replaced with ‘The train journey to Poland by Jews’ or even ‘The leak in the gas chamber’?

Is the purpose of Bollywood movies to humiliate, insult and keep Indians forever in chains? Why did the movie ‘Haidar’ show a dance of the devils at the Martand temple, one of the most sacred temples of Hinduism? Why did ‘PK’ show Lord Shiva running around and mocked and hiding in a bathroom?

In the movie ‘Kedarnath’ it is the golden hearted Muslim hero who helps Hindu pilgrims reach their destination and wins over the lost Hindu girl. The Hindus in the movie are garrulous, fight with each other.

In the movie ‘Shikara’, whether the title or the Director’s explanation why he made the movie or the casting of the characters, all point towards erasing the story of a people. It is time that we tell the creators of such works that they do not represent our side of the story and we will not stay silent.

Betrayals are nothing new for Kashmiri Pandits. Earlier it was crude and done without bothering about any consequences. Today, after their exodus, their humiliation has become more subtle, pregnant with hidden meanings as the stakes grow higher to keep the ‘infidels’ out of Kashmir. The ‘infidels of Kashmir’ were asked to leave amongst mass celebrations and fanfare with messages coming from the mosques of Kashmir. It is nothing but a collective conscience of those who did it can undo this tide of history. Otherwise, I have a feeling history will judge them harder than they can imagine.

This opinion article on Kashmiri Hindu Genocide was first published at the author’s personal blog rajatmitra.co.in.