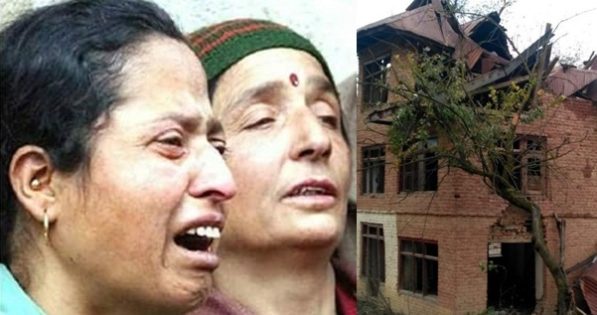 “Do you believe Kashmiris have changed in the last thirty years?” The question was from a young woman who introduced herself as a graduate student of psychology. “I have taken up psychological trauma as a course and this comes from belonging to a community in exile,” she said. I had just finished giving a talk about intergenerational trauma and how it is passed on generation to generation.

“I am Neha, was a few months old when we were forced to run away from Kashmir to stay in a refugee camp in Jammu. I can say I have never seen my homeland. Kashmir lives in my imagination and my parents turn silent when I talk of visiting it. I guess they don’t want to go back. My parents had to run away on 19th January 1990 along with half a million other people. We lived in a camp for two years before my father could find a job again. Whenever I tried to ask questions about when we will return to our home, there would be a stony silence. My sister would kick me under the table to remain silent.”

“As I grew up, I came to learn two important lessons. One is that our family’s running away was to be kept a secret from all future conversations. Never let anyone know you are ‘camp walla’ (camp people), a dirty word, my parents advised me everyday. The other was different. While walking back from high school one day, a man who rode past me on a bicycle stopped by my side and asked, “Kitna legi karne ka?” (How much do you charge for having intercourse?) That is the day I learnt that a woman living in a camp was considered a prostitute.”

We had sat in silence for a few minutes. I knowing that nothing that you say can reduce her pain and she knowing that she didn’t want any pity.

“I found out on my own and realized all girls in the camp faced it. All children learnt to protect themselves. We reconstructed the past on our own about what happened and shared it with each other in hushed tones when our elders would be silent. I soon learnt the reason for my Masi’s (Aunt) nightmares was because she was raped by a group of Muslim boys when running away. But it is something every Kashmiri lives with everyday. What I want to know if all these experiences have changed us from within?”

“This talk of intergenerational trauma makes me question some assumptions,” she said and added, “I have been studying communities in exile. Tibetans, Jews, Syrians and trying to understand what happens to them. Is our story somewhat similar?”

Neha is no exception. As I have found in my talks across the world it is the second, the third generation after the exile who want to understand the exile of their parents and their roots. The generation that ran away was caught up with survival to raise any question around roots or future. They were tired, fatigued by the trauma and are glad they could run away to survive.

“One last thing,” she said before I left, “I want to know if our community were victims of gaslighting? Will you tell me that?” she asked exhausted and sighed. “This is the first time I have spoken so much,” she added.

Two terms, intergenerational trauma and gaslighting. Many a young Kashmiri Hindu have asked me their meanings and if these apply to them. The ones asking the question have a few things in common. They are young, curious and grew up in a family where silence was the rule. The legacy of persecution binds you in ways that become a never-ending search for the generation after you. I often imagine Neha, a young woman searching for answers, reading and poring over definitions to understand what came over their parents while they ran away. She will then pass it to her children and they will pass it on till it becomes the defining narrative for the community. They will see pictures what once was a land called Kashmir from which they came and never went back.

I had promised her that I will send her an answer. I told her I needed to ask more Kashmiris, who had been victims of religious persecution. My answer had to cover the collective voice of half a million other people.

I listened to many voices, both that remained silent and those that didn’t after 5th August 2019 when the Article 370 was abrogated. I have tried to segregate them and categorize the main ones.

No one I spoke to had heard of the term ‘gaslighting’. It is a term that Neha’s generation has discovered to understand their sense of belonging, their identity. It is not part of any psychology textbook as yet. Trauma of a people thrown out of their homeland is not the priority for the world. It doesn’t warrant a diagnosis yet of what survivors go through in their journey of running away from perpetrators. It is still a personal narrative, a solitary journey surrounded by one’s own emotions.

My Kashmiri Muslim neighbors never answered my questions of why they did this to us, the Kashmiri Hindus. When I ask them why they chanted slogans coming on the road calling us kafirs, why every loudspeaker from the mosques blared asking us to leave if we don’t convert, they fell silent. When I ask why mosque after mosque told us to leave, why didn’t they protest, they say it was a mistake. The question still remains is why did they participate in that and why didn’t they condemn it?

When I asked him why he and other neighbors came out in their best clothes to see us leave and didn’t stop us, why he celebrated to make rice pudding at home for his children he fell silent. When I ask why they celebrate 19th January as a pious holy day every year, when the land became ‘pure’ he has no answer and says ‘haalaat kharab the, log nahi’ (conditions were responsible not the people). The above two words don’t match their actions, I told him. However, much you cry and hug me as your long lost friend, on that day and for thirty years you have not regretted your actions.

The above are two accounts where two men went and met their neighbors and asked them what most of them never asked before. Kashmiri Hindus have remained a scared community for five hundred years and till one day they introspect and change, nothing will change for them.

Neha and others of her generation will understand one day that this is what abusers do when confronted by their victims years later. They cry and pretend to be innocent. They often try to become the bigger victim. Germans tried to do that with Jews but didn’t succeed. Whites still try to do with Natives whom they exterminated. Every Hollywood movie shows the Native Americans attacking the peaceful sleeping Whites and their children. So, is there hope for the Kashmiri Hindu community? Yes, there is provided they understand what till today only a small percentage of them have realized so far.

Gaslighting is a tactic where in order to gain power, the perpetrator makes the victim question his own reality. In Kashmir, the Kashmiri Hindu has only begun to realize how much he was brainwashed by his neighbor, that how many blatant lies were spread to propagate that it is the Kashmiri Muslim who is the true victim and not the Kashmiri Hindu. The major part of the civilized world doesn’t know the story of the Kashmiri Hindu yet. He is anonymous, his existence unknown. It is his neighbor who is telling blatant lies about his victimhood, the newspapers and the institutions lapping it up hiding a truth covered by a hundred distortions and falsehood. They deny they ever carried out any atrocities. A slow insidious cancer, it has multiplied without anyone holding it back.

It is the young Kashmiri Hindu like Neha who is the hope of the community. They realize that what their perpetrators say mean nothing. So, when a Omar Abdullah says that Kashmir is empty without Kashmiri Hindus, he means nothing by it. When a Geelani says they must come back, what he means is that they must come back if they want to get killed. The ability to see the duplicity, the dishonesty, in their erstwhile neighbors have taken thirty yeas for some.

The generation of Neha and one coming after will not be confused. They don’t carry the trauma in the same way their parents did. They have begun to question and ask what their parents never dared to and that is to fix the blame where it belongs to, the average neighbor of every Kashmiri Hindu, who wanted him to go so he can take away his land and home. They want the blame for wrongdoing fixed on whom it belongs to and not forgive those who were responsible for the mass rapes, the murders and the destruction of their civilization, otherwise known as genocide.

“You know we Kashmiri Hindus were dependent upon our neighbors, believing one day they will let us in, when hearts would melt and we would come together. That bubble has burst after the abrogation of article 370”, a Kashmiri Hindu told me whom I was talking to about the issue. “What changed you?” I asked hoping for an earth shattering revelation. It was nothing of the kind he told me. He had called me after the abrogation of the article 370. “We often called up and spoke to each other like old neighbors and he always said how bad he felt inside for the exodus of Hindus. Expecting him to congratulate me, I asked him how he felt about the abrogation. His answer was something that shocked me. I haven’t come to terms with it as yet. I will see how the Hindus now come back. Tell this to all those who plan to come back. This will be their last visit to Kashmir. That day I understood his real nature. He was hiding from me his real feelings and I had believed him.”

Bob Dylan sang in his famous song ‘How many years can some people exist before they can hear others cry?’ The world didn’t hear the voices of the Jews, the Tibetans, the Cambodians and the Armenians. Today, one may add Kashmiri Hindus to that group and ask if the price of silence is not the price of our collective conscience that we are killing by staying silent? Till then, voices like Neha’s will have to search for answers and ask why?

This article was first published at sahforum.org.