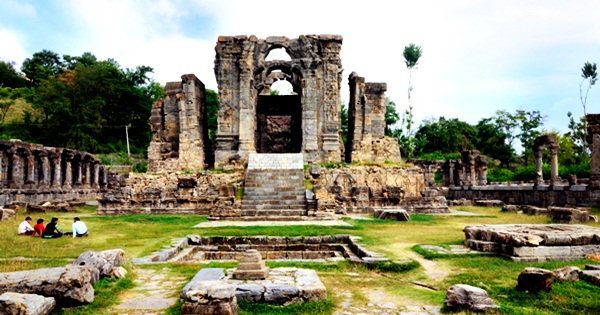 “Kashmir is an integral part of India.” The slogan catches my eye as we pass by Badami Bagh, the army cantonment. It flashes on an electronic board. This battle has to be fought beyond billboards, I tell myself.

Our driver asks me if this is my first visit to Kashmir. When I tell him no, he asks if anything has changed in my eyes. When I say things look better, he shakes his head, “It has become worse,” he says.

He is our fifth driver taking us to Pahalgam. As the security forces ask the vehicles to stop to let the army convoy pass, he shows no inclination to stop but does only when I tell him to.

He shows me the site of the Pulwama attack and I ask him to stop. He does so believing I want to see it like other tourists and tells me where the vehicles lay after the explosion and says 40 men were blown up. I bow down in memory of those who died and realize this act has made him furious. He spits out of the vehicle. We pass the rest of the journey in silence.

I am reminded of an incident where a pianist, unable to bear the trauma of people killed in an explosion in his city Sarajevo, played his piano at the same spot for the same number of days as the number of people killed. I wonder if some musician would ever think of doing it in Pulwama or say rest of Kashmir. Those army men who died should not live in our hearts as just a number.

The child in our group starts to vomit and we stop the vehicle. The driver is now angry and tells someone on the phone he is going mad with the child’s cry. An army man appears saying he saw us stop and came to check. Seeing the kid he says it reminds him of his own child whom he hasn’t seen for a long time. We are all parents and our children are with us. His child is not with him.

On our way we see a group of young men. “They are coming back after throwing stones.” The conviction in our driver’s voice is eerie. I try to find Anwar, the antagonist of my book ‘The Infidel Next Door’ in them. None of them look like the way I imagined. My psychologist’s eye tells me they don’t have one thing that Anwar had. The ruthlessness and idealism that Haji chacha instilled in him. I remember the stone throwers in Tihar jail on whom I built up my character. The present ones look different, hired for money. The movement has changed course now.

As for the protagonist, the priests, only a few are left with most temples of Kashmir deserted. Some who came on seeing us did the puja (prayer) and left. They looked scared. Do they know after they are gone, no one will come to fill up their places? Will there be an Aditya, the protagonist of my novel, anymore to come to rebuild his temple in Kashmir?

While visiting Martand temple we repeat the entire ritual of writing name, address, mobile no. Everyone does so. In some other situation I would have felt angry but I don’t. I feel a sadness whaling up realizing that this is for the safety of the temple. I remember entering religious places all around the world. Never did I have to identify myself. Why are then our Hindu temples so singled out for destruction? Can someone explain? Does it happen with other structures around the world? Will those who shout on ‘religious intolerance’ in India answer my question?

We all are surprised to see the presence of Muslim girls and boys roaming in the different temples and ruins of temples taking selfies.

In Martand ruins I notice them taking selfies besides the idol of Krishna. They are puzzled when we begin to touch the feet of the deities. Her friend calls out to her saying ‘Shazia stop’. For Hindus the ruins remain a temple. I remember having read that a recent Bollywood movie ‘Haidar’ had a dance sequence shot here with the statue of a devil put up in the main temple. The actor Shahid Kapoor had danced with his troupe.

It does seem some temples of Kashmir have a new identity now. A picnic spot to strike poses and take selfies. The old sanctity and sacredness destroyed and now the dance of the devil rules. A place where the infidel prayed once and now is left in ruins. Will more Hindu temples become tourist spots as time goes by? Will more temples of infidels destroyed by the faithful, join the list?

Is this the way history in India will get erased, identities destroyed and only memory remain?

Many years ago I had gone to Nuremberg stadium in Germany where German emperors used to take salute of their army and one that created German nationalism. It had shocked me to see empty beer bottles strewn all over. American soldiers roamed drinking on the stands. My friend, a German his lips pressed hard told me it was a thought out strategy after the war to kill German identity forever.

Whoever put up the devil in Martand ruins did something similar. Could the devil be put up at Vatican or Kaba and Bollywood stars dance there?

At Martand ruins, a tourist guide comes. He explains different idols and tells us that the temple was destroyed by natural calamities. I ask him was it burnt down by Sikandar Butshikan? He is taken aback. I tell him about Butshikan and how he got his name. He now tries to tell me I am right but to save his face points out how rains and snow is destroying the temple. How many people does he fool like this every day? I wish I knew.

Our driver tells us that in his twenty years this is the first time he has been to Martand ruins. I wonder why Hindus don’t go there anymore. It is as historical as Ayodhya, as poignant as Somnath and as magnificent as Kashi Vishwanath. Are we running away from a painful past and memory? How far will we run?

Once Afghanistan, Bangladesh, Pakistan had temples at every street corner. Today, all of them have been razed to the ground. Those that lie in ruins like Martand will have the likes of Shazia and her friends visit there, to take selfies.

Will the young Kashmiri of today ever know why his ancestors destroyed Martand? How his ancestors were forced to convert? Why a whole civilization, a way of life was destroyed without any guilt? The urge to destroy ends with self destruction. Will that be the story of Kashmir?

Long ago I had read in a psychological journal that the rebel youth of mass movements and the army, both strip the individual of his separateness and distinctness. Both demand self-sacrifice, unquestioning obedience and single hearted allegiance to the cause. Both make extensive use of make believe to promote daring and united action. Yet, this trip has shown this is not true. The Indian soldier retains his compassion and humaneness and no one has been able to strip him of that.

I pick up a newspaper on the way. An article in it catches my attention. It says there is an increasing rebellion in the youth and they are getting more suicidal. It says that Kashmiri youth now counter security forces during encounters by throwing stones. “Why is our youth acting so dangerous,” it wants to ask.

“The youth is coming together and becoming a collective. They are more suicidal, more provocative,” it says.

“Whatever the political leaders or military leaders may say, on the ground the reality is different. This suicidal behavior in the youth is going on a dangerous path. The separatist leadership, the intelligentsia and their silence are all responsible,” it says.

There are two kinds of hope that I have seen in Kashmir this time, one that acts as an explosive, wants immediate gratification and another one that teaches discipline and infuses patience.

The mass movement of Kashmir promises an illusion of immediate hope for its youth. A gateway to heaven for fighting ‘the infidel’ with virgins waiting for you in heaven if you get killed. What forbearance or compassion does it infuse?

Why did the land of Kashmir erupt into such a mass movement? Kashmir has been a stagnant society torn apart by betrayal. The fanatic of today was once a non believer and has had to prove his loyalty, his ancestor being forced by the sword to disown his religion for the new one. The script continues and hasn’t faded. What showed itself on 19th January 1990 was its termination but led to a movement that instilled in its youth a new passion for self destruction. But this time it has also left in him as an anonymous object with no willpower and judgment, a homogenous plastic mass that can be kneaded at will.

My professor, considered an authority on human hatred and evil, was fond of saying that mass movements rise and sustain without a belief in God but never without a belief in a devil. That the strength of the movement is proportional to the vividness and tangibility of the devil itself. His words are as true of Kashmir as with other parts of India. Will then any gesture of goodwill or concession reduce the volume or intensity of vilification that already exists? The answer is on the wall.

The movement in Kashmir was started by men like Anwar, the antagonists of my novel indoctrinated by Haji chacha to achieve their goals. Today, we need another set of men, men of ethics and morals who can snatch it from the hands of the fanatics like Haji chacha and give it back to where it belongs, so that it moves away from being a society made stagnant by historical forces.

Mass movements are responsible for the awakening of stagnant societies and Kashmir is no exception. Like all mass movements that brought about a change, the same may happen in Kashmir when an articulate minority, however small, finds a voice for its people that has been suppressed, as to why its people kept on running away over centuries and seven exoduses leaving behind their homeland, their honor and trying to preserve their roots with a way of life destroyed but yet to shaken the conscience of the rest of the world.