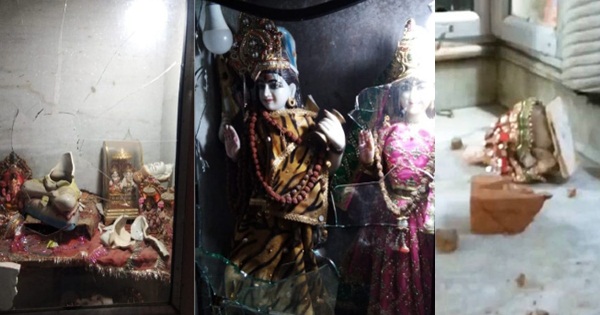 “Why is there silence over the desecration of the temple in Delhi? Forget the media and intellectuals, why are even the ordinary Hindus not speaking up?” A friend asked me in a get together. We both said as Hindus it is very painful for us.

“It is not the desecration of the temple that I find as painful as the silence that has come to engulf it,” I told him.

The silence has come to characterize our psyche and one that has remained unchanged for centuries.

A question on the mind of many is that is this the way the crowds destroyed temples in medieval times too? I believe there are uncanny similarities. The violent crowd then and now had impunity and worked under a religious injunction to do so. In both the Hindus didn’t retaliate or oppose and remained silent spectators. It brings to fore the close relationship between trauma and silence.

A memory comes to my mind. As a psychologist I was testifying as an expert witness on a number of heinous crimes. In one case the victim was a seventeen year old girl and the judge believed the accused was framed by police because the girl didn’t scream, shout or fight but stayed silent. Looking at the report where I had mentioned psychological assessment showed the girl suffering from PTSD, he seemed to have disbelieved it and asked if she was truly traumatized why didn’t she scream and shout but remained silent instead? Why didn’t she try to fight him?

“The girl remained silent, your honor, not because she was consenting to the accused but because the very nature of trauma is such that the victim falls silent under overwhelming threat to life,” I had told him and added that the psychological studies show the Broca’s area concerned with the production of speech in human beings slows down with almost very little activity when facing the traumatic event or traumatic memories are aroused. During the actual event, most victims are unable to shout for this reason. I quoted Bessel van der Kolk, the psychiatrist and pioneer credited with this discovery. The judge had listened and asked for more details which I could provide. I could see his mind towards the accused change after understanding the inner state of the victim and so did his sentencing.

Later the judge had called me to his chamber. He told me he wished he had known this relationship between trauma and lack of speech. He shared that while sentencing, every victim whom he had found not resisting, protesting or screaming against the perpetrator during the crime, he had let the accused go free believing the victim to be lying. “Today, I feel a little guilty of having done so,” and had asked me to give a talk at National Judicial Academy.

The same applies to soldiers on the battlefield, disaster survivors or survivors of atrocities. Their memory plays hide and seek with them through interfering with the Broca’s area and silence comes to rule over their memory.

Today, we know from researches that what applies to memory of individuals also applies to larger systems. Societies as a whole respond just like individuals. Based on that when they go through a collective trauma the individual members are unable to give words to it, sometimes for fear of life.

Perhaps the deepest trauma for the Hindu society has been the destruction of its temples and the Hindus have gone through it in silence and preserve their memories in silence. Is it any wonder then when each time a temple is destroyed, the Hindu society is unable to raise its voice?

The language of trauma is silence. For prolonged and overwhelming trauma, the silence is that much greater, deep rooted and lodged in our psyche. Silence is the tool by which trans-generational trauma is carried forward as Elie Wiesel said and is the keeper of our memories. Does that mean then for Hindus regeneration of their civilization will take place by breaking this wall of silence and need a healing touch? Till we find and soothe that raw nerve, as a society, will we find the peace within and the momentum to move forward?

I wonder how did the early Hindus react to witnessing of the destruction of their temples? It is not very difficult to imagine. Possibly it was shock and denial in the beginning that gradually gave away to resignation, a sense of helplessness and shame. When the number of temples desecrated reached thousands, the sense of what that led to is not so difficult to grasp. The horror of it would be stored within similar to discovering the Gulag in Russia, the famines that killed millions and the holocaust that killed millions in gas chambers.

When temples were destroyed in Kashmir, the Hindus in rest of India kept silent. I found no articles, no debates, no intellectuals discussing it. Today, when a temple is desecrated in Delhi, the silence of it is deafening. The roots of that silence lie in the trans-generational trauma living in the Hindu psyche described in my book ‘The Infidel Next Door’.

Today, we need men of action who will speak with courage about breaking this silence. We need men who are not afraid of confronting the past but who become the voice of a persecuted race that reminds them that once they were not slaves but masters of their fate. We need men who can rouse the sleeping conscience in our people and create an intellectual minority, however small, that creates a movement destroying the stagnant society we have become.

Deep inside our society there is a fault line, an opening that is now coming out in the open challenging our beliefs. The humiliation that resided deep within now refuses to be there anymore. The Hindu of today is also a Hindu with a choice who selects his own leaders, his own government and calls the country his own like he could never do before in his history. Should he not extend that to his religion for which he has been persecuted like followers of perhaps no other faith in human history?