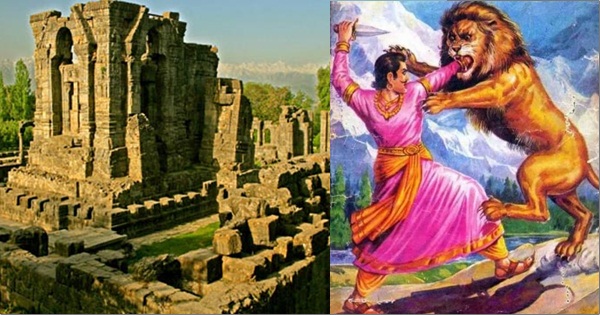 Kashyap’s Mira! Mira in Sanskrit means a huge lake, Sarovar. Rishi Kashyap is one of the Saptarishis, seven sages of the present Vaivasvata Manvantara. Those who belong to Kashyap Gotra are said to be the progenies of this Rishi.

Prajapati Daksha gave away thirteen of his daughters in marriage to Kashyap Rishi. Devatas, Danavas, Yakshas, Nagas etc, all are progenies of Kashyap.

There was a huge, beautiful lake amidst the Meru Parvat range.

Lord Shiva along with his consort Sati were very attracted by the beauty of the lake and were the regular visitors to the lake. Kashyap presented this lake to Sati. The lake was then called Sati Sar.

A demon called Jalodbhava started residing in the lake and started terrorising the people around the lake. People living in the vicinity went to Kashyap complaining and sought help. Kashyap called his Naga son Ananta Naga to plan a strategy to eliminate Jalodbhava. They decided to empty the lake and expose the demon and asked Lord Vishnu to destroy him.

Accordingly, a valley in the western side, called Varaha Mukh, (presently Bara mullah) was cut to let the lake water to drain off in to a land locked sea which then later called Kashyapa’s Sea (presently called Caspian sea). The demon then came out of the lake and Lord Vishnu killed him.

Partly emptied lake was then developed into a learning center for study of holy scriptures, Vedas, Upanishads. The place developed into a rich city of cultural heritage and thus named Srinagar. Anantnag, the Naga son of Kashyap built another city in the neighborhood of Srinagar which is now a district Headquarter Anantnag.

The entire Srinagar became very famous. Devi Gauri and Ganesh were the frequent visitors. The route through which they were using was known as “Gauri Marg” – the present day Gulmarg!

Based on Nilamata Purana, Kalhana wrote Rajatarangini which is an authority on Kashmir. All over the world, researchers on Kashmir use this great work as reference.

The most simplified version of this book available in English is written by a British archeologist M A Stein. It is in three volumes.

Whose Kashmir is it Anyway?

Adi Shankaracharya visited Kashmir in the ninth century. Kashmir was then the prominent seat of Shaivism. At Gopaladri hill, he composed “Soundarya Lahari“, expounding the union of Shiva and Shakti. This hill in Srinagar is now called Shankaracharya hill.

Next day the couple got shocked on learning that they all didn’t eat anything. Disciples said that there was no fire.

The lady took some water and sprinkled on the firewood. Lo and behold the wood caught fire instantly. This was a great revelation to Shankara. He realized that there was lot to learn from ordinary people of Kashmir.

In the 11th century Ramanujacharya visited Kashmir. Here he wrote Sri Bhashya based on Brahma Sutra which was available only in Kashmir. The book was shown to them only in the library and they were not allowed to make any notes.

Every day Ramanujacharya and his disciple Kurutthalwar would sit and read in the library, remembered word by word what they read. They came back to Sharada Peeth and reproduced it in a book format. This went on for three months and then finally Sri Bhashya was completed. This became the Moola Grantha of Srivaishnavas.

Kashmir Goddess of learning Sri Sharada appeared before Ramanuja and blessed him by presenting an icon of Hayagreeva.

Whose Kashmir is it Anyway?

As per Nilamata Purana, Kashmir has a recorded history of over 5100 years. Entire population consisted of Hindus and Buddhists.

While Islam was making forced entry elsewhere around the world, it was kept away from the western borders of India. Thanks to brave Kings of Lohana dynasty. Lohanas were the great sword fighters in the army of king Lava. The present day Lahore was Lavapuri of Ramayan.

In the 13th century Raja Ramachandra was ruling Kashmir.

Dulcha was big-time docoit from Turkistan who entered Kashmir with heavily armed, hired goons and looted the region. This was repeated on regular intervals. While Dulcha’s raids were mainly to loot the rich Kashmir, the major disaster was just about to knock the door.

A region with a history of 5000 years of Hindus and Buddhists –  in the last seven centuries it now has 97% Muslims. Who started this all?

It is such a paradoxical situation that the Islamisation of Kashmir started with a Bhudhist prince called Lhachan Gualbu Rinchan.

Rinchan killed Raja Ramachandra by deceit and took control of Kashmir. He then wanted to convert to Shaivism from Buddhism along with his subjects. He approached the head guru of the Brahmin Pandits, Devaswami for this purpose. However his request was spurned by the Shaivite guru who refused to accept him into the Hindu fold due to his hand in killing Ramachandra.

Infuriated Rinchan now gets converted to Islam along with his subjects. The strong citadel of Hindus came crumbling down and the floodgates were opened to the invaders.

History once again repeats itself in a similar situation, much later though.

Another descendent of Lohanas, Punjalal Thakkar of Kathiawad, created shockwaves in the vegetarian community of Lohanas when he started business of selling fish. The community boycotted him and infuriated Punjalal went to Karachi and converted himself and his family to Islam.

“Those who forget history are condemned to repeat it”.