The Curse of Sadhvi Pragya and Her Message to a Nation 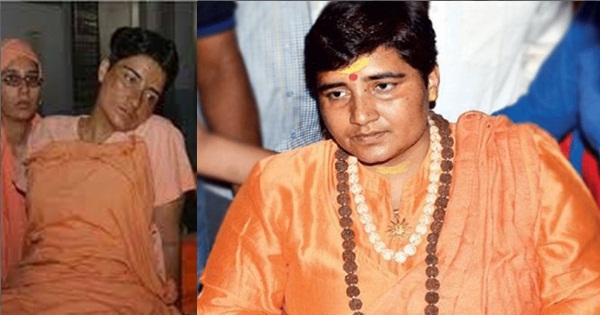 The curse has always played a role in India’s history, during its most critical times. The curse of a woman wronged and asking for justice has brought many a perpetrator down to its knees. The curse of Seeta decimated a nation. The curse of Draupadi brought down a dynasty. Will the curse of Sadhvi Pragya also change the impunity of those who torture and the rot that has seeped in?

India is a land that has celebrated and respected womanhood. Then how do we explain the torture of Sadhvi Pragya to our consciousness?

Sadhvi Pragya had cursed the policeman who had tortured her brutally to extract a confession. Then she said it was her curse and karma that he got killed. Intellectuals jumped to define it as an insult to a martyr who had died fighting terrorists, no matter whether he tortured her or not. She was asked to apologize to be politically correct and say it was because of her personal experience. But in doing so she has brought forward an important lesson of history which is often forgotten that it is the ‘personal’ which is the ‘political’ and that is how we fight injustice. When the two are no longer separate, they become a force. History of many a movement is witness to that.

Torture destroys not only the mind and body, but also our soul. It fragments us and makes the world look terrifying where people can’t be trusted anymore. Researches show most survivors don’t feel whole again and withdraw from people and everyday reality. It is what the perpetrators who tortured Sadhvi Pragya thought and assumed would happen to her too. That she will never come to fight back. But she has proved them wrong and it may become a turning point in our nation’s history.

She survived an ordeal and no one came to support her. Torture survivors become alienated for life due to this, the shame they face and lose their voice. She is the exception who found hers by transcending her shame of torture. If it reverberates in Parliament, it may well shake the conscience of a silent nation.

The vicious beating of Lala Lajpat Rai by British police didn’t silence the generation then but produced a Bhagat Singh and a Rajguru. The torture of Nelson Mandela made him a wholly different man inside the prison who couldn’t be broken down. The torture of prisoners inside Cellular Jail made them write with bare hands on the prison wall so that their story is not forgotten and fanned an anger that brought down the British empire. Torture can also liberate from the fear of death and Sadhvi Pragya is one of those who has felt it.

In torture, our bodies are violated in a most intimate fashion. Nothing remains private. Our innermost feelings become open and get lodged in the body to become a memory that may never fade. For a rare few, something within rises to draw attention to an injustice that was not answered, in this case ‘the narrative of secularism to be foisted on Hindus’. Is that why the critics of Sadhvi Pragya would like to see that her torture stays personal and doesn’t ever become political? Will her curse not destroy the impunity that the votaries of secularism have had enjoyed and that is why she is dangerous?

For her perpetrators she was the character of a narrative they had constructed, the story of Hindu terror, a sure way to stop the Hindus from becoming self aware. Those who tortured her never thought that their story would fail and she would find prominence. A frail woman, that too a right wing monk has risen from being ‘dead’ to confront them. It is a challenge every braveheart from the secular brigade finds difficult to face and is that why the panic?

A torture survivor, like her, only died, went mad or got killed. She has escaped her fate. Her withdrawal would have buried many a truth, ended many a chapter and built the narrative that would have bound the Hindus in guilt for a thousand years more. A Hindu woman monk caught creating bomb blasts. Isn’t that what we told you about Hinduism, the most intolerant religion of the world? That she is ready to fight back, will it be the death knell of many a story, especially the intolerance of Hinduism, one that the ‘secular India’ was based upon?

Sadhvi Pragya is a torture survivor, but not by choice. Her perpetrator is a martyr by accident only and not by choice. If the stray bullet from terrorists hadn’t hit him on that fateful day, he would have been regarded as one who protected the nation from the wrath of Hindu terror.

Sadhvi Pragya has shown that a woman rooted in Sanatan Dharma can stand up to the imported secularism that defines the India of today and that its brute power, copied and pasted from masters abroad is no match for her courage. A sure heartburn for those trying to evangelize India by saying Hinduism is a bizarre faith for the intolerant. Every time she was hanged upside down by some of our ‘appointed brave’ police officers with the instruction that she should capitulate and confess to the script of Hindu terror, it was perhaps her ‘Sadhana’ and ‘Dharmic mind’ that stood tall.

Why is a police officer who tortured a woman by stripping her naked, called a hero, one who tried to shame a woman? Is it not worse than the gang rape that we read about everyday in our papers and ask ourselves why it is turning banal?

The curse is what a woman has fallen back upon in every age when she faced an intolerable reality and there was no justice against the evil. The curse has symbolized what was wrong in the society. The curse wasn’t just against a person but the very system in which evil survived with impunity amongst silence.

Will the future generation forgive us if we don’t listen to that voice today? And what will we say to our children why everyone kept silent and didn’t speak up? Who then will our nation claim as her conscience, the abuser or the survivor?

Many survivors lose faith in the system because they trusted it to protect them and withdraw into a shell. It is the rare one who turns around and stands up to undo a wrong and fight for justice. It shows a nobility of spirit and the deepest civilizational value for a race. It is in destroying the very evil that has been protected with impunity and nurtured, seeing no one else goes through the same, that a nation’s survival and greatness lie. I pray that Sadhvi Pragya’s journey to Parliament and her voice afterwards does that to our conscience that fell silent.