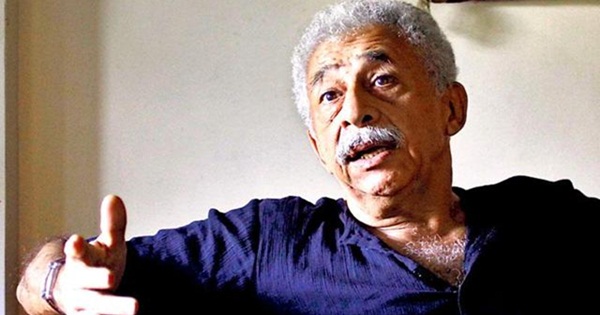 Naseerudin Shah has shared that he is scared for his children of living in India and it has gone viral. To give his fear a shape and credibility he has even linked it up with an incident in far off Bulandshehar in Uttar Pradesh where a police officer was killed. What is the connection between this incident and his own fear he hasn’t explained. But the message he sends is clear. Every Muslim according to him has a reason to fear living in India.

An old adage we were taught in psychology schools comes to mind. When a person or a group of people feel something inside, they look for a cause outside of themselves and if they don’t find one, they invent one and believe it to be true. Naseerudin Shah seems to have done the latter.

Our male stars in Bollywood are known for their inter-religious marriages and almost all of them have lived happily ever after post-independence. So have their children, some of whom are being launched to national audiences. No one has asked them questions about their religious beliefs. It won’t be an exaggeration to say as Indians we have had a fascination for our star children and they for us. The stars and their children have lived in harmony for the last seventy years in our country amidst the very people. To the best of my knowledge no one has threatened them about their religion in public, least of all anyone from the so called right wing. My guess is if and when they do divulge their identity in public, they are asked for selfies and autographs and not had to run away. They occupy major space on every social media and adulation of a million Indians. So to say that now the same audience is baying for their blood is perhaps coming from a source that requires some analysis and soul searching.

Many years ago I was in South Africa. While discussing the period of transition from White rule to Black rule, one of the colleagues, a Black sociologist, told us they had observed a peculiar phenomena during the period when the apartheid was under attack. The Whites had started to create imaginary fears about the safety of their own and their families from Blacks by making bizarre stories between unrelated things.

“What was the reason for it?” some of us had asked. “Surely they couldn’t be building it out of thin air.”

“No, but that is exactly what it was,” she had said. “They made up stories about how they feel threatened from Blacks and how Blacks will massacre them and their families.”

“It came from a perception that a radical change in power structure in their society was taking place and the dispossessed Blacks were finally getting the power in their own hands. The Whites didn’t want that to change. They feared that with the change, the genuine anger of the Blacks will overwhelm their actions and make them demand and ask for explanations for all the injustices done to them. Their fear was palpable considering how much atrocities they had committed on the Blacks and the notion that the Blacks take revenge.”

“Did the Blacks ever do that?”

“Nobody did because of the leadership of Nelson Mandela and Desmond Tutu who gave a call for truth and reconciliation. But many Whites secretly felt guilty and ashamed that they wouldn’t admit as to how shamelessly they had oppressed Blacks and their inner beliefs that they were sub-humans and not deserving of respect. They knew in their heart of hearts how they had oppressed them for centuries and now was the time for redemption. They felt once the Blacks become aware, they will rise in rage and reciprocate.”

A professor in psychology who had worked on civil rights in America talked of a similar phenomena he had observed in the Whites in the fifties and sixties when civil rights movement was at its peak. He saw the guilt, the shame in Whites over owning up the past and trying to deflect it by making up of imaginary stories. That was the primary reason why the Whites didn’t want to let the Blacks become their equals. They feared that the rising Black anger will overwhelm them and therefore, the Blacks must remain subservient.

Everywhere, in all parts of the world whenever there is a structural change in any society, the power equilibrium changes. When a population rises from the slumber their oppressors fear that those of whom they have tortured will ask questions and take revenge.

Closer home the British left India in 1947 suddenly and abruptly. Recent records that have been unearthed show that they felt a terror when they realized that Indians are very close to identifying with the atrocities of 1857, Jalian walah bagh and Andamans and lead a revolt, one that may be difficult to control.

The broken temples of India, the numerous insults and the humiliations the majority had to face and still does demand answers that the guilty mind of many here have a fear about.

Perhaps the Muslims of India felt too during the freedom struggle that once free and Hindus have the majority and become powerful again, they will remember the atrocities and that is why they wanted a separate country. Many Muslims had left but did they leave behind this fear in the minds of the fellow Muslims who didn’t leave?

Today, perhaps the deepest fear of a few in India is that this structural change in the power structure will make them once again answerable and ask questions of themselves that they have avoided so far. It is their belief that the memory of their atrocities on the Hindu majority is finding a voice and can lead them to further exploration of the atrocities and the tragic past that some of our scholars, intellectuals and historians have tried best to cover up.

To me that may explain the bizarre stories and narratives about intolerance of Hindus. I hope that better sense prevails and those who think so may learn from history about the empathy of Hindus, correct themselves but at the same time take cognizance of their ancestors actions and not deny the reality.

Indians, especially Hindus, have been deeply resilient in the past in every period of society through compassion, forgiveness and tolerance and will continue to be so.

The Curse of Sadhvi Pragya and Her Message to a Nation